Columns
The Voice
From Where I Sit – Gotta Love It

It’s no secret I love words. I know they can be used to inform or mislead, to uplift or destroy, to amuse or annoy, to clarify or obfuscate. A hundred years ago when I was an elected official, I believed that if I chose the right words, tried different ways of saying something, spoke at the level of the listener, I could make anyone understand anything. Unfortunately, it ain’t so. Some can’t understand, others don’t want to understand.

So, for someone who loves words and is fascinated by politics, today offers a perfect storm. Not only is there a bizarro world unfolding daily south of the 49th, there are potentially exciting days ahead in Alberta politics. Based on vote results within both the Wildrose and PC parties this weekend, it appears the United Conservative Party will come to fruition as a merger party. In addition, municipal elections across the province will happen October 16th. Let the games begin.

Effective speakers are warned not to use jargon or acronyms because it distances the speaker from listeners who aren’t in on it. Communications pros and spin-doctors protecting politicians and others under attack have turned speaking without saying anything into an art form.

So naturally, I started a list. A list of the most clichéd, offensive, condescending, muddying phrases, or outright alternative facts that are so insidious and common, we no longer recognize them for what they are: bullshit. Here are a few weasel word doozies, with context, where possible:
 “Let me be clear” (actually, anything but)
 “We are bending the spending curve”
 “A lot of work is still to be done”
 “We’re smoothing out the costs” (Ontario minister trying to fix hydro bill costs)
 “I am unable to comment” (US Attorney General Jeff Sessions during his confirmation hearings)
 “We’re working very hard to resolve insert crisis here. Let the committee, commission, board do its work.” (usually Liberals justifying yet another study or consultation process)
 “We’re getting into the weeds” (usually US political news hosts)
 “Speak truth to power” (Can’t those damn Republicans rein Trump in?)
 “We’re going to invest in the things necessary.” (provincial treasurer Joe Ceci before budget)
 “Green shoots” (ahhh, look signs of something new and oh, so good)
 “This government thinks it can tax its way to prosperity.” (opposition parties everywhere)
 “At the end of the day” (maddening in its frequency)
 “Binary choice” (decision between two alternatives)
 “We’re creating jobs, good jobs” (every government all the time)
 “We want to change the narrative” (no kidding)
 “Fundignation” (used by columnist Graham Thomas meaning increasing the level of indignation also increases the fun, usually by opposition members)
 “Relitigate” (favourite phrase of US political hosts and pundits as they regurgitate whatever the topic at hand, ie: number of people at the inauguration, how many illegal voters there were, etc)
 “We need to chart a way forward” (in an Athabasca University report)
 “They are trying to thread the needle” (maneuvering a dicey political situation)

Words like contemporaneous (former FBI director Jim Comey made these kinds of notes), emolument (Trump’s personal enrichment by virtue of his office as president), memorialize (Comey documenting the substance of meetings right after they happened) drove me to the dictionary. Gotta love it, from where I sit. 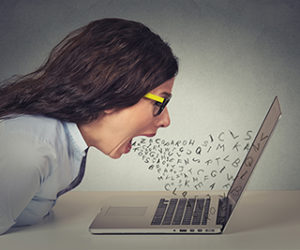 “And if anyone objects to this union, speak now or forever…”