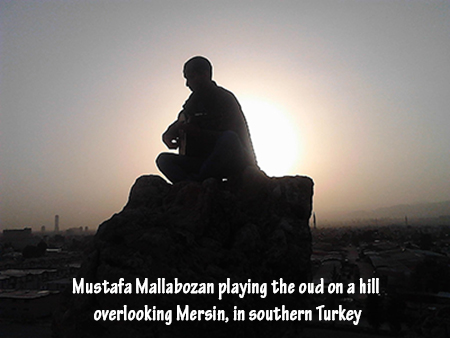 I first began texting Mustafa Mallabozan, a Kurdish musician from Kobany, in 2011 on a language-learning site. Id been using the site officially to learn other languages and unofficially to gather narratives from people in strife-torn Middle Eastern countries. I wasnt eager to learn Kurdish, but I did want first-person accounts of the Syrian war. Mallabozan wanted to practice his English, so it looked like a win-win.

I’ve corresponded with him off and on since the civil war began. Since then hes been imprisoned and tortured, has lived in refugee camps, and has traveled across Syria, Iraq, and Lebanon. He now lives in Austria, where he plays his oud with local musicians and studies German.

In 2011 I wrote a series of articles about Mallabozan for the Voice (beginning here), chronicling my disappointment and rage that the stresses he endured were so great as to render him unusable as a witness even to his own circumstances.

One of the more tragic effects of violence is to silence the voice of suffering by rendering victims so deeply disturbed that theyre no longer capable of faithfully relaying their suffering to the outside world. Could such maddening violence also silence music?

In Mallabozans early years music had been to him a priceless splendor filling his heart with joy and uniting him with his family, his people, and with all of humanity, alive and dead. His first instrument was one hed fashioned from a metal box and a wooden stick. As soon as he could afford “real” instruments he practiced for at least ten hours a day for three years, from 2006 to 2009, with no teacher.

“Because of the big amount of happiness,” he writes, “I was just laughing loudly, kissing my instrument as if it was my life partner.”

The other 14 hours were spent listening to music.

“The music I listened to when I was younger, it was talking to me. For example, Muhammed Abdulkarima Syrian bouzouki player called the Prince of Bouzouki his playing used to speak to me. For years I would listen to his playing before I slept, and his playing was talking to me in real words, each musical sentence of the prince was a word sentence and someone telling it to me.”

He continues to play oud and bouzouki today, but his heart isnt in it to the same extent. He claims his playing doesnt sound like it used to. He even finds it harder to listen to music these days.

“I don’t remember the last time I wanted to hear music,” he confesses. “I prefer silence to notes. I enjoy it, really; it’s maybe a kind of dead soul in a living body. But it’s like this now.”

If Sam Bakers story shows that victims of violence are able to form significant, healing musical statements, Mallabozans proves that the musical brain itself is somehow threatened by organised cruelty. It wont be easy for anyone to convince me now that terrorism and tyranny cant destroy music, because I’ve seen that for at least a little while they can.
I was now neck deep in the music and political struggles of the peoples of the Middle East, the long, strange unwinding of the sins of the twentieth century and the inescapable myths of the ancient world. I developed an intense curiosity regarding the music of the slave, the exile, the rejected, the refugee. It all begged the same question:

If cruelty can silence music, why does the purest and most beautiful music nearly always begin with slaves?

In Conversation With . . . A Syrian Kurd, Part III