Articles
The Voice
All the Music be Happenin’ Now – Chapter 6: Gnawa 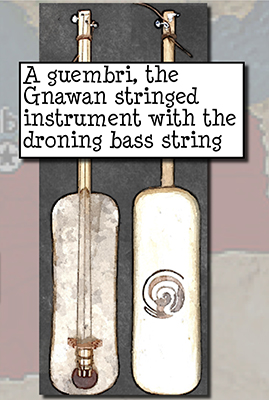 And now to backtrack just a little, to just before the dawn of the Arab Spring.

I was first drawn to Moroccan music in 2009 while reading The No-Nonsense Guide to World Music, by Louise Gray (Gray, 2009). Gray chose a thoroughly postmodern structure by building her book around the most moving and influential musical genres the world over, genres I described in my review as “fountainheads of primal musical energy.” The genres that stood out were Spains fado, Greeces rembetika, and, most of all, the Sufi music played in the Djemaa el Fna marketplace in Marrakech, Morocco.

I soon learned that nearly every regionsometimes every cityin Morocco had its own musical tradition, some more vibrant than others, and that much of the music carried the voice of resistance. This fact, combined with peculiar cultural conditions and a tumultous history, made the country look like a powder keg.

Morocco has long been a relatively repressive country and in 2009 was becoming more so. Poverty, high youth unemployment, corruption in government, severe restrictions on freedom of speech, and religious rulesstrict to the point of exasperatingwere creating a stifling hopelessness. Moroccan blogger and poet A.T.B. summed up the Moroccan youth experience as a schedule of glorious escapes with American television followed by daily rude awakenings:

Happy, man!
just happy!
until we grudgingly shuffled outside
to find the horizon had sucked
the sun in leaving behind
a smudge of colors like a
fly swatted against the wall
and our nightmares standing
out there patiently waiting.
– A.T.B, 2009

A.T.B. had also written a post about El Bashir Hazzam, a student blogger from Taghjijt, close to the Saharah in Moroccos Guelmim province. El Bashir had blogged about a peaceful student demonstration and had also published the students condemnation of the police for their heavy-handed reaction. Taghjijt was then placed under a curfew and local Internet cafés were either closed or placed under surveillance to prevent news of the incident from reaching the outside world. El Bashir was charged with “spreading false information about human rights that undermined the kingdoms image” and sentenced to four months in prison.

I found El Bashirs Facebook page and quickly began communicating with his brother, Abdellah. El Bashir, now in jail, could only speak Arabic, but Abdellah, studying for a degree in French, was able to answer my questions. In the process of the series of articles I wrote about El Bashir for the Voice, El Bashir went to court and was acquitted, due in large part to the relatively large amount of public attention his case garnered worldwide.

His thanks to me and the Voice for our small role was gratifying, for sure, but I had a heap of music to explore. Abdellah graciously continued communicating with me, sharing information about his region, the Moroccan Sahara, and the music played in his village, until his fiancée quite understandably demanded he stop texting with other women.

Back to the language site, where a request to learn French and Arabic won me several language partners from Morocco. Most were enamoured of the rai music of Algeria (more about that later), but one Moroccan sent me an mp3 of some of the most haunting music Id ever heard. A woman with a stirring voice sang from the point of view of the nurse of Prophet Mohamed. My source said the genre had been created by sub-Saharan slaves sold in Morocco. It was called “Gnawa,” a term I didn’t remember having seen before, even in the aforementioned music guide. But it soon became clear that the “Sufi” music Louise Gray had heard in Marrakech was Gnawan.

It was all starting to come together. I was soon privileged to meet Driss Akjij of Meknes, a fountainhead of Maghrebian musical assistance. In the coming years it was Driss who helped me translate the Arabic and Berber dialects on the North African albums I was now voraciously devouring and scribbling about, Driss who explained recent Moroccan music history, and Driss who suggested new artists.

I became convinced that the unique history and cultural conditions of the Maghreb at this time were about to lead to some earth-shaking political changes, and I imagined this would begin in Morocco. I wasnt very surprised when the following year the first domino in a series of civil conflicts fell in the Maghreb, but I was a little taken aback to see the unrest exploding first in Tunisia. The Jasmine Revolution, which turned out not to be a revolution at all, sparked the series of events in the Arab world that continue causing tremors today.

Talking with victims of these conflicts was devastating. The only way to stay sane was to keep my mind on the soundtrack. The questions now occupying my mind were these:

What is it about the Sahara?
Why did the experience of crossing it change people forever?
How did this great desert generate such incredible music, music that lies at the center of all music like a jewelled navel?