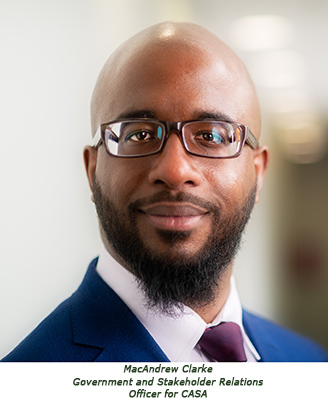 MacAndrew Clarke is the Government and Stakeholder Relations Officer for the Canadian Alliance of Student Association (CASA). After a recent conference, he was kind enough to take the time to have a brief interview with Scott Jacobsen about what he does and how it matters for the organization and for AUSU.

What is your background and how did you find out about CASA?
My background is in Political Science, I studied at Carleton University. I also have a minor in music history and co-op education in politics. I found out about CASA shortly after my work in Brampton, Ontario.

I was always looking for an opportunity to work in government relations or stakeholder relations because it’s much tied into what I always did in Montreal, my hometown: lots of community service with community organizations working in at-risk neighborhoods. I’ve also volunteered on a federal election campaign for an independent candidate and I did some volunteer work here and there for a federal political party, and for a municipal party in Gatineau. As well, I’ve always found non-partisan politics to be interesting. So, to me, CASA was that nonpartisan advocacy.

What I’ve learned about this field is that the more you know the more you don’t know, and the more I started finding out about the system the more I discovered that effective advocacy lies within non-partisanship because, at the end of the day, it’s about finding common ground. You and I may have different understandings on, let’s say, taxes, but surely we can come to an understanding of the importance of jobs and how that can affect a person’s livelihood.

What is your position now and what are your tasks and responsibilities with CASA?
My position right now is I’m the Government Stakeholder Relations Officer for CASA. My task is to build bridges and help student leaders meet with MPs, senators, parliamentary staffers, and stakeholder organizations that work closely with the advocacy priorities of CASA; organizations like Universities Canada, Colleges & Institutes Canada, and Polytechnics Canada, are examples of people that we dialogue with on a regular basis. We also have reached out to the Canadian Association of University Teachers. My job is to look for a way to get as much information about a particular issue and then share it with the membership of CASA, so that soon the leaders will feel prepared in sitting in front of any decision maker or policy maker and basically deliver the ask in a way where theyre going to feel confident, that in a way that the person that theyre sitting in front of will understand and hopefully absorb to incite them to take some action.

From the point of view of the Government Stakeholder and Relations Officer for CASA, why is CASA important to the 250,000 plus members that are a part of it?
I say CASA is important for those 250,000 students because every single one of those students can rest assured that there are some great and awesome student leaders that I made that presentation to, that are out there and that are willing to fight for them. My job, which is something that I should have said in the previous question, is also to empower and equip the student leaders to continue to stay in that role. Advocacy is not easy and neither is lobbying, especially if youre sitting across the table from somebody that you don’t know or somebody that you feel that is opposed to your ideas. This is about trying to find common ground, trying to find an understanding, and that requires a certain amount of depth and flexibility, which is something that I’ve always seen from the student leaders since I started working in November. So thats the reason why I got up there and did the presentation I did and thats why I still feel that CASA is important because this is the way that change works. Sometimes it would be great if things would move faster, but as I said in my presentation, Barack Obama said that: “progress doesnt always move in a straight line.”

Any final thoughts?
Clarke: The work that youre doing is the thing I like to see, which is to see young people getting engaged in politics and then seeing the importance in it because, at the end of the day, you are the future. Every single person in that room is going to be the future. Theyre going to go on to do great things. But this experience that student leaders are having right now is one of the best things they will ever have, but the reason I emphasized in the presentation that it is not about them is because each and every person in that room is there because of the 250,000 students that represent CASAs member Associations, as well as the 77,000 students that the Quebec Students Union has brought forward through their partnership with CASA as well. So there are some strong voices that are there because of the students, and because that relationship is always ongoing and theres always going to be a cycle in terms of advocacy. I said in the presentation; it never ends. We can only go onward and upwards, right?