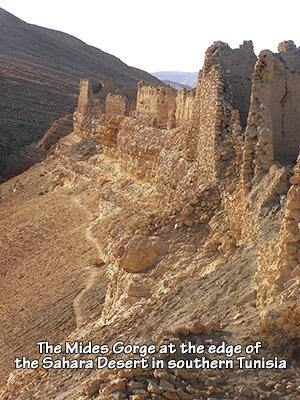 At the edge of the world
A series of bizarre and unforeseen events found me, on New Years’ Day, 2015, standing at the edge of the Sahara Desert. I stood, gazing, spellbound, over golden canyons radiant with the phantoms of the vegetation that had once thrived there and echoing the voices of peoples who’d traversed the area for centuries.

I’d become convinced that most of the music in the world could be traced back here. A hard theory to prove, but one to which I clung like a leech. It seemed like every existing musical genre I could name had at least one historical link to the Sahara. I had made the connection between the Sahara and north Mississippi blues in a series of articles (beginning here) for the Voice and backed it up with as much research as I could find.

Why the Sahara?
I was still intensely curious as to why the Sahara should be the historical origin (or at least the primary inspiration) of so much phenomenal world music, including American folk, blues, rock, and jazz, Celtic traditions, European fado, rembetika, and flamenco, and North African rai, gnawa, and mezwed. It formed a kind of helix where music returns to its roots, like spawning salmon, to inspire and be inspired in return (as modern blues players are now influencing desert musicians) again and again.

One element of the desert’s creative power is its longstanding occupation by Berber tribes, an ethnic group indigenous to the region from long before the Arabs arrived. Berber cultures still thrive in the Sahara and North Africa despite having so mixed with Arab culture that one can’t always separate the one from the other.

Although most simply call themselves “Berbers,” the term also applies to many subgroups, including the Tuareg, the Kabyle, and a subgroup of Jewish people (called Djerba Berbers because of the island in Tunisia they’ve occupied for more than 2,500 years). The Berbers are famous arts lovers, adoring dance, music, fine textiles, elegant architecture, personal adornment, and good food. At the same time, their history shows them to be fierce and uncompromising., They suffered a longstanding slave-trading practice, the tragic means by which North African rhythms, instrumentation, modes, and tonalities entered America before the civil war.

The Berbers weren’t the only tribe to exert great influence on world music (the Sub-Saharan Hausa peoples were almost solely responsible for creating Gnawa) and yet their influence eclipses that of other tribes because of the control they exerted over the Saharan trade routes. Because of their love of music and their command of the desert’s “crossroads,” the Berbers helped bring the different musical genres to all portions of North Africa and beyond.

The desert has never been a welcoming place. The countries in and around the Sahara have histories of violent struggles with European colonisers. In addition, criminal and extremist groups have and continue to hide and carry out their nefarious practices there. The difficulty (if not hopelessness) of policing the unsettled region makes unguarded exploration a treacherous undertaking. And then there’s the danger of dying for want of food, water, and shade. Some true accounts, for example Captain James Riley’s 19th century Sufferings in Africa, paint a harrowing picture of long, forced treks through the desert at the mercy of heartless kidnappers.

But many voyages through the Sahara were made under more favourable conditions. Ever since the Prophet Mohamed began instructing his followers to make pilgrimages to Mecca, millions of Sub-Saharan and North African Muslims have journeyed through this desert en route to the Holy City. I’ve talked to several Muslims who were not all that religious before taking this pilgrimage but who later claimed the trip to be a profoundly spiritual experience.

As I looked over the great expanse of sedimentary layers, canyons, sand dunes, and rock formations in the golden twilight I tried to imagine a pilgrim’s return. Having been to Mecca, what must it have been like to digest the experience during a lengthy camel trek through such a hauntingly beautiful landscape, with nothing to entertain you but a few hand drums, flutes, stringed instruments, poets, and storytellers around the evening fire?

I wanted to stay here forever, to see what poetry and music I might produce. But circumstances weren’t in my favour. I returned to Canada where I met a guy named Sid from Oran, Algeria, a former music producer who knows a heck of a lot about rai music and who goes so far as to claim that the currently fused “world” music began with his compatriot, rai star Cheb Khaled.

This doesn’t conflict with my theory, but it does point me outward, away from the Sahara, to follow its influences in a host of other directions.