Articles
The Voice
All the Music be Happenin’ Now – Aïcha, Aïcha 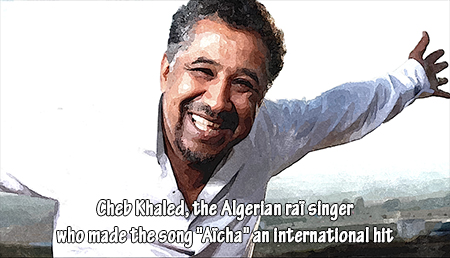 If you want to discern the secret ache of the Arab heart, you need look no further than the song “Aïcha,” co-written and sung by the iconic Algerian singer who popularized raï music, Cheb Khaled.

In the year of its release, 1996, “Aïcha” topped the charts in Germany, Belgium, the Netherlands, Switzerland, and France, and its popularity continued to spread to other European countries, where, despite being sung in French and Arabic, it remained a hit until at least 2003.

A song about bars of gold
I was deeply moved the first time I heard “Aïcha,” finding good reason for the song’s phenomenal popularity: The music is tender, sweeping, passionate, beautifully arranged, and sung as if the singing itself could mend this broken world. But most remarkable are the lyrics. An admirer’s heartfelt but conventional vow to smother his love object in jewels and other niceties if only she’ll stay with him forever is met with refusal. And what a refusal:

Keep your treasures
I’m worth more than all that
Bars are bars, even if made of gold. (translated from the French lyrics)

What would it be like to be loved like this, to remain unmoved by promises of treasure, and to have the integrity to demand something better?

Declining Western luxury?
The song has a metaphorical dimension; it’s as if the Arab world itself were being asked to sell its beauty and richness for the baubles of consumerismand politely declining. What an amazing culture the Arabs must have, and what insects we in the West must be for warring with these noble people, stealing their resources, and denigrating their spiritual traditions!

The real picture
Later, when I lived in the Arab world, I was disappointed to find so many young girls whose sole hope lay in nailing a rich husband so they could live the luxe life they saw on television. I saw parents refusing to allow their grown daughters to marry men they loved simply because the men didn’t yet own homes. Marriage was rarely seen as a loving union to be nurtured, and married partners were discouraged from showing affection to each other in front of others.

I learned that passionate love songs like “Aïcha” weren’t considered family listening. They were rather part of a tradition that might be heard in adults-only situations like nightclubs and single-sex wedding festivities.

I also discovered that Khaled’s co-writer on the song “Aïcha” wasn’t Arab at all, but the French Jewish songwriter Jean-Jacques Goldman. So much for my view on the secret of the Arab heart.

Speaking the unspeakable
But then I met Sid, who’d grown up in Oran, the same city as Cheb Khaled, and who’d been friends with Cheb Hasni, the raï singer murdered in 1994 after having received death threats from Islamist extremists.

According to Sid, raï music is socially redemptive, airing, in the harmless context of music, the longings, resentments, frustrations, and despair that the Arab dares not speak.

In this context the words of “Aïcha” ring powerfully true.

I want the same rights as you
And respect for each day.
I don’t want anything but love. (translated from the French lyrics)

A luminous ideal in a dark world, and a reminder that it’s not oppression that creates beautiful musicrather the instinct to affirm our humanity in spite of it.