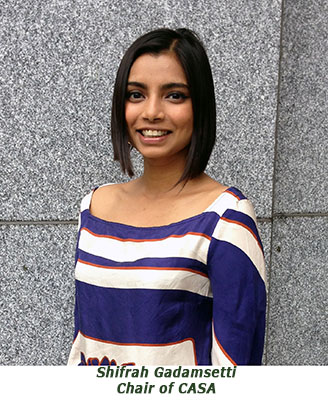 Shifrah Gadamsetti is the Chair of the board of the Canadian Alliance of Student Associations and is also the President of the Mount Royal University Students Association. She is currently pursuing her second undergraduate degree, but took a few minutes to answer some questions about CASA and her role in it for The Voice Magazine.

How did you get involved in CASA and what is your background?
I started by getting involved with my students association back home; thats the Students Association of Mount Royal University. I was governor. I have sat on a student board for two years prior to my tenure as president and this is now my second term coming back. And I had seen my predecessor be involved with CASA prior to me being elected; he was elected CASA chair and we were given updates at our council meetings.

I was curious about the work that he was doing and then last year, as a first-time delegate, I had an incredibly rewarding experience working with CASA on the National Advocacy team, and so this year I decided to pursue the position of chair. Its awesome! I think CASA is one of those silent giants that does good work. I think part of our role this year is to make sure that students can be more aware of the work that we do and support us better, and to create more exposure with external stakeholders and government. CASA essentially operates on four principles: quality, innovation, affordability, and accessibility. I think the way that they approach things is evidence-based, intentional, and respectful. It creates a good dialogue with government to address barriers within post-secondary. Were mainly policy driven, so when we have an issue we go through the steps of researching and publishing a paper and then creating a policy to back up that stance. Our hope is that the people that we interact with utilize that policy to make effective change for the students.

So what tasks and responsibilities come with your position?
Its everything, I think. As chair, I don’t personally have a committee, but the board would essentially be my committee. So, theres oversight in terms of the work of the board and the membership. A huge portion, and it’s something that I’ve highlighted as a priority this year, is the membership itself and making sure that our members are happy, satisfied, and valuing the work that were doing for themthat the effort that theyre putting into the work thats being produced is celebrated and supported well, because youre not going to have an effective organization if people were working with arent happy with the work that were doing. Other things include planning for conferences with home staff. I’m the face of CASA for the year, essentially, so I’ve participated in external consultations, and I’ve presented to committees before, reviewing policies, reviewing strategic plans, and making sure that we, as a Board, are enacting the strategic plan. Yes, it’s everything, if theres something out there that CASA does; I probably have a hand in it.

So that people know; how many hours are expected? How many do you actually work? And is this paid or volunteered?
This is a completely voluntary role. People are able to access the role and its responsibilities by being sent as a delegate from their member institutions. I think the expected hourly requirement per week might be around 15 to 20 hours. Some weeks are slower. They can be 10 hours. I very much believe, with this position, or even being an executive with the Students Association or Union, the job is what you make it, right? So, I don’t think people do it for the money. I don’t think people go into it thinking that it’s going to be a 9 to 5. CASA has been a huge time commitment. There are some weeks where I spent 40 hours going over materials and making sure I was incredibly engaged and doing as much as I’m possibly capable of. I’m sure that there are going to be months where I’m going to need to slow down because I do have other responsibilities. Its been rewarding overall.

One question for students who don’t know about CASA; why is CASA important?
CASA is student voices across Canada to the federal government, and all of the hands they play in post-secondary education. As a society, we have recognized that education is the key, is one of the main factors thats applicable across the country, to be successful and to have a stable future, to think about living comfortably. And so when we have so many students pursuing post-secondary education, we want to make sure that theyre supported through that journey. Thats why CASA exists, to make sure that the government is being responsive to their needs.

What can average students do to become involved CASA?
We are always open to consultation. Were very much member driven. If youre enrolled at an institution thats a part of our membership or even if you arent, our door is always open, figuratively speaking. You can send us an email if you have questions. Or if you want to use some of our materials to better inform the things that youre doing; thats something that you can do. We do surveys. We do polling, and we do consultation; so youre welcome to participate in that as a student at large. Youre also welcome to participate with your executives at your home institution. Our executives sometimes have outreach teams – thats a way to participate, if you so wish. There are many different ways. Were open!

What have been the priority themes brought up by student executives, and what direction do you think CASA will be taking in the 2017-2018 year?
So we’ve picked five priorities this year, but Ill talk about the top two. Across the board, members had identified health and wellness as an area of development and that should be better supported. Second, we identified Indigenous students as another top priority. At this moment, we don’t have an Indigenous student on our board. We rarely have Indigenous students represented within the delegation as well. So, our approach this year is going to be coming up with a few guiding principles to talk about how we consult and we engage with Indigenous communities; our director of policy clearly articulated something thats important: that Indigenous communities arent a monolith, that they cant all be represented by one person. And so if we are going to do a good job of this, we need to first come up with some principles, come up with a mechanism of consultation, make sure that the consultation is broad, and then make sure that we are not speaking on behalf of other people. I think thats our priority this year: We want to indigenize CASA in a way thats respectful and aware that we are not the conduit that should be making these decisions. The other one, health and wellness, is also an interesting theme, because it affects all students unanimously, across the board as well, but theres few mechanisms to address these issues at a federal level. Interestingly enough, the federal government does provide our provinces with funding specifically for post-secondary through the federal health transfers. We want to make sure that theres awareness of where that money is going provincially, as well as find other creative ways the federal government can support students, even if it’s not necessarily through funding. It might be better legislation. It might be better access, especially for communities that are rural or incredibly small. They don’t have the same resources that urban centers do. In urban centers, certain institutions have different types of challenges, right? So, it is making sure that were accounting for that, and then also I think this year were prioritizing coming up with that creative solutions to make sure that mental health is addressed and physical health and wellbeing is addressed. Thats a conversation that doesnt happen often.

Whatll be the obstacles to achieving these?
Frankly, the number one obstacle at the federal level is that we don’t have a minister of post-secondary education. We have access to various departments that understand the realm in which were working in. So, one of the challenges is familiarizing the people that youre speaking to about your environment, in your context, and why your needs are niche versus more general. For example, we do have a Minister of Health, Minister Philpott has done some great work, but it’s hard to superimpose those types of things into post-secondary institutions because, oftentimes, theyre separate and a unique community within a community, and so their needs arent always served by broader policies. For us, it’s finding a way to take good work thats done and then integrating it into CASA.

Of the big asks from CASA to the federal government which have been big successes?
I love this! Personally, I’m so moved by the delegation and their commitment to our Indigenous communities. Last year, we asked the government to address the backfill of funding to the post-secondary student support program (which is the program that offers funding for Indigenous students to access post-secondary) and wed asked for a total of 320 million to cover the backfill over the next three years, and then also removed the 2% funding cap because Indigenous youth are the largest growing community within Canada and they are not supported by simply filling the backfill. So, there are people waiting to access security. We presented this in our pre-budget submission, and we talked about it at our Advocacy Week. It was one of the most talked-about asks, and the federal government responded, and dedicated 90 million, which is quite a significant amount! I mean, wed asked for 106 for that year and we got 90. I don’t think there are many organizations out there who can make such grand asks and then see them realized. I think thats a validation of how effective our work is.

Any final thoughts or feelings or thoughts in conclusion?
This has been an incredible experience. I encourage people to take what they can out of CASA, I’m not even speaking as a board member. I think the experiences, the knowledge sharing, the skills that I had developed over the last year as a delegate were so valuable to me and I’m going to use them for the rest of my life. So you have an opportunity; you take it.

From My Perspective – Graduate Students’ Association for AU Students