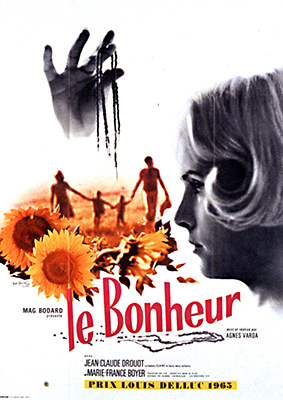 “Yes! Got it! This is a happy family! Can we move to the next scene, please?”

Viewing hundreds of fast-paced Hollywood films with machine gun editing does tend to spoil one for thoughtful films. Besides, some of the more arty films appear to pride themselves on being as dull and unfathomable as a tax return, and sometimes the ending arrives accompanied by a sense that youll never get that time back.

With Agnès Vardas Le Bonheur (Happiness), getting through the drawn-out sequences to the end of the film will reward you with some insight into the dark side of the traditional nuclear family, a social institution which, according to Varga and many other social critics, appears to depend for its survival on female roles without real people in them. Its no surprise that the film has been compared to The Stepford Wives.

The handsome François, his lovely wife Thérèse, and their two, cherubic offspring, Pierrot and Gisou, have an idyllic life. Whether picnicking in the countryside, pottering around the house, or paying visits, their days look sweet as honeysuckle. But shadows are about to fall.

While visiting Françoiss aunt and uncle, Thérèse smilingly offers the aunt a lovely bouquet shes taken pains to assemble from wildflowers in the forest. The aunt brushes them away, saying, “Keep them. I have enough flowers in my garden.”

Thérèses carefully crafted expression of kindness has been dismissed as if it meant nothing. A look of perplexed hurt dashes across her face, but she keeps her composure. She doesnt even whine to François about it afterwardsthat would make her not a nice person, and being a nice person is all she has.

This kind of female archetype still haunts women today. Its this ideal that makes us feel shame when we cant look perfect, maintain a successful career, keep a perfect house, raise perfect children, and keep our partners perfectly happy. The question the film asks is this: If you could do all that, where would it get you?

Thérèse isnt allowed to object, complain, or disagree. Shes not allowed to feel resentment, rage, despair, or any other of the normal range of human emotions. She must work hard, sacrifice herself, pocket insults, and accept neglect and indifference, all with a loving smile. She carries it off brilliantly, and her husband knows himself to be a very lucky man.

François so brims with happiness that when Émilie (a postal worker who oddly looks just like Thérèse but with more makeup) takes an interest in him hes ready to spread the happiness around.

On their next bucolic family outing Thérèse asks François why he seems so buoyant lately. Reluctantly he tells her about his affair, adding that it doesnt change his love for her. Thérèse is crushed but does all she can to hide her pain, sweetly remarking that shes glad to see him this happy. Hes so delighted with having gotten away with betraying her that he insists on making love to her before falling asleep in the grass.

When Thérèse fades out of Françoiss life forever he quickly replaces her with Émilie, and the family life carries on as blissfully as ever. The disappearance of their biological mother seems not even to have registered with the children as they take Émilies hands and wander through the sunny meadow.

Before marrying François, Émilie had been her own person. Shed supported herself, had her own place, read books, and listened to music. Now she must leave all that behind her. When François tells her that he loves his children and hopes she can love them too, she hesitates, saying, “I don’t want to replace anyone.”

When she steps into Thérèses role she leaves her true self behind, just as Thérèse had done before her. Neither Thérèse nor Émilie are allowed to exist as persons in their own right. Each woman is required to become a kind of empty shell, consisting of no more than the role she plays within the family.

Incidentally, I discovered this little cinematographic epiphany via Mubi, where, for a monthly pittance you can enjoy a varying selection of intelligent films new and old. Its truly a fabulous resource for film students and buffs alike, and I’m so glad I found it. (For the record, I’m not receiving any compensation from Mubi for saying this, nor will I ever.)

Happiness manifests five of the Mindful Bards criteria for films well worth seeing.

 Its authentic, original, and delightful.
 It poses and admirably responds to questions that have a direct bearing on my view of existence.
 It displays an engagement with and compassionate response to suffering.
 It makes me want to be a better artist.
 It makes me appreciate that life is a complex and rare phenomena, making living a unique opportunity.