All councillors except for Amanda Lipinski, who passed along her regrets, were in attendance at the September 12th AUSU council meeting. The meeting started with the first reading of AUSUs new bylaws. The bylaw draft, which council has been working on for the past year, includes several significant changes:
 Increasing the number of councillors from 9 to 13;
 Removing membership fee specifics, which will instead be placed in a membership fee policy and changed only by special resolution;
 Removing points that guarantee editorial autonomy for the Voice Magazine and its funding percentage, with the Voices budget to be determined annually by council;
 Adding the roles and responsibilities of AUSUs executive director;
 Adding a section that outlines AUSUs signing authority;
 Including a process for strategic planning; and
 Replacing the annual general meeting with a similar annual members meeting, only without teeth.

Overall, the new bylaws are well-organized, comprehensive, and general, with policy delineating more specific aspects such as the membership fee. AUSU bylaw revisions require two official readings during public council meetings and two student consultations by teleconference. President Shawna Wasylyshyn mentioned that, thus far, no students have participated in the bylaw forum on AUSUs Web site and only one student attended the consultation on September 6. No councillors had any questions or comments about the bylaws, even after Shawnas prodding, and the first reading was approved unanimously.

Next, council approved the appointment of Councillors Kim Newsome, Robin Bleich, and Brandon Simmons to AUSUs Executive Compensation Review Committee. This biennial committee convenes the autumn before a general election to review and make recommendations to council on executive compensation. The committee is expected to produce its final report before the end of 2017.

The next item on the agenda was AUSUs three-year strategic plan, which was approved unanimously. The use of a long-term strategic plan as opposed to an annual goals list, as had been prior practice, provides continuity for council and stability for staff. The 2018-2020 strategic plan and its accompanying operational plan will provide guidance to council and staff on AUSUs strategic direction and key action items in the areas of advocacy, student engagement, member services, community partnerships, and AUSU organizational structure.

Councillor Kim Newsome expressed initial concern about the strategic document not being circulated to council for feedback prior to the meeting, but she also said that she was very pleased with the document. She raised some good points about how AUSU should not only measure the success of student services, but analyze that data so that it can be used to better engage and communicate with students about services. Kim also pointed out that the goal to advocate for “teaching excellence” is not applicable for AUSU, but that advocacy should be directed more toward the content, variety, and updating of AU courses. To address her concern, the wording was changed to advocating for “academic excellence.”

In two staff-related agenda items, council voted to continue Jodi Campbells employment as AUSUs Executive Director, now that his probation period is over, and agreed to allow him to hire a full-time governance and advocacy coordinator. The job description for the new position details how this new staff member will have responsibility for “overseeing all aspects of the AUSU governance and advocacy initiatives and strategies in order to enhance the overall experience of undergraduate students at AU.”

Changes to AUSUs Staff Management Policy (5.03) prompted an interesting discussion about who should be involved in staff performance reviews. Kim Newsome pointed out that council changed this policy in January 2017 to require three to six people to participate in each performance review, a point that was now being removed. ED Jodi Campbell said that he is “not a fan of performance reviews,” but prefers to conduct an annual review that centers on building positive relationships and setting goals. Kim responded that she would like multiple sources of feedback to be included so that one person does not control the review process. However, Councillors Brandon Simmons, Andrew Gray, and Robin Bleich spoke up that council should not be involved in staff reviews, but that good governance practices allow the ED to manage his staff how he sees fit; the ED is then held accountable to council for his management of staff. After adding a point that the EDs review will be done by the AUSU Executive, these changes were approved.

The monthly reports from the AUSU Executive, staff, and committee chairs revealed a somewhat quiet month at AUSU. However, one point of interest from the executive directors report was that AUSU has recently partnered with Shaw on a trial basis to provide discounts to AUSU members. There was a brief discussion about whether this offer qualifies as a student service and whether council should have been involved in the decision to sign an agreement with Shaw. An action item was created to look into creating a procedure for future offers.

The next council meeting is scheduled for Thursday, October 12th at 5:30 pm MST. This meeting will contain the final reading of the new AUSU bylaws, so if you would like to provide feedback to council before the bylaws final approval, just send them an e-mail or comment on AUSUs bylaw forum.

Bonita is a 3rd year bachelor of commerce student at AU, a mom-of-three, a political junkie, and an impassioned tennis fan, who just so happens to enjoy attending AUSU council meetings in her “spare” time. You can follow her on twitter @BonitaRenee88. 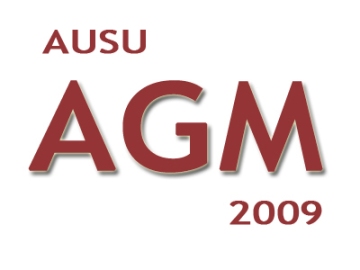