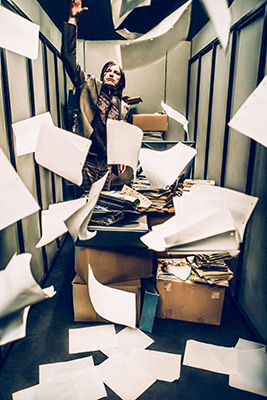 Many of us at AU are, or were, beginners in our fields of study. Whether your dream is to be a freelance writer, a registered nurse, an anthropology professor, or a marketing managerwe start somewhere. And sometimes we get taken advantage of by people in higher positions.

To prove my skills, the editor of a small newspaper in my hometown had wanted me to write an article. From there she would decide if she would want to hire me, and would let me know if she was going to publish the article or not. She also made it clear that she would pay me for the article. I then waited to receive the assignment, and when I did I set to work.

I put a lot of effort into that article, and I was quite certain I would get the job. I sent it to her and added that I looked forward to hearing her thoughts. Then I waited. A week went by and I still hadnt heard from this editor. Somehow, I came across the previous weeks publication and realized that she had went ahead and published my article, without letting me know. I was ecstatic but thought she must be busy; thats why she hadnt got back to me. So I sent her a polite email.

I waited another week, and sent out another polite email. Followed by several other polite emails in the following weeks. A whole month went by and still not a word from this editor. I had had enough. I decided to get a bit aggressive, and sent out a less polite email. That got her attention. She replied, asked for an invoice, and said that she had gone ahead and hired someone else. I typed up an invoice and sent it out. And that was the end of that, for her.

But I felt used. In my mind, I had created an article that I had stressed over, that in the end was just thrown into a publication as a filler. I was angry.

It is possible to take a negative experience and turn it into a positive one. These positive experiences arise in the form of lessons. Here are a few things to think about when pursuing your goals:
 Identifying Red Flags
This one was huge for me. I encountered red flags from the beginning and I ignored them. The first was that the editor kept rescheduling the interview and had said “Ill email you when it will be a good time for me.” She rescheduled on me more than once, or didn’t email me back when she said she would.

 Do your homework
When providing a service for someone, especially on a freelance basis, make sure a contract of some sort is written up. I had never been paid before for a freelance article, and I didn’t even think of sending an invoice. Make sure beforehand that you have everything in place so that you get paid. Be prepared.

 Know your worth, protect your talent, and be assertive.
Your talent, knowledge, and passion are important, and it should not be compromised. If you provide a service, you deserve to be paid. It isnt normal to have to chase someone down for payment. That is stealing. I was nervous to send that assertive email. I was nervous to upset an industry professional, but I realized that if I didn’t I would have had my work stolen from me. If I hadnt said something, I believe that she wouldnt have paid me. I sat there thinking that since I was new, that it was normal to be treated that way. But it wasnt.

A person in a higher position than you, is just that, a person. People develop biased opinions, become jealous, and manipulate. Just because someone has more experience than you doesnt mean theyre exempt from being a courteous human being. A good leader is one that educates. In the end, it is worth it to fight back, to challenge, and to be a little pushy. You deserve to be treated fairly.

Karlee Kapler is a student at AU, majoring in English. She hopes one day to pursue a career in either editing, publishing, writing, communications, or post secondary teaching. She cant decide! Feel like reaching out? Shoot her an email at karlee.kapler@gmail.com

Karlee Kapler is a student at AU, majoring in English. She hopes one day to pursue a career in either editing, publishing, writing, communications, or post secondary teaching. She can’t decide! Feel like reaching out? Shoot her an email at karlee.kapler@gmail.com