Articles
The Voice
Enjoying the Fruit of my Labour 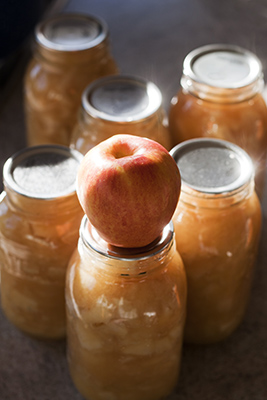 Thanks to a bumper year for fruit, I was given lots of free crab-apples from neighbours who couldn’t use their entire bounty. My frugal instinct wouldn’t bear to see them go to waste. So, even though I knew taking them would mean a bunch of work for me to do something with them, I accepted the gift.

Crab-apples are nature’s “meh” fruit. People plant the trees in their yards, and then seem to have no idea what to do with what the trees produce. The small and fiddly crab-apples aren’t really fit for a purpose, except as offensive weapons for kids to throw at each other. But these ones from my neighbours’ tree were large, plump, ruby-red, and pleasantly tart. They’d be useful.

My deep freeze didn’t have enough room to hold bags of frozen apples, so my only choice was to can them. The trouble was, I’ve never canned anything on my own in my life! Canning is one of the most “science-y” processes of cooking. It seems like a relatively simple thing to do; To enable the food to be kept for a long time, you place food in sterilized jars, place lids on the jars, and then create a vacuum seal on the jars by boiling them to eliminate the microbes that spoil food. But it can be tricky to get right. The method is precise and there are no shortcuts. At the end of it, either the jars seal, or they don’t. Either food is protected from pathogens, or it isn’t.

Home canning seems to be obsolete, and it isn’t something that is taught in schools anymore. After all, if you want a jar of jam or a can of vegetables, just go to grocery store and choose what you need at a pretty small cost. Home canning, on the other hand, requires the investment of the necessary equipment as well as the ingredients. It also takes the investment of timesomething that is a premium commodity these days.

So why did I feel the urge go to all the expense and effort? I guess I wanted to prove to myself that I could do it, that, as a cook, I had the skill. But it went beyond that. I wanted to feel a connection to where my food comes from and an appreciation of what goes into making food, beyond a supermarket transaction. But more importantly, I felt a yearning feel a connection to a tradition that lay deep within the branches of my family tree.

Both my grandmothers canned their homegrown produce to feed their large families, and no doubt their mothers and grandmothers did the same. Row on row of jars would be lined up on their pantry and cellar shelves out of necessity: modern supermarkets didn’t exist, and purchasing large amounts of food was an extravagance they couldn’t afford. My mom didn’t need to feed a large family, but my parents kept a large garden and my childhood chores involved watering and weeding. I was also required to help my mom preserve the bounty, and that mostly meant putting it into jars. But this was a tedious chore that I hated. All the blanching and peeling and choppingthe tomatoes and peaches were the worst, turning my arms sticky from their juice. The steam from the canning kettle would turn the kitchen, already stifling from the summer heat, into a sauna. My back and feet ached, and I would count down the time until I could escape and join my friends outside. I protested at the indignity, wondering why we were going to such trouble when we could just go to the store. I swore that I would never, ever do all this work to make jam and put fruit into jars. But I admit that it was worth it in the middle of winter, when prying the lid off a mason jar of fragrant peaches was like releasing a bit of summer. Store-bought fruit just didn’t compare.

So now, out of necessity in dealing with the windfall I was given, as well as wanting to recapture a bit of nostalgia, I found myself compelled to learn the domestic science skill of canning. My mom passed away two years ago and is no longer here to give me her advice and knowledge of food preservation. But it turns out that this skill, even in our modern era of convenience, is far from dead. The abundance of web pages and food blogs provided the resources and recipes I needed. Canning might not be the done thing nowadays, but the art of preserving is still alive and welland might even be a little bit trendy among foodies. So I purchased a canning kettle, jars, and other necessary tools (they weren’t as expensive as I thought) and decided to turn my free fruit into jars of spicy chutney and apple butter.

My twelve-year old son was curious about all of this and wanted to help, so I got him to practice his knife skills and gave him the task of quartering the crab-apples, which he then passed to me to de-seed. Thank goodness I didn’t need to peel them toothat would’ve taken forever. We put on some upbeat music and chatted while we worked. He said that he was having fun, even though it took a lot of fruit to get enough for the recipes. I measured the sugar and spices and simmered the mixture on the stove while he watched. The cinnamon and cloves mixed with the tangy apple and gave the house a divine smell. It made it easy for me to ignore the splatters on the stove, and the wall, and the scraps of fruit on the floor. I washed the jars and got the large canning kettle boiling on the stove. I meticulously read the directions and filled the hot jars with the hot fruit. I wiped the rims, secured the lidsand prayed that I was doing this right.

I timed the boiling time exactly, and when I carefully removed the jars onto the towel-covered counter, I felt physical butterflies in my stomach. I prayed again that I’d hear the lids popthe sure sign that they were sealed and the process worked. I was overjoyed when one after another, I heard the soft pings. I actually did it! This most science-y of kitchen knowhow was actually a bit magical!

I wish that my mom were around to seeand approveof my efforts. I kept staring at the dozen jars of apple rich brown apple butter and the ten jars of speckled brown chutney as they cooled, not quite believing that I had made something that was so much work but also so satisfying. I kept pressing on the lids, not believing that they really were sealed and ready to be carefully stored on shelves. The kitchen was in a horrible state and it would take me a while to clean it. But that didn’t matter; I felt like I’d earned my merit badge as a domestic goddess. I planned what I could possibly make next; perhaps some homemade jam or lemon curd to give away to appreciative friends. Or maybe a batch of peaches or tomatoes would arrive via a farmer’s market or produce discounter, and I could take advantage of the cheap prices and can them so they could become a delicacy to be savoured in the middle of winter in the same way I enjoyed them when I was young. My small family doesn’t require my house to have a huge cellar filled with rows of jars, but at least I know that I am able do something to help provide for my family in a tangible way. And for that, I feel thankful. Seems about right for Thanksgiving.

Why We Should Befriend Nature

The Struggling Student Rants—Make the Most of Your Yard & Garden