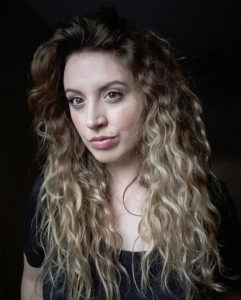 Recently featured writer for the Voice magazine, Karlee Kapler is a fairly new student at AU working towards her BA with a major in English.  She describes herself as analytical, irritable, and creative, and not really an outdoorsy person.  One of the surprising few who are born and raised in Grande Prairie, she not only thinks that the bustling city surrounded by deep woods and vast prairies filled with people from all over is worth the stopover on your way to Jasper, but you should stay for the sushi served at Soto Teppanyaki and Fusion Sushi.

What has your academic journey looked like so far?
I had previously completed two years of my English degree at the local college in Grande Prairie.  I transferred to AU as the Grande Prairie Regional College didn’t have the senior level courses in English that I needed.  When I transferred to AU, I also started a new job around the same time.  I had a bit of a difficult time adjusting to both a new job and working on school part-time through AU.  I took me a little while to figure out how to balance everything, but I have finally figured it out –I think.

To be honest, I have only actually completed one course through Athabasca in the last year.  I had enrolled in one other class, which turned out not to be for me and I didn’t complete it.  It has only been in the last 6 or 7 months I buckled down and started working harder on my studies.

In general, the best class I have ever taken in my academic career was one that I took at the GPRC and it was an English class that focused on American literature from the early 20th century.

Which course would you recommend to other English students?
I think that any English course that focuses on developing your essay writing skills is crucial for any student, but in particular an English student would find it most beneficial, as well as a great foundation for their senior level courses.  The GPRC didn’t make it mandatory to take a class in essay writing, there was one available in the junior English class selection, but it wasn’t mandatory, and I pursued other junior English classes instead.  Now that I have transferred to AU, I have to take ENG 255.  Even though I am well past junior English classes, it is a requirement! Which I think is a great thing, and I wish I would have taken it sooner! I struggled so much in the beginning with writing essays, and still sometimes do.

I know, what sense does that make? An English major who struggles at writing essays!

How do you motivate yourself when it comes to studying?
I wish I had something romantic and inspiring to say, but I don’t.  The three things that motivate me to study more are:

The latter is one that really gets me though! Seeing a potential job I would have really loved to apply for come up and then slip away makes me want to complete my degree quicker!

What is your favorite book?
The Great Gatsby by F.  Scott Fitzgerald

Yes, how surprising an English major that adores The Great Gatsby.  Don’t roll your eyes!

It is elegantly written and each sentence is perfectly crafted.  It also has some of the most beautiful lines I have ever read.  It begins and ends with sentences that I resonate with so much.  When you feel a surge of emphasis from the first AND the last line of a book, you know what you are reading is something special.

“In my younger and more vulnerable years my father gave me some advice that I’ve been turning over in my mind ever since.

“Whenever you feel like criticizing any one,” he told me, “just remember that all the people in this world haven’t had the advantages that you’ve had.”

“So we beat on, boats against the current, borne back ceaselessly into the past.”

Have you watched The Great Gatsby film?
Yes, there are two and I have seen both.  Actually, wait, aren’t there three versions? One dating back from the 1920s or 1930s?

Anyway, I have only seen the one produced in the 1970s, as well as the one produced in 2013.  Both are so different in the way they were filmed and created.  The one created in the 1970s is so delicate, while the one produced in 2013 is so vivid.  I had seen the more recent one before I had seen the older version, and the way I had imagined everything while reading the book coincided with the newer version.  The older version, I guess you could say, made me feel sleepy.  And I don’t mean that as it was so boring I fell asleep.  I mean the colour usage, the way they spoke, the way they interacted just seemed so subtle.  The newer version was jarring and loud and vibrant, and that’s exactly how I pictured it while reading.  I do really enjoy the newer version, and I found it followed the book so well, the script almost exact to the book.  That doesn’t usually happen when a book is turned into a movie.

If your life was a novel, what would the title be?
The Holiday Armadillo: Being the Ross Geller in Everyday Life

In your article, I loved your statement “A good leader is one that educates.” Tell me about a positive leader in your life and how he or she inspired you.
I had an English instructor at the GPRC that I aspire to be like every day.  She has lived the most fascinating life, but is also so down-to-earth.  She is very friendly and helpful to all of her students, and she is so knowledgeable and passionate about what she taught.  She always took the time to really help me when I struggled with certain aspects of MLA essays, or to listen when I would approach her and start chatting after class about something when she probably had to leave.  I guess you could say she always took the time.  And it was with all of her students.  She was an extremely hard marker though, but I appreciated it.

You are hosting a dinner party and have been lucky enough to invite 8 people that have influenced your life (celebrity or not, alive or dead).  Who are the 8 people sitting at your table?
My husband, my sister, the English instructor mentioned previously, F.  Scott Fitzgerald, Laura Ingalls Wilder, Meryl Streep, Emma Watson, and Claude Monet.

If you could bring back one toy from your childhood, what would it be?
I don’t know to be honest.  The few things I loved as a child I still have.  I don’t have any yearning for anything in particular from my childhood.  I kept my Little House on the Prairie box set from when I was a child and it will always have an honorary position on my bookshelf.  Some of the books that were my favourite out of that set are extremely worn.  I guess if I didn’t have those, they would be something I would want to bring back.

Laura Nelson is a marketing analyst by day and a bibliophile by night. She is in her final stages of completing her BA with a major in English through AU