Last week, I landed in the sun-kissed 22 degrees clime of Las Vegas.  Among other things that are jaw-dropping in the entertainment capital of the world, the buffet was a mouth-watering highlight of my trip.  As AU students looking for a budget vacation, Vegas can provide an affordable vacation while offering an unforgettable dining experience.  Particularly for foodies, Vegas is a one stop shop for buffets that are sure to suit your palates.  After scouting out the most popular buffets on the Las Vegas strip, I decided upon two infamous buffets that have brought food bloggers to the city from all over the world.  Both buffets were ranked among the top buffets in the city, with each featuring its uniquely curated international fares.

The Buffet at Aria 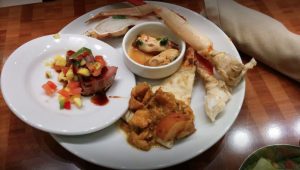 Overall Impression: The Buffet is ultimately one of my all time favorite places to overindulge, The Buffet at Aria has never ceased to impress me with its wide selection of entrees, outstanding seafood, and an arrangement of made to order items that enrich the dining experience.  Some new additions to the buffet since 2016 include a delectable, made-to-order omelette station, a custom seafood grill station, and a naan station that mimics a Michelin-star restaurant and makes you forget you’re inside a grand buffet. 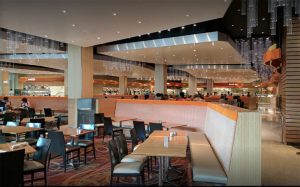 Ambience: The open, well-lit space of the buffet is a prime location for snapping impressive foodie photos.  The clean, modern design gives an open cafeteria feel to the buffet without being extravagant.  The place is inviting and faces the hotel pool which buffet goers can soak in after gorging their meal. 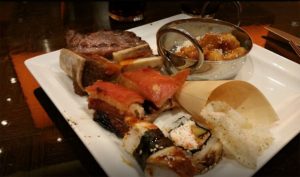 Overall Impression: Having read multiple food bloggers raving about the quality of this buffet, I was keen to experience first-hand the dining milieu at the Cosmopolitan.  At first glance, the buffet offers some unique dishes that I haven’t seen elsewhere.  Wicked Frog Legs and Kimchi Bone Marrow stood out to me the most on my first pass through the dining area. 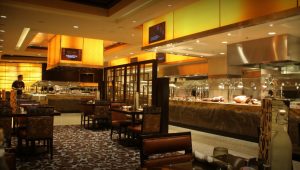 Ambience: The theme of the Cosmopolitan revolves around the modern, sophisticated feel of large metropolitans in North America.  Similarly, its buffet is elegantly furnished and intricately designed.  Unlike The Buffet at Aria, Wicked Spoon creates a warmer, cozier feel, suitable for a romantic night out.

Final thoughts on vegas buffets:
Overall the experience of fine dining in Las Vegas is incomparable to anywhere else in the world.  Having stayed at similar casino-resorts in Macau, China, the dining overseas simply isn’t the same.  Given the time constraint of my current trip, I wasn’t able to try some other top-notch buffets. But other notable buffets for consideration on your future travels to the area should include Bacchanal Buffet at Caesar’s Palace and Bally’s Sterling Brunch at Bally’s Las Vegas

Have you had a dining experience Las Vegas? What was your favorite? Throw us a comment below.