Columns
The Voice
The Fit Student—Butt Out!

I smoked during grades six and seven.  Luckily, basketball, volleyball, soccer—sports of all sorts—saved my lungs.  Sadly, I restarted puffing in grade ten.   I’d carry two packs a day, one for myself, the other for the gang of black lungs I called pals.  My throat wheezed nonstop, whistling louder than Fred Astaire, and my nose dripped daily.

Unlike me, my little sister smoked like Marlon Brando.  She could blow smoke rings back in grade three.  When Mom found out, she stuffed a menthol smoke in my sister’s mouth, and then lit the nightmare.  To Mom’s horror, my sister inhaled.  Mom grounded my sister most of the year—most every year.

My first attempt to quit smoking, at age twenty-five, failed.  Why?  Whenever I’d nap, my soul would slip away, not into lullaby land, but into an abyss.  I’d awaken, unable to move—unable to open my eyes—until I’d start screaming.  After sixteen days of terror, I marathon-puffed a pack of Player’s Light.   Defeated, I chose life, not health.

That same year, I quit again, this time with Nicorette gum.  For the first week, I’d chew a gum every hour, twelve gums per day.  Each week thereafter, I’d reduce my gum intake by one.  But I still suffered, sweating—screaming—in my bed, shivering at the sight of each moon.  After twelve weeks, I beat the smoldering demon—for good.

A reason to quit, ladies?  No smoking makes you pretty.  Years ago, a beautiful young blonde I knew butted her last cig.  After several months, her skin glowed, her face flushed pink—and her blonde hair shimmered.  But she had a taste for wild men.  So, she dated a smoker and returned to puffing poison.  Slowly, her skin paled, her hair frizzed, her lips withered into zigzags.  Gross! Smoking draws out our inner hag.

Before New Year’s Eve, join a gym, get a makeover—and butt out, cold turkey!   Three weeks of pangs will be followed by freedom.  But don’t, like me, scream for months in the moonlight with nicotine gum. 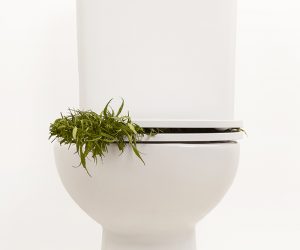 I Quit Smoking Weed—Here’s What Happened