Features
The Voice
Minds We Meet—Escaping with AU 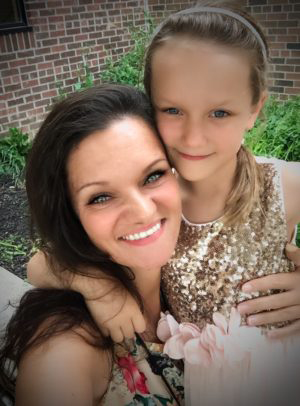 Robin with her daughter

Robin Bleich has been with AU since 2009.  She is a mother of a six-year-old, Eily, and is from the Niagara Region, Ontario.  Her education here is a continuation of her time at Niagara College, Ontario.  In 2009, she transferred the diploma to AU to join our BPA-Criminal Justice Program.  She finds that AU works well with her lifestyle, as you’ll find out.  She is also an AUSU Councillor.  Her long-term educational goal is earn a graduate degree in organizational reform.

You are a parent as well as a student.  Does the flexibility tap into a need there for you?

Yes, absolutely.  It’s very important.  I was going to AU before Eily was born.  She’s now six.  The flexibility is nice because I can book one-half or a whole day off work to go write my exam while she’s in school.  Or I can be off on maternity leave for a year, which gives you the opportunity to raise a child and be committed to your schoolwork.  This is just something the traditional brick-and-mortar institution would not have accommodated as a full-time mom and full-time employee.

How did you become interested in being a police officer in the Niagra region?

I was raised by my father, in addition to my two siblings, Zayna and Rebecca.  We grew up in housing complexes owned by the province; they’re designed to assist low-income families with some fiduciary responsibilities.  These town-homes were filled with criminal activities; like bullying, break and enters, assaults, and mischief.  That was just the nature of where we lived.  Moreover, clothing and food were a struggle for us.  We learned very quickly who community outreach resources were, and took advantage of the help.  These outreach centers provided us with clothing and food.

I often say to people who raised me, “Thank you,” because it does take a whole community to do it, especially when your family struggles and you need a lending hand.  I guess getting into policing was my way of giving back, because without them I wouldn’t have been able to develop into the individual I am.  So, it’s like a 360 in community contributions; they contributed to my lifestyle and now to my efforts, and I’m contributing back.

You earned the Future Alumni Award of Athabasca University.  How did you qualify?

It’s an award that looks at your contributions professionally, personally, and to the university.  So, quite easily, the contributions to the university were the main qualifier.  You can attribute that to being elected as councilor with the Athabasca University Students’ Union, in October of 2016.  Along with the other councilors, I advocate for the undergraduate membership, placing their needs before my own.  I’m currently the Chairperson of the Awards Committee, Chairperson of the Executive Compensation and Review Committee, and a director on the Finance Committee.   I also participate in many Athabasca University projects as well, like some unique award opportunities, the redesign of web parts for accessibility for our members.

I also just signed an Agreement to sponsor a new award I created with AU, called the Sunny Bleich Award, that will be available October 2019, for the next five (5) years; honouring my nephew and late sibling, Bobbi-Jo Bleich.

Another component of the award AU examines is personal growth, GPA, and academic achievements overall.  That’s obviously based on what your overall GPA is, but personal growth and community contribution?  I’ve done that my entire life.  I’ve been volunteering since I was 11 or 12.  Some things for many years, whether it’s at the local food banks or shelters that clothed or fed me.  I volunteer at soup kitchens in the wintertime and for the Special Olympics.  In terms of serving the community abroad, I represent on regional committees and I was recently appointed to Chair of the Crime Prevention Committee with The International Association of Chiefs of Police.  So, it’s a broad spectrum.  There’s many things that I do even through the work.  I am in the service of developing and implementing programming for our schools and focusing on the emergency management designs and strengthening collective efficacy social cohesion, and inter-agency collaboration through this program, as well as assisting other locations build this program in different countries.

So what did you have to do, and what has it meant?

The only thing I had to do was provide an interview, but what was interesting about that interview is that it kind of led to some other stuff that they were working on.  Some grief talks and they wanted to know how AU has worked for me, what I like most about Athabasca.  The flexibility is one thing, but, just to go off topic for a second, I remember telling you it was about being able to escape reality—pushing you toward that goal or dream.  AU has definitely achieved that, because their courses and programs on English and organizational behavior helped me to develop a better understanding on how my organization is designed: how it works, what to expect, how to communicate, and learn to get where I need to go using these platforms.

When my sister passed away suddenly and very unexpectedly, it was one of those things that you need to escape from, and then I was getting a divorce at the exact same time.  It was the week before I left my home during the divorce period, I found out my sister, Bobbi-Jo, had passed away.  But I was still going to school.

When I bought my new house, I fell through the bathroom floor.  The house was falling apart.  But I was still in school.

When I thought about doing my school work, it pulled me away from those moments and allowed me to be me, allowed me to build on me and remind me that I need to keep moving forward. So AU grounded me.  I couldn’t let my program stop.  It was a challenging time, but I’ve been able to keep working on my schooling.  That kept me grounded.  Education reminds you every time you open a book, every time you take an exam, every time you’re looking for that next course, that you’re a step closer to your dream.  AU, during a very turbulent time in my life, was my constant—it was my rock.  AU is an amazing University with amazing personalities.  There are some incredible people employed with AU, and I’m blessed to have crossed paths with them.