Articles
The Voice
I’ve Decided to Plant Explosives In Quebec

This spring I’m going to be planting a small bundle of explosives near my home in Montreal, Quebec. I’ll be burying them in the soil at Dante Park, where I often go to sit on a bench, drink a thermos of tea, and talk to my good buddy, the bust of Dante.

I’ve been a pacifist all my life. I’ve read just enough history to know that you can’t make peace with a bomb. But I feel like I have to do this, like the balance of the world is way out of whack and I have to make this gesture to prove to myself that at the very least, I’m not a part of the cruel chaos we’re drowning in.

I don’t claim this to be a rational decision. But the time for reason is past and now we must act, like the Weather Underground and like those theologians in Germany who tried to assassinate Hitler. We reach a point where we realise that all the dialogue and understanding in the world won’t stanch this deadly tide so we must as well add our own two cents worth. Like seeds in a pod, we’ll explode whether or not we choose to.

I guess what pushed me over the edge was seeing the photo of the children playing upstairs in the mosque in Quebec City just before the gunman, high on right wing propaganda, opened fire on their daddies, men prostrating themselves before their creator in prayer, bowing to the ground in a gesture of loving devotion to the God of Compassion and Mercy.

If this is where tolerance, patience, and open-mindedness get us, to hell with tolerance, patience, and open-mindedness. No more trying to see things from the haters? point of view. No more sympathizing with some overblown fiction about their marginalized status. They haven’t suffered any more than anyone else, and even if they had it wouldn’t entitle them to acts like this. they’re just a bunch of stupid whiney babies and I refuse to listen to another word from them until they grow up.

I’m going to make a hole about five feet to the left of the Dante statue. It doesn’t have to be very deep. I think it may be illegal to plant things like this in public parks but if it’s legal for the media to lie and for a hate-inciting criminal to rule a country then hey, anything goes, right? Consider this an act of civil disobedience against a decadent system of law and order.

Right now it’s too early to plant explosives because the ground is frozen, so I’m preparing my explosives indoors in tiny seed trays. I’m guessing that if I plant the seedlings in the park in April, Ramadan 2017 should see an explosion of violets there.

Violet seeds disperse by means of a sudden bursting of the seedpod; the seeds fly out, sometimes landing nearby, sometimes carried on the wind or on nearby sentient beings. The seeds spread out, find their place, and plant themselves, creating more violets, keeping weeds down, perfuming the air, and looking beautiful.

It’s not likely anyone will see this while it’s happening, but when they explode it will look something like this. 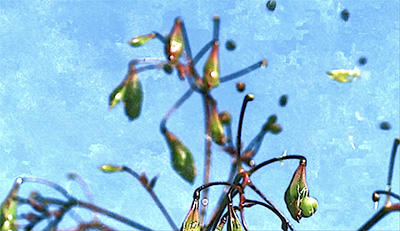 Australians already have Violet Day, during which they commemorate the soldiers who died in World War I. Let’s generalize that a little, shall we? Let’s plant violets to commemorate those beloved men who lost their lives in the terrorist attack in Quebec City. Plant them inside, outside, on your own property, and yes, of course, in public spaces.

Let’s create an explosion of violets across Canada. The time has come.

[This one is my choice. I remember this massacre along with the others, the attacks at Charlie Hebdo, and more recently, the attacks in Vegas and Texas and I come back to this article, which was first published on February 3rd, 2017 in issue 2505. So many of these events leave us feeling powerless. We’re on the other side of the country, or the world, and there’s little we can do except sink into despair, anger, or, worst of all, resignation. But here’s an answer. It’s not much, but to me, it stands as an affirmation of life in the face of these kinds of activities.  If we can still find the time, energy, and passion to plant flowers just for the beauty of them, there remains hope.  I couldn’t leave that out of what makes up The Best of the Voice. -Ed.]

The Travelling Student – The Pick Up