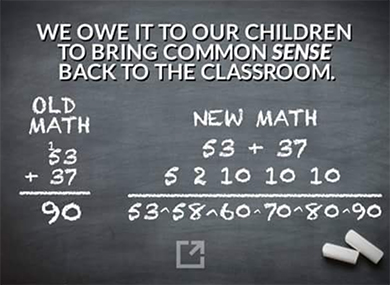 The new school year is in full swing and kids are delving into another year of “reading, writing, and ’rithmetic”. But the sense of optimism for a new school year is overshadowed by the growing voice of those who question the quality of children’s education. The K-12 curriculum and the teachers who deliver it are under increasing pressure to deliver student success amid squeezed education budgets and the increasing complexity of the modern classroom.

This is not inherently bad. Anyone who has an interest in education will agree that providing kids the best opportunity of success for all students will serve their futures well. But the overall climate of Canadian schools is that the curriculum is becoming a politicized battleground. Parents demand that teachers produce tangible evidence of improvement and success in student test scores. They are doing this not via one-on-one discussions at parent teacher conferences, but by public activism and advocacy played out in the media.

Then politicians enter the fray by declaring that the current system is broken and they promise the ultimate solution to fix it. Right now, school districts across Alberta are holding elections for school board trustees. In many of them, from rural areas to the largest boards located in Calgary and Edmonton, the state of education standards are being scrutinized like never before and are a main election issue. The main focus of this scrutiny is whether inquiry-based learning, also called discovery learning, is to blame for the current woes in education and should be abolished in favour of a traditional, back to basics, no-nonsense education model.

And what is school subject that is the focus of the most scrutiny? It’s math. Numeracy and having solid skills in mathematics, starting from the earliest elementary years, is becoming the benchmark for measuring whether kids are receiving a quality education.

But trying to make sense of the current curriculum debate is not easy, especially when it comes to backing up opinions with solid research. News headlines scream that kids are being failed by the “dumbed down” education system. And what about the kids who are left struggling with coming to grips with essential skills? Parents are left with either the choice to let kids flounder, or to fork out substantial sums on tutors or at privately run, franchised “learning centres” to boost their skills. So why does math matter so much–while literacy skills seem to be ignored–and why is the debate surrounding numeracy so heated? Is math really so important when looking at the whole picture of education, and do the numbers about math that reflect a poor education system really add up?

It is difficult to know what to believe because each side dredges up statistics to support their arguments. But this doesn’t answer the question as to why math in schools has become such a heated focus. The scrutiny may be because numbers are easily quantifiable. Literacy has building blocks such as vocabulary and phonics, but beyond that, much of literacy is relatively abstract and contains a lot of subjectivity. There can be many ways to interpret a work of literature, for example. On the other hand, math is, well, math. It involves indisputable facts where there is only one possible right answer and a predictable formula for reaching that answer. There aren’t really any philosophical discussions about math in childhood education like there are in literature. This is why math is easy to pick apart; either the answer is right, or it’s wrong. Simple as that. Plus, the general trend in education–and society as a whole–has been to emphasize the importance of STEM subjects. Math and Science-based subjects, the argument goes, will lead to careers that will get people ahead in our technologically-based world. The ability to write essays or philosophize about literature, presumably then, will not.

But math is a problematic subject. Ask your colleagues and friends whether they enjoyed math in school, and the responses are more likely to be that math is the subject they hated most, or that they just weren’t good at it—that they “just couldn’t do math”—rather than it being a subject they loved. The inclusion of inquiry-based learning has been blamed for declining standards, but it has entered the curriculum precisely to engage more students and get them to like math. Hence the increased use of “discovery” or “common core” math, which, critics say, has absolutely no place in education as there is nothing about math that lends itself to discovery and discussion, so the use of these methods only creates confusion and frustration in students who don’t have the capacity for philosophical reasoning. They see inquiry-based learning as a waste of taxpayer dollars and liken it to the disastrous equivalent “experiment” of whole-language curriculum during the 1980s and 90s that left many students with lasting difficulties in reading and writing.

Multitudes of news reports continue to scream out attention-grabbing headlines that call for a “Math Revolution” or point to a steady downward slope of test scores and sloppy pedagogy without offering solutions. The game of ping-pong played by education professionals and government officials leaves parents caught in the middle and they often don’t know who is telling the truth about what is going on. They also feel that when they do express their opinions, they get rebuffed. The result is that their only recourse is to turn to the media to pressure policy makers into fixing the curriculum, math in particular.

One high profile example is an Alberta-based campaign by Dr. Nhung Tran-Davjes, who was concerned enough about the poor math education her children were receiving to start a petition on change.org that has now gathered thousands of signatures. It calls for widespread reform to the math curriculum. Dr. Tran-Davies has been a visible spokesperson for the Back-to-Basics movement in the media, and has also met with elected officials to press for change. The campaign has also called for tightening standards in universities’ faculties of education for teachers in training.

But beyond these campaigns, what statistics are there to suggest that numeracy standards are in freefall in Canada? The biggest report that Canadian proponents of back-to-basics numeracy point to in their arguments is a study by the C.D. Howe Institute, “What To Do About Canada’s Declining Math Scores,” authored by University of Winnipeg professor Anna Stokke, and one that is widely quoted from. The case is laid out that the trend in all provinces is that math scores show a steady decline, which is particularly documented in provinces like Ontario and Alberta that use standardized testing to track student progress. The report calls for immediate and significant reform of the way numeracy skills are taught; otherwise, Canada will be at a huge disadvantage compared to other countries, particularly Asian nations. But other than the evidence presented in the Stokke report, the debate around math education seems to be largely anecdotal, citing students who are unable to perform simple sums in their heads, who don’t know the multiplication tables by heart, or who can’t figure out how to make change in a shop without the aid of an electronic device. Proponents of the “back to basics” movement look to the Asian system as the epitome of how an education system should operate, and urges the Western system to adopt their methodologies.

However, what is missing in the Great Math Debate is some balance. What isn’t talked about much is the other side, where educators are trying to engage students in developing an innate sense of numeracy that goes beyond rote memorization of facts and algorithms, or students who “get” math in a way they hadn’t previously because of the shift in teaching methods. Could poor teaching and a lack of understanding of the process behind the pedagogy—in other words, the traditional, fact-based curriculum that math reformers advocate—be to blame for people hating math, despite the importance and necessity of it in our world? And is the Asian education system really the “perfect” system that North America should be striving toward ?

What is also overlooked is that the practice of inquiry-based learning is often far different from the perception of it, especially where math is concerned. Math isn’t just about the ability to recite facts. It also involves hands on exploration, critical thinking, reasoning, and problem solving. Memorizing math facts doesn’t necessarily mean understanding, just as spelling bees don’t measure an ability to write eloquent essays.

Perhaps, despite all the rhetoric, this debate is just a starting point. Hopefully, in the coming decades, there will be an understanding of numeracy and math education that we have not had previously, based on the realization that people are wired to learn math in different ways, in the same way that people are wired with different learning styles in general. Perhaps this will lead to an approach to numeracy that will benefit all learners, not just those who are naturally inclined to be good at numbers.

But in the short term, what is guaranteed about math education is that the polarizing debate continues; in school parent council meetings, among school boards and governmentsnot to mention in the media and on social media. The attention-grabbing headlines will continue to give the illusion that the issues are cut and dry. But without the in-depth and balanced reporting about what is really happening in schools and the inclusion of verifiable, academic studies and balanced discussion, the positives about current math education will be displaced in favour of the negatives. And those at the heart of it all; the teachers, students, and parents, will be left to wonder whether the current education system is really failing.

Carla is a Calgary writer who showed an early talent for words, not numbers. To make up for the shortfall, she married a guy who was good at math. Say “hi” to her on Twitter @LunchBuster.

[This is a great example, from our October 10th eduction (issue 2540), of some of the investigative writing that The Voice Magazine receives that’s neither AU nor post-secondary related, but still can connect with a number of AU students.  Enough to make me take notice and put it in our Best of issue, at any rate! -Ed.]