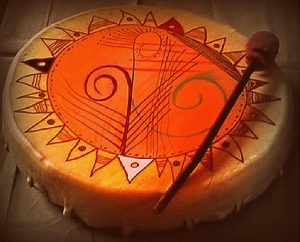 Early winter, 2001: The drum leaders are singing “The Grandmother Song,” a traditional Mi’kmaq [MIG-maw] summons to the ancestors of everyone in the room.  Looking around at the motley assortment of races gathered, I try to imagine our ancestors all showing up at once, and I can’t help but wonder how they’ll get along.

We’re seated on low stools around the drum—a massive hollowed oak tree trunk with a moose hide stretched across its surface.  We continue pounding until 11:30 pm, when Dusty stops us to say that if we continue to drum until midnight we’ll be obliged to drum all night long.  As rife with taboos as the whole drumming practice appears to be, the admonition seems suspiciously convenient for a father of four who needs his rest.

No one could fault him.  Dusty has given up his few leisure hours to explain traditional drumming to anyone willing to listen, using these drumming sessions as introductions to Mi’kmaq spirituality for natives and non-natives alike.

One of the first things we learn is that the drumbeat echoes the heartbeat of Mother Earth.  Recreating her heartbeat is a sacred ritual, an act that sets us within nature and outside of it at the same time.  The drum isn’t an idol to be worshipped but rather an aid to spiritual experience, and followers of diverse religions are free to use it, to their benefit.

The deep worth of tradition

There’s a significant—and measurable—value in such rituals.  In 1994 an interesting study conducted in British Columbia showed that, although the aboriginal communities there had a higher than average adolescent suicide rate.  communities that promoted their traditional cultures actually had a lower than average rate.

It would seem, at least according to this study, that traditional cultural practices are effective antidotes to colonial oppression.  But why? The prevailing theory is that sound mental health demands need a solid sense of self, and to develop one we need to see ourselves as part of a continuity, i.e.  of something that’s been around for a long time and will probably be around for a long time to come.

I’m willing to bet that if similar studies could be conducted in non-aboriginal communities we’d see strong correlations between higher participation in traditional musical practices and robust mental health.  The current popularity of drum circles, drawing forth testimonies of enlightenment, balance, and enhanced energy, is one indication of the importance of a musical practice so primal and common to all cultures.

Might beating time along with Mother Earth’s heart heal the damage done by capitalism and industrialization? It would appear that it does, at least for some.  I’ve already talked about the magical serendipity of making music with others, and when the music we’re making is as primal as drumming, we’ve entered an alternate reality, one far more real and immediate than the one we experience by listening to a digitally compressed sound sequence.

Making music—or in particular, carrying on the music—of one’s ancestors, I believe has a mysterious healing power that can help get us through addiction, depression, suicidal ideation, and many psycho-social dilemmas.  Music is spiritual in origin and tends to return to its spiritual sources.  Surely in this circular journey music carries a message back to we the living.  But what might that message be?

A persistent demand for reconciliation

Justin Trudeau’s 24th of November (2017) apology on behalf of Canada to survivors of residential schools in Labrador and Newfoundland again brought to the fore of public consciousness the relentless quality of the demand for apology from First Nations peoples of the province.  Reparations were not enough; there had to be an expression of regret.

If you’ve ever felt compelled to ask someone for an apology you know it doesn’t often go well, and that their refusal to express remorse pretty much spells the end of the relationship.  After all, if they’re not sorry now, nothing’s to stop them doing it again.  And again and again and again.  Why would you put your heart out there repeatedly for someone to stomp all over? Whatever love you may have held for that person, the sensible solution is to start moving that love in another direction.

But a few First Nations people of Newfoundland and Labrador didn’t give up, and eventually the apology came.  Their perseverance carried an implicit but deeply stirring gist: “We value this relationship enough to do what it takes to make it work.”

Those few exceptional human beings were surely drumming while they waited, either in groups around large drums or drumming alone with hand drums, and this was among the things that gave them their strength.  The political urge toward reconciliation was an echo of the drum’s call to peace, of the Grandmother Song calling all of us to reach down into our roots to make things right in the world of the living.