Features
The Voice
An Interview with Marlin Schmidt 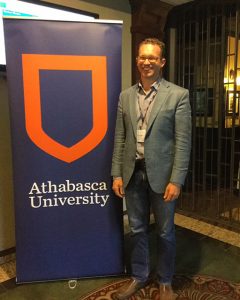 Recently, The Voice Magazine was invited to discuss education issues with Alberta’s Advanced Education Minster, the Honorable Marlin Schmidt.  We wanted to get a picture of the current issues facing Alberta education and politics; issues that apply not only to Athabasca University but also the overall climate of post-secondary education across Canada.

Alberta’s NDP government has been reviewing the post-secondary funding system in general and recently announced tuition freezes for the next academic year.  How far along is that process and what might be changing?

The tuition freeze in Alberta is now in its fourth year.  We will have another announcement about our policy in the spring.  But, because of the tuition freezes, a post-secondary student in Alberta will save over $1200 during the course of their program and that is something we feel is significant.

As you know, the current funding formula penalizes Athabasca University because the bulk of its students come from outside the province.  What is your ministry doing, either to change the funding formula in Alberta or to work with the other provinces to sustain AU?

We are still looking at the funding formula and are hopeful that we can find a way forward that supports AU.  We are committed to not raise AU tuition for out of province students, but we know that it is a work in progress.  We firmly believe in Athabasca University’s mission and mandate and we know that it fulfills a critical gap for education in our province and within Canada.  We want to make it easier for those students who want to improve their skills and obtain better careers to do so, and this includes AU.  We want to reassure Athabasca University students that its sustainability is important to us.

Recently, you told all Alberta universities to see some means of trimming their budgets.  What do you think the source is for the budget trouble that many universities are facing right now?

We feel that the previous PC governments’ refusal to make tough decisions about post-secondary education has led to the current situation and now we are trying to get a handle on what is happening currently.  We are focusing on the people who want to access post-secondary education, and to help them do so.  This includes using the community college system or any other means of doing that, in order for people to become the best citizens they can be and be a key part of Alberta’s work force.

AU also undertook a third-party review under Ken Coates, but little information has come out as to what changes AU is going to make to meet those recommendations.  What is your ministry doing to implement the recommendations in the review from the perspective of government?

The AU Administration is working really hard to implement those recommendations, and we in turn are working with AU’S admin.  For example, the recommendation to collaborate more with northern colleges has led to a partnership between AU and Northern Lights college.  There are some big challenges that AU is facing, but I am optimistic that with the new AU President there will be a strong revitalization of AU.

Let’s talk about the recent education platform by the United Conservative Party here in Alberta, led by former federal politician Jason Kenney.  On the surface, his ideas seem sensible and a back-to-basics approach to education that a lot of people agree with.

But we don’t agree with the approach they are using.

It’s not a bad idea in principle, but their math doesn’t add up.  The UCP’s platform has openly advocated for tax breaks for rich people, essentially creating a two-tiered tax system, and to cut post-secondary programs while also significantly raising tuition.  It is the wrong way to go about balancing the budget and it will sacrifice Alberta’s future prosperity.  My government, on the other hand, is taking the opposite approach.  We are expanding programs and creating more spaces for students—currently 1500 more students are able to access post-secondary education in Alberta than previously, and that number might seem small, but it isn’t.  We have frozen tuition for four straight years and want to make sure that more students have an opportunity to access post-secondary education.  We think that because of the previous Conservative government’s mismanagement of the education system that goes back years but is more noticeable starting with Alison Redford’s government, we need to rectify that and increase sustainability for post-secondary education.

So how would you do that? The United Conservative Party has said that it wants to train people for the skills gap and focus on university programs with that goal in mind.

Recently, the Calgary bid for Amazon failed.  This highlighted the current gap in expertise, which has been down to the lack of education and skills funding by previous Alberta governments.  The Amazon bid told us that we need more engineers and other positions who are trained and ready for the workforce.  That can’t happen if programs and services are cut.  We need investment in education, not tax breaks for billionaires.

After contacting the UCP, I was informed that despite their education policy being part of their platform that was reported on in other media sources and was written in their policy document, this was only a draft plan and likely to change extensively in committee.  Can you speak to this?

I don’t believe that statement at all.  The previous conservative governments in Alberta have had a strong track record of repeated cuts.  In the recent shadow budget that was presented in the legislature, over 400 million dollars of cuts were proposed.  The current UCP policy is consistent with past conservative practices.  We are alarmed by the UCP’s education proposals and are working to change things for the better so their policy of cuts doesn’t become a reality.  We believe that the past practices of conservative governments will be the future pattern.

We are also extremely concerned about the UCP proposal to severely curtail student unions in post-secondary institutions by letting students opt out of them by making student union fees an option, not a requirement, for students.  Student unions play a critical role in university advocacy and governance, both within their schools and by petitioning the provincial government on issues that matter.  They also enable students to have a quality of life during their programs as well as numerous social opportunities.  If student union funding was severely cut because of the ability for students to opt out, then much of that will be lost.  We don’t agree with that UCP policy at all.

Looking at the bigger picture of education, you’ve talked to a lot of stakeholders as part of your government portfolio.  What do you see as the biggest issues that post-secondary education is facing at the moment?

My big concern is about spaces.  Not just in the big urban universities, but all across the province.  Many students have the top grades but can’t get into the program they really want.  We need to ensure that anyone who wishes to go to college or university can do so—to better themselves personally, or to launch a career or upgrade their skills so they get a better career and be more productive in the workforce.  Investment in post-secondary education needs to continue to ensure people can contribute to their province’s economic well-being.

We also have a lot of work to do in changing the situation for those learners who are currently underrepresented.  Those who are mature students, like many of those at Athabasca, who have not had previous opportunities to access education.  We also recognize that opportunities for indigenous learners need to increase, so that they can access the programs and services they need to be successful with learning.  We want to make sure that our universities as well as colleges are well-equipped to provide for and support all the learners who want to access them wherever they may live.

A lot of people pay attention to university rankings, like the Maclean’s magazine annual report.  What is your take on these rankings and how do you think Alberta’s universities fare in them?

Of course, I am proud of the place that Alberta’s universities have in them because they reflect a high quality of education, but I realize that these rankings aren’t the whole picture.  I want to see that wherever students go to access their education—be it Athabasca University or a community college or university—they will get a consistent and quality education.  The key will be keeping the costs affordable.

Thank you so much for taking the time to speak with us.  The students of Athabasca University appreciate it.

You’re very welcome, and we really want AU to part of the discussion about post-secondary education.

An Interview with the Minister—November 21, 2018