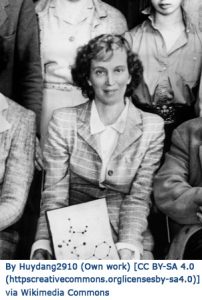 Dorothy Crowfoot Hodgkin was born May 12, 1910, in Cairo, Egypt, and died July 29, 1994, in Limington, Warwickshire, England.  In 1964 she was the third woman awarded the Nobel Prize in Chemistry for her development of protein crystallography. Dorothy’s other discoveries include the structure of penicillin, Vitamin B12, and the importance of insulin in diabetes.

She became interested in chemistry at the age of 10, when she received a chemistry book from a friend of her parents. At the time, she was one of only two girls allowed to study chemistry with the boys. Her mother, a botanist, encouraged Dorothy in it and by the time Dorothy was ready for university her mind was set—she would study chemistry. Beginning university in Oxford at Somerville College, she eventually moved on to Cambridge with her college education paid for by a Somerville scholarship and her aunt.  In 1932, Dorothy was the third woman to ever achieve an honors degree in Chemistry. Despite her outstanding marks she had difficulty finding work until J.D. Bernal of Cambridge University, a pioneer of modern molecular biology, provided on opening for her. In 1937 she was awarded her PhD for research on X-ray crystallography and the chemistry of the sterols.

Dorothy spent most of her career as a researcher at Somerville College at Oxford while teaching chemistry at the women’s college there before she became a lecturer.  In 1936 she was appointed the first fellow and tutor in chemistry, a position she held until 1977.  A distinguished honor for Dorothy was to be one of the first people to travel to Cambridge to see the model of the double helix structure of DNA constructed by Francis Crick and James Watson.  In 1960, she was appointed as the Royal Society’s Wolfson Research Professor. This provided the funding she needed to continue her research at Oxford.  One of her most remarkable research undertakings was the study of insulin, and she travelled extensively to promote her findings.

When Dorothy was twenty-four years of age she was diagnosed with rheumatoid arthritis. The pain in her hands and feet would become progressively worse throughout her life, eventually becoming crippling deformities.  Even though she ended up in a wheelchair, Dorothy never stopped her scientific research.

In 1937 Dorothy married Thomas Hodgkin, the Director of the Institute of African Studies at the University of Ghana. This is also where Dorothy spent a large part of her professional life.  Dorothy and Thomas Hodgkin were not allowed to enter the USA, except by CIA waiver, due to Thomas’ affiliation with the Communist Party. Although Dorothy was not a communist, she had strong views about social inequalities and was focused on the prevention of nuclear war.  At the age of 84, after having three children and three grandchildren, Dorothy died from a stroke at the home of her husband.