I had to think long and hard about the  picture to go with one of our articles this week. In the end, I chose the one that has more risk of being misinterpreted but is also more powerful.  The article in question is “More than a Mouthful” and you can see the picture chosen there.  In one sense, especially coupled with the subject matter of the article, the picture can be seen as objectifying.  In another, however, it can be seen as a recognition of female power, as the woman seems to be the one in control of, and enjoying, the situation. 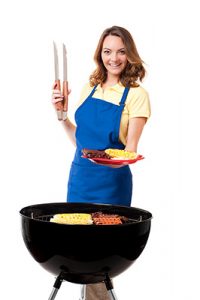 The other picture in contention was a much “safer” image.  An image that avoided any calls to sexuality even though the subject of the article itself is certainly sexual (or is that just me? After all, the image on this issue’s cover suggests yet another interpretation, even if it’s one that I expect most people don’t think of)  Yet, in its own way, this image can be seen as more reflective of inherent sexism, with the woman relegated once again to the duties of cook and server (presumably of a man, given the subject matter of the article).  And while that may be a position that a woman is entirely happy with, it shouldn’t be the default that we see and expect women to live within.  That the second picture is “safer” is something that I think should be called into question.

This question was especially relevant given the letter received after last week’s article “A Meeting of Women in Politics.”  As a white male, there’s a strange balance that I need to maintain.  On the one hand, I am the beneficiary of western society’s “easy mode”, and I try to be mindful of that and of when I am unconsciously being sexist or racist.  On the other, at a certain point, being mindful of one’s own advantages can cross over into simply denigrating yourself and those like you.  And where that line is, as evidenced by both the aritcle last week and the responding letter this week, is itself an issue open to interpretation.

It’s tempting to say that the era of #MeToo has made this all more difficult, but that’s a cop-out, in my opinion.  The problems that #MeToo are exposing didn’t just start when the hash-tag did. And saying #MeToo is making things more difficult is essentially saying that how things were before #MeToo was a better situation.  It wasn’t.  It should have always been this difficult to engage in sexism or racism, it just hasn’t been.

At any rate, the choice has been made.  I think I made the right one, but maybe you have a different opinion.  I’d love to hear it.

Beyond that, this week our feature article is an interview with a student who, like many of us, I’m sure, made a mistake with her education early on and has found AU to be a way that lets her fix it.  We also have some recipes for once you’ve gone beyond More than a Mouthful and are ready to celebrate Pi day, which also falls on March 14.  Plus we look at when it might be time to cut something from your life, whether a relationship or something else.  And,

of course our events, news, scholarships, thoughtful musings from students and more.

Editorial – Life is But a Stage

Write Stuff – Pretty as a Picture