Columns
The Voice
The Creative Spark—Wing it On Stage

Ever start a speech with a sudden faceplant?  If so, you’ve wobbled into the world of improv!

You can see the life skills learned from improv she lays out in her book in bold below.

Why?  “No!” fails to draw up goodwill, warm fuzzies, and helping hands.  Plus, “no”s stop stories midsentence.

A naysayer, my old boss, spewed “No”s. If you said, “Yes,” he said, “No.” And vice versa.  If you agreed, he’d switch his view.  His staff had higher turnover than nightfall in an asylum.  He’d bomb improv.

On stage or in life, when your jokes get met with, “Oh, shut up” and rolling eyes—don’t let the backlash stick.  Similarly, in boxing, when you get cracked in the face, keep jabbing.

My boyfriend treats me with unconditional love.  No critic from him.  The more time I spend with him, the more carefree life feels.

On the flipside, inner critics lead to depression.  I read a Pinterest pin that said, “Some people wish they had your bad days.”  A decade ago, I’d have given anything to have lived my worst days this year.  Despite happier times today, my self-critic roars.  My best advice?  Ignore critics when you flub; gag them when you sparkle.

In improv—and in life—you “must know what your character wants . . . to help create a story that moves forward in an interesting way” (Introduction, 23 of 633).  As for my life, my wants seem blurry, ever-changing.  I desire health, love—a career.  Outside of that, I need desire tune-ups.

A life lesson I learned? Discover your desires through the Myers Briggs personality test.  Then size up suitable career paths; plan your optimal life.

And don’t enroll in comp sci when it ranks worst on Myers Briggs.

In other words, don’t wing it in geek squads.  Wing it on stage.

The Creative Spark! – Plot Your Passing 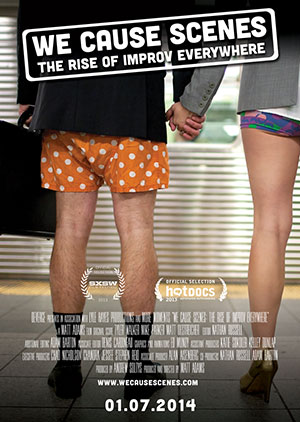 The Mindful Bard – We Cause Scenes