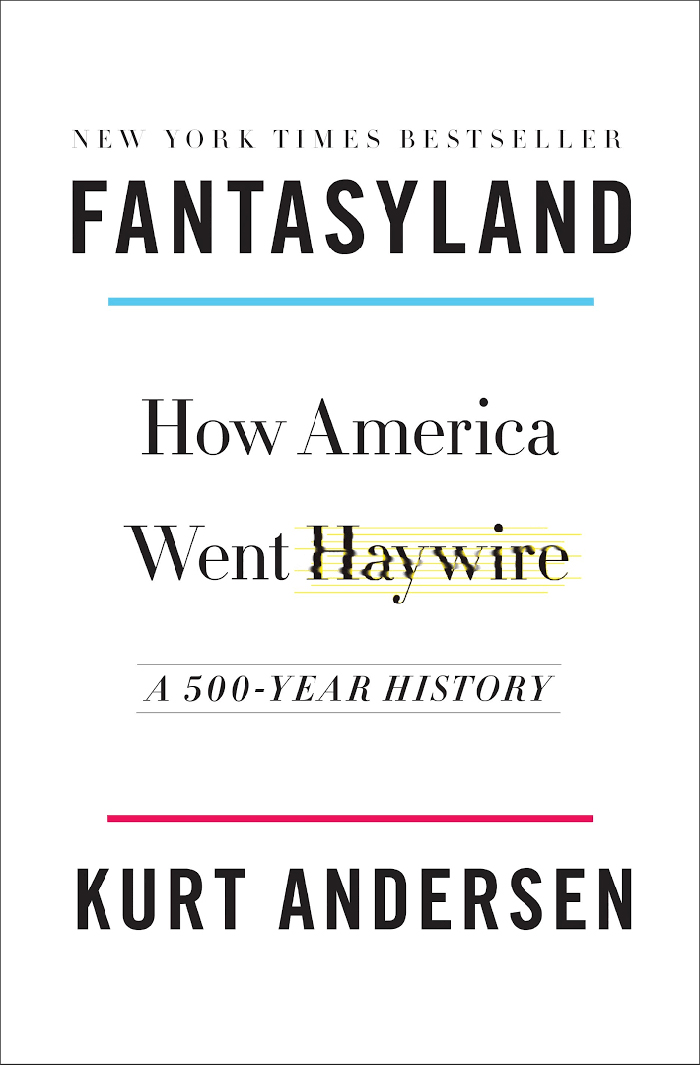 In contrast, Fantasyland: How America went Haywire: A 500-year History, doesn’t focus on Trump’s presidency, although Andersen describes it as a consequence of many Americans’ inability to distinguish between fantasy and reality.  According to Andersen, the choose-your-own-reality perspective has always been an aspect of American individualism.  The author presents a society where truth is malleable, and a large segment of the public gullible.  Sampling a wide-range of subjects in US history and culture—conservative Christianity, belief in the supernatural, conspiracy theories, the entertainment industry, the prevailing anti-science mindset and common distrust of experts—Andersen depicts a society exceptional in its irrationality.

Andersen claims that two forces were pivotal in creating the Fantasyland of modern American culture.  First, the counter-culture movement of the 1960’s not only protested the Vietnam War and experimented with drugs (to which Andersen readily admits his participation), but also relativized reality, bringing about a society in which the difference between feelings and facts have become indistinguishable.  And second, recent technological changes like the internet have allowed otherwise fringe beliefs to be spread, shared, and widely accepted with stunning efficiency.  But even before these relatively recent developments, Andersen argues, fantasy has been part of his country’s DNA.

Religion takes several hits from Andersen, especially Christians who regard the Bible as the literal word of God.  In terms of his argument about American exceptionalism, however, Protestantism, with its tendency to split into further offshoots, spurred American individualism and fostered divisions, leading to competing factions, each claiming its particular version of “truth”.  For this reason, the founding Puritans (“a nutty religious cult” according to Andersen) sailed to America to get as far away as they possibly could from their fellow European Protestants.  American Protestantism also created a style of Christianity which is particularly anti-science, opposed to the teaching of evolution, insisting that the Genesis creation story is literally true, and forcing many schoolboards to teach creationism as “science”.

Fantasyland doesn’t delve into the matter, but you don’t need to examine the fossil record to find problems with the Bible’s creation story.  Genesis contains two distinct creation stories: in the first chapter of Genesis, God creates animal life and humankind last, male and female; in the second chapter of Genesis, God creates the first human male, then creates all of the animals, and when none of the animals are suitable companions for the first man, God creates the first female.  (Most Jewish and Christian Bible scholars believe that each version is from a different author).  Even from a purely chronological perspective, belief in the literal truth of the creation story requires an Orwellian thought process.  It is no wonder then, that nonbelievers like Andersen are sometimes dismissive of religion.

If you believe in the literal truth of the creation story, then it’s probably not much of a stretch to believe Satan leads a vast conspiracy of devotees who practice dark arts that involve sexual depravity, murder, and cannibalism.  Conservative Christians, as Andersen reminds us, had a role in the satanic ritual abuse panic of the 1980’s and 1990’s.  At the time, many people were starting to talk about their actual experiences of physical and sexual abuse as children.  The belief in repressed memories also gained popularity around this time, and hypnosis became a controversial instrument for delving into past abuse with unfortunate consequences.  Based upon memories “recovered” under hypnosis, Michelle Pazder, along with her husband and former psychiatrist Lawrence Pazder, wrote a book called Michelle Remembers.  In it, she recounts her implausible and uncorroborated experiences with a satanic cult when she was five years of age.  Her narrative set the pattern for subsequent reports of satanic ritual abuse.

This period happened to coincide with a growth in conservative Christianity, a group that imagined a satanic program at work in the world, and willing to believe that Satanists were murdering and cannibalizing thousands of babies and drinking their blood.  In reality, the physical evidence for such crimes didn’t exist.  Nevertheless, the panic, bolstered by ABC News’s 20/20 and talk shows hosted by Oprah and Geraldo Rivera, placed pressure on police forces to investigate these claims.  Soon, the craze echoed the Salem witch trials.  People came forward with wild and impossible accusations, and investigators subjected children to prolonged and manipulative questioning until they finally gave statements that fit the expected depictions of satanic ritual abuse.  Before the panic finally ran its course, many innocent people had been charged, convicted and imprisoned, and numerous children removed from their homes in a bizarre modern-day witch-hunt.

Fantasyland focuses on the US, but Canadians helped to create the scare and were among its victims.  When Andersen writes that Michelle Pazder (and her psychiatrist turned husband, Lawrence) lived “just across Puget Sound from Seattle” he’s referring to Victoria, BC.  I’m guessing that Andersen wants to downplay the Canadian connection because of his central argument that belief in the fantastic is chiefly an American trait.  Apparently, Canadians can be irrational too.  (A retrospective article in the September 5, 2017 edition of the National Post declared “How Canada tricked the world into believing murderous Satanists were everywhere”).

Similarly, Andersen overlooks or perhaps is unaware that the hysteria was felt here in Canada.  “The Satanic Panic never really took off outside the United States”, Andersen writes.  That may be true, but it definitely didn’t stop at the Canada/US border.  After all, many evangelical and fundamentalist Christians in Canada are very similar to their US counterparts.  In the conservative Christian town of Martensville, Saskatchewan, a daycare worker was accused of sexually abusing a child.  The subsequent investigation by an inexperienced police officer, however, morphed into charges of satanic ritual abuse by a fictitious cult named the Brotherhood of the Ram.  Over one hundred charges were laid against nine people, including police officers.  In one instance, a child was shown photos of police personnel, and said that the officer in one of the photos forced the child to perform sexual acts at gunpoint.  In fact, the child and the accused officer had never met.  It would take the accused officer many years to have his name cleared.  An RCMP task force determined that “emotional hysteria” was responsible for the madness.  The province of Saskatchewan eventually apologized for this gross miscarriage of justice and paid out settlements to those falsely accused.

And while many American Christians imagine Satan and his cronies actively at work in our world, many American gun advocates are unable or unwilling to acknowledge the gun violence that permeates their society.  Andersen’s book was published before the February 14 shooting at Marjory Stoneman Douglas High School in Parkland, Florida, which resulted in the murder of 17 people.  But shooters, as Andersen writes, often engage in role play, seeking fame and taking revenge upon whatever forces or systems they blame for their unhappiness or failure.

Apart from the individual fantasies that motivate killers, many gun advocates are fearful of imaginary conspiracies.  The intention of the US Constitution’s Second Amendment was to ensure that a militia would be available to provide security for the nascent country.  For some survivalists, however, the right to bear arms validates their Armageddon plans, their belief that they will eventually need to battle the US government or some other perceived enemy.  And to the NRA, it seems any suggestion of requiring background checks on potential gunowners is merely a plot to enable the wholesale confiscation of privately-owned guns.  Some gun advocates even deny the reality of the 2012 Sandy Hook Elementary School shooting in which 26 people died, claiming that it was an elaborate hoax.  In the minds of many gun advocates, conspiracies aimed at clamping down on gun ownership have no bounds.

In contrast to Trump’s “Make America Great Again”, Andersen wants “to make America reality-based again.” He calls on citizens of his country to turn the tide against delusions and expose the lies that have become so common.  Andersen also raises the possibility that although the US is a leader in make-believe, other nations, including Canada are headed in the same direction.  If he’s right, we might all have to claw our way back toward rationality.

Despite its heavy subject matter, Fantasyland is a thought-provoking, entertaining, and enjoyable read.  Its wide scope will undoubtedly provide surprising insights.  (For example, “Half the states require no standardized tests or other measures for homeschooled children, and fewer than a dozen require home teachers to be high school graduates.” Those facts should alarm any rational person and raise concerns about the US’s alternate education system which allows families to shield children from science-based education).  Not everyone will agree with Andersen’s perspective; conservative Christians will take offence, conspiracy theorists will assume that it’s part of a vast misinformation campaign, and gun advocates will use the book for target practice.  In other words, the people who should read it probably won’t.