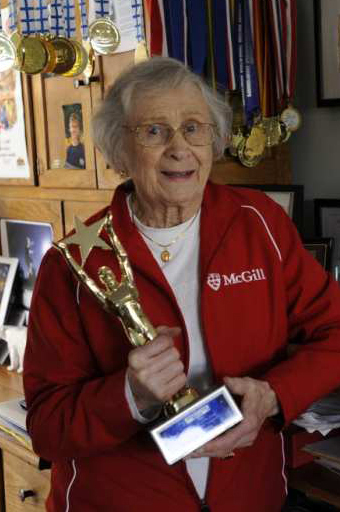 Olga Kotelko was born on March 2, 1919, in Vonda, Saskatchewan and died of an intracranial hemorrhage on June 24, 2014.  Kotelko was a Canadian legend in track and field who received 750 gold medals and broke many world records in her age category.

The seventh of eleven children born to Ukrainian parents, Olga grew up on a farm in western Canada at the time of the depression.  After graduating from the University of Saskatchewan, Olga began teaching in a one room school house in her hometown of Vonda, Saskatchewan.  Shortly after marrying, she discovered her husband was an abusive alcoholic.  While she was pregnant with her second child Olga left this abusive marriage and moved to British Colombia to begin her life as a single mother where she worked as a school teacher to support her two children.  Unfortunately, Kotelko’s oldest daughter died in 1999 at the age of 53 following a diagnosis of non-Hodgkin lymphoma.

During her early years, Olga played baseball but quit playing while working and raising her two girls.  At 77 she became involved in track and field and went on to earn hundreds of medals.  As well, she broke numerous world records within her age category.  Olga always kept active, participating in aquafit classes three times a week as well as sessions of jogging and walking.  She also took part in shot put throws and long jump.  In 2009, at the World Masters Games in Sydney, Australia, Olga proceeded to break world records in her age group (90-95 year olds), in hammer throw (5.64 metre) and the 100 metre race with a time of 23.95 seconds.  Olga Kotelko was honored to be asked to carry the torch in the Winter Olympic Games in Vancouver in 2010.  By the time she reached the age of 91 Olga held 23 age-graded world records in the Masters Track and field competition.  As stated in “The Gazette” of Montreal, Olga Kotelko, at the age of 90 was the world’s oldest known long jump competitor.

Due to her remarkable athletic accomplishments Olga’s muscle tissue and physiology have been studied by doctors at both the Montreal Neurological Institute and at McGill University’s Montreal Chest Institute.  The results were astounding.  Olga’s muscle fibers did not show any of the mitochondrial decay what would be present in a person over the age of 65.  Yet Olga did not believe she was unique, as when people would comment: “It’s amazing what you do.” Her response would be, “You know what? If I can do it, you can do it.”

Olga Kotelko’s life was documented in a biography titled, What Makes Olga Run?: the Mystery of the 90-something Track Star and What She Can Teach Us About Living Longer, Happier Lives by Bruce Grierson.  Olga also wrote her own story The O.K. Way to a Healthy Happy Life.

Shortly before her death, Olga Koltelko said, “I think that it’s once in a lifetime that you get an opportunity like that, but over 750 gold medals is quite treasured—and I give my medals away.  I don’t keep them.  Because why do I need 800 medals? At this point, I know I’m going to get some more.”

You can find more information on this truly remarkable woman in these links:

Women You Should Know – Emily Carr