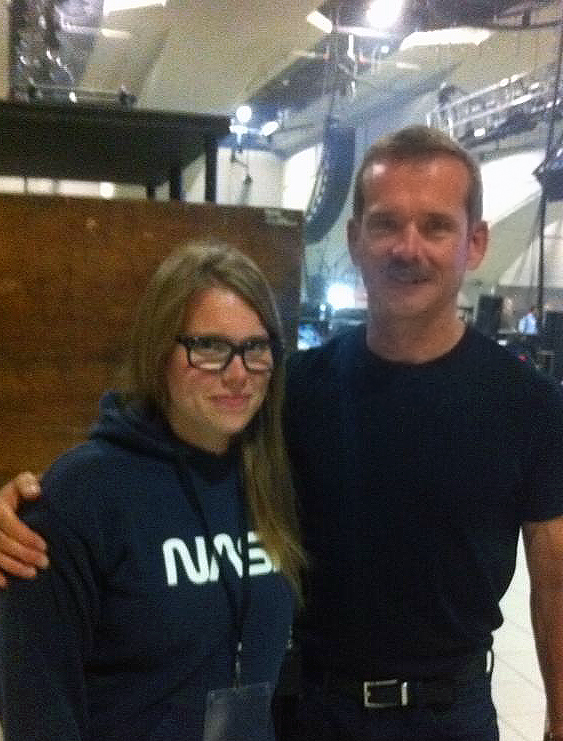 Natasha Donahue is an Athabasca University Students’ Union Councillor serving as the Vice President Finance and Administration, and an undergraduate student at Athabasca University.  Donahue is working towards an undergraduate degree in science with dreams of working at CERN and the Perimeter Institute.  She is a mom with a passion for science and a long history of volunteering for organizations such as Let’s Talk Science and the Living Backwards Medieval Society.

So, I live Barrhead, Alberta.  But I haven’t lived here my whole life.  I was born in Edmonton, but raised in Morinville.  That is about 45 minutes north of Edmonton.  It is pretty small as a community.  I have experienced many of the shortcomings that rural communities have, which are pretty common.

As a student, not having access to the same tools and resources, it has driven me in my social justice pursuits and volunteering.  I want to provide those students more of an ability to do what they want with their lives.

I do a lot of work with Let’s Talk Science.  They do not think this life in science is for more.  That is frustrating to me.

That is an interesting question.  LTS is how I got interested in Theoretical Physics.  When I started with Athabasca University, I was offered an opportunity with U of A to participate in a research study.  It was an innovative study.

It was about the past and present of Edmonton in terms of nanotechnology.  Particle Physics is how I got involved with LTS.  Throughout the duration of that study, I participated pretty heavily.

I was invited to be part of the exhibition at the Telus World of Science.  That directly brought me into that work.  Because I was a student.  They accepted me as a volunteer.  Let’s Talk Science is a national charitable organization.

They run in, last time I heard, more than 48 post-secondary institutions across Canada.  They are centralized in London, Ontario.  They could have changed in the last couple of years since I had been away.  I used to be a site coordinator for them.

I would help with the sites.  Leading into that, I was more interested in rural and Indigenous with them.  I expanded on the programming going down to places like Fox Lake, John D’or Prairie.  You have to actually access Fox Lake through a winter road, an ice bridge.

I was trying to reach places.  That people had not done a lot of outreach to before.  I went to the Northwest Territories and did outreach there as well.  That is how that all came together.  I was also given the opportunity to travel to London, Ontario and participate in two leadership conferences there.

So, what was the last book that you read?

This is going to seem like a copout, but it is my favorite book of all-time.  It is the Wrinkle In Time.  It was the first sci-fi book that I read.  I was 11-years-old.  It helped shape me as a person in preparation for the movie.  That was the last personal book that I read.

The last school book I read was, probably, was my Nutrition 330 textbook.

What show do you think everybody should binge watch?

Probably Cosmos, both the old one and the new one, I think the Carl Sagan version is still very relevant.

I heard it was watched by over a billion people by now.

That makes me very happy.

Why did you choose to run for AUSU council?

I wanted to run in the previous general election.  But at the time, I did not feel as though I had enough of a skill-set.  I have been since told that it wasn’t that as much of a skill-set necessary.  But I didn’t have enough confidence at the time.

That would be the best way to put it.  I wanted to get involved.  There are a lot of things at AU that I have my opinion about.  I think there are others who agree or disagree with me.  But I wanted to be a part of that conversation to move things forward for the students.

I have always been a big advocate to give people their voice.  I have been a strong voice.  I have a pretty loud voice.  I am not afraid to express myself or be heard if I feel something is important.  I am always willing to step up and say what other people can’t say for whatever reason.

So, I am not worried about how I am going to come off as a person in the long run.  Since I operate that kind of way, it is something that I should do since I am suited for it, whatever you call it.  I want to be that voice, as a social responsibility.  I should do that.

That is why I ran for it.  I am sure you read my bio.  I also ran an Indigenous program for education.  So, that program ended in December of 2016.  There was a lot of bureaucracy behind that.  That filled me with a new passion, too.

I spent about a year doing nothing.  I went back to school full-time and wasn’t working.  I got to the point where I needed something to be able to have an outlet for my political needs.  I needed to be able to influence that somehow.  I hate sitting by and not being able to do anything.

What are your academic goals for 2018?

I am planning to finish at least 6 courses this year.  I do not want to do them all at once.  I am enrolled with 3.  I want to finish those off.  I pretty much finished hit the part of my degree where I hit most of the core things.  I did my science and core classes.

Now, I am doing my options.  It will be picking things interesting to me, different than what I have been doing.  My academic goals are trying to keep an open mind and do things that are unfamiliar to me, so I can continue to learn and gain perspectives.  I have been looking into Sociology courses.

I think the first 3 this year will be Science and the last 3 will be Sociology.

If you could have a meal with someone from history, who would it be?

That is such a hard question, probably Robert Hook.  Becuase there is no living portrait of him.  There is nothing to base his appearance off.  I think he would be an interesting person to have a conversation with.

I think you would have to take what he has to say with a grain of salt.  I would be interested to say what he would have to say about Newton and the Royal Society.  I would say Robert Hook off the top of my head.

What is one thing that you would like to complete personally in 2018?

There are so many goals, which I have personally.  One thing, I would like to complete for myself.  This is going to sound nerdy.  But I really like sewing.  I am really into medieval re-enactment.  I have been working on my own personal kit.

I would like to complete a winter outfit: a cloak with a fur lining or a fake fur lining.  That is pretty much the biggest piece.  I need a heavier dress, stuff like that – probably one of those projects or a couple of paintings, which I have been commissioned to do.

Since being elected as a councillor (congratulations!), what are your hopes for the 2018-2020 term?

There is so many.  I have been doing a lot of research about how Council has been evolving over the years and the different initiatives.  There is an AUSU Strategic Plan, which has been recently approved.

I am looking at the ways to implement those – how I or we can implement those.  I am working on personal goals for this year as VPFA in what I can do for the students.  In the context of that plan, off the top of my head, my number one goal, this is something that I wanted to do with AUSU since I began working with LTS.

I want to see some science outreach happening in the communities.  So, that is something that I would love to spearhead.  I do not know if it is feasible for this year given the other things we are working through this year.

I still have a meeting with Brandon upcoming to discuss the goals that myself and Melinda, the VPEX, have; it is putting everything in context and creating timelines.  if that is something feasible and there is an interest, I would love to spearhead it and see the ball rolling on that.

Thank you for the opportunity and your time, Natasha.