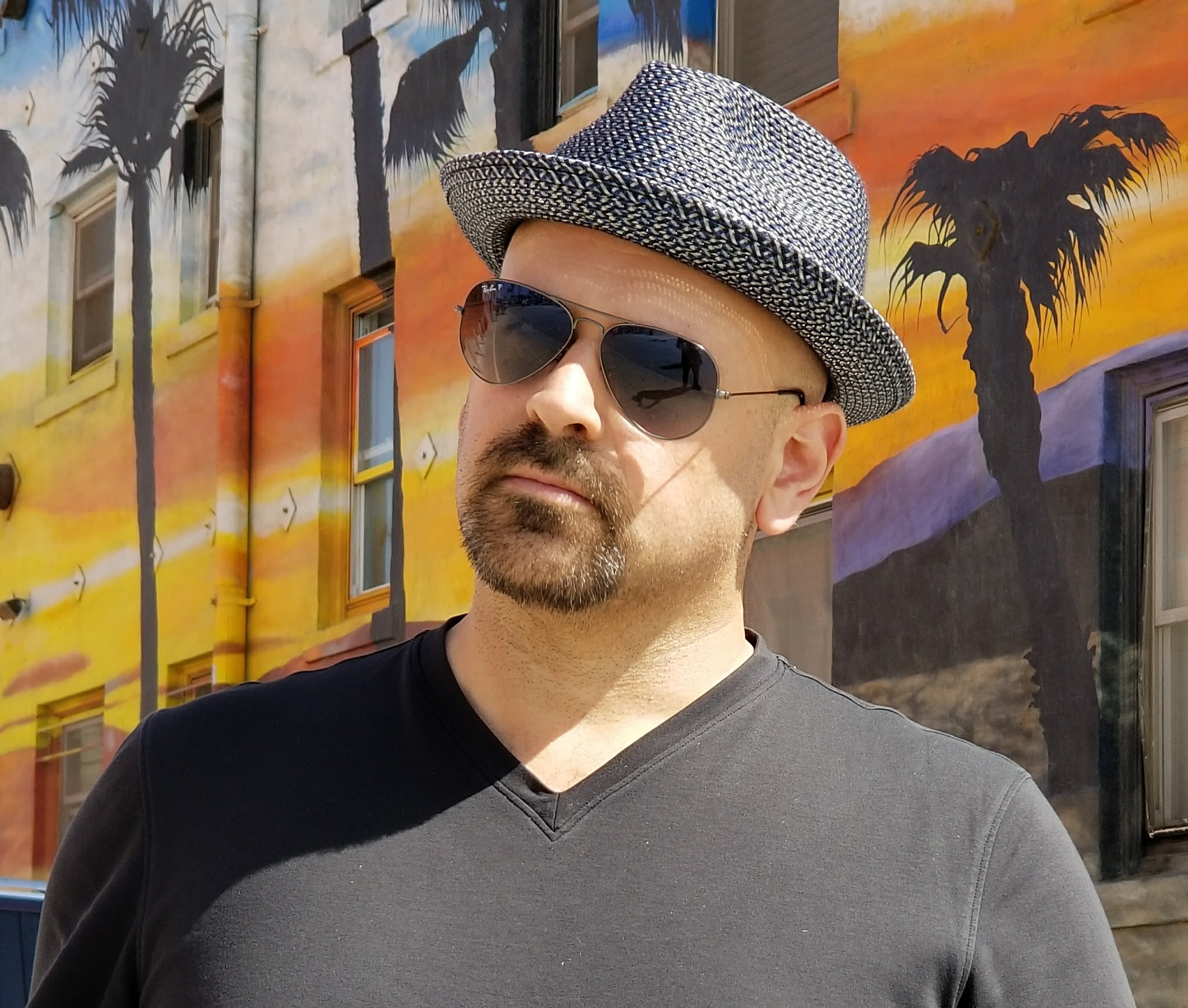 Israel-born, Los Angeles-based, Nir Yaniv is a creative whirlwind, producing musical compositions, film, illustrations, animation, fiction, and more.  His latest EP, The Voice Remains, is set for release on June 15.  The album could best be described as instrumental, Yaniv’s voice being the sole instrument except for drums; it’s as if he scat sang the whole thing and then used his electronically manipulated voice to simulate bass, keyboards, and guitar.  The music is delightfully upbeat and playful yet intellectually engaging.  (Be sure to take in the videos for his songs “Memories of a Third Planet” and “The Voice Remains.”) Yaniv recently took the time to talk to us about his life, his art, and his new album.

I was the kind of kid who had to be urged to go out of his room.  I liked reading, music, and computers.  I started programming at the age of 9, but we didn’t have the money to buy a computer until I was 12, so in the meantime I had to go to friends’ houses to play with their computers, which I guess was a good excuse as any to get out of the house.

I grew up in a quiet suburb near the city of Haifa, in Israel, which to me meant that the most interesting thing around was the local library.

What role did the arts play in it?

I never dreamed of becoming an artist of any kind, but I realise that much of what I’ve spent my time on made me who I am today.  I read a lot of science fiction, which greatly contributed to me becoming, later on, a published science fiction author.  I listened to a lot of music, and used my Commodore 64 computer (yes, I’m that old) to create primitive beats and tunes.

Like many of my friends, I loved singing along with whatever was on the radio, but unlike them I tended to sing the bass part, or the guitar riff, or the saxophone solo.  That contributed a lot to me becoming the musician I am.

Were you trained in music and art or did you teach yourself?

When I was 22, already a veteran software developer and quite bored with it, I went on my first business trip to New York, and my first act there was getting a ticket for whatever show the Blue Note had that evening.  It was a great show by Maynard Ferguson’s band, and I was lucky enough to be sitting at the same table as some musicians — friends of the band.

After several hours of show and deep conversations about jazz, one of them said, “But hey, what instrument do you play?”

I said that I didn’t, and added that the ripe age of 22 is way too late in the game to start.  “But you’re a musician, man,” the other guy said, and continued with a short yet decisive speech, which included the tale of someone who started with the saxophone after retirement and was now 90 years old and on tour.

And so, upon returning home, I enrolled in music school.

That was one of the best decisions I’ve made in my life.

Who—or what—has been the best influence on you as an artist? As a human being?

I would like to suggest, instead of who or what, a how and where.  I find great pleasure in cross-influence.  My music is influenced by science fiction novels and old animations no less than by jazz and fusion giants.

My short films (I’ve written and directed a few) are influenced by satire and fiction in any form, not only cinema.  My writing, on the other hand, takes a lot from music, especially in terms of meter and tempo.  And my animations take anything from anywhere.  This is where, to me, the fun lies.

What do you like best about your new album, The Voice Remains?

First, I should mention that this is a vocals and drums project — there are no other instruments.  All the vocals are performed by myself, including parts which on first listening might sound as a bass, an electric guitar or a synthesizer.

But initially, I didn’t mean to make an album at all, it sort of just happened.  I set out to record a demo for a great audio fx that a friend of mine created (called Manipulator), which enabled me to do many interesting things with my voice.  Half an hour later, I knew that it was way too good for just a demo; it was going to be my next project.  The creation process continued to be very spontaneous, and I believe the resulting energy and happiness are evident in the final result.

All but one of the melodies came to me while I was riding my motorbike from work back home.  Since there’s no reasonable way to record audio while riding a motorbike (please don’t try to prove me wrong), I had to repeat the songs over and over, inside my helmet, then while climbing the stair to my apartment, until finally getting to a computer and laying a quick demo before I forget everything.

This got me some really weird looks, in the street.  That is, I guess, one of the risks of being a musician.

How do you come up with the titles for your tracks, in particular “Five Formidable Feats” and “The Seventh Garden?”

By no particular design, I found that whatever melodies I had in my head were of asymmetrical meters, such as ⅜, ⅝ and ⅞.  The only track I had a name for, after principal recording was finished, was “The Voice Remains,” which lent itself to the album as well.  And so it occurred to me to incorporate the meter into the names.  Five Formidable Feats is indeed in the 5/4 meter.  It was also, coincidentally, the fifth track to be recorded.  “The Seventh Garden,” which was actually the first track and the one that I started as a demo, is in ⅞.

Who or what is that little sprout in your video for “Memories of a Third Planet?”

The little sprout, which I call the Plant-Child, was born on an alien planet which may or may not be a distant future earth.  They are an anomaly, in a tyranny governed by a flower-king and an army of mutant trees.

My second music video, for the title track of the album, depicts the birth and escape of the plant-child until meeting the protagonist of my first music video, whom I call the Explorer.  In future videos, which I’m currently working on, both of them will have some adventures together.  In other words, this is only the beginning. 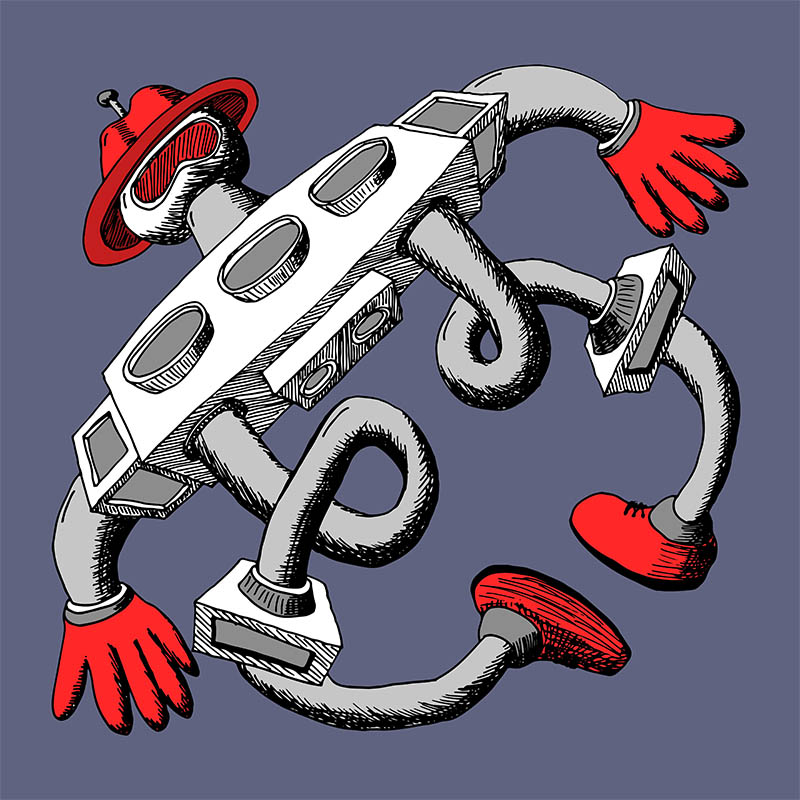 What conditions do you need in your life in order to maintain your creative flow?

My main trick is always having more than one project in more than one medium at any given time.  When I feel no inspiration for making music, I turn to writing.  No writing? Drawing.  No drawing? Photography.  No? Video.  No? Music.

Another trick has to do with the easiness or casualness of creating art.  I make sure that at least some of what I’m doing is very easy to do.  For example, there’s always a small sketchbook and some pens in my bag.  This makes drawing very easy and accessible, and something I can do anywhere.  Yes, I could also have a big canvas and watercolors or oil paints in my studio, but this means that I have to make a big deal out of every drawing or painting.

Having a pen and a sketchbook means that I can work on it while having a coffee or waiting for the dentist.  And this, in turn, makes me feel positive about everything else I do: a day can’t be really bad when I’ve already drawn a weird chicken in the morning.

Too many to count, but in the context of this project, I’ll mention one in particular.  I spent several months looking for visual ideas to accompany the music of The Voice Remains.  I had a vague notion that it would be animated, but nothing more than that.  Then I came upon a French animation film from the early seventies, called Fantastic Planet.  Its imagery, music and vibe simply ignited my imagination.  I realised, then, that I could use some of the techniques employed by this film’s creators—in particular, cut-out animation—to create my own strange visual universe.  It has been a revelation.

Are you a genius, or do you just drink too much coffee?

Are five cappuccinos a day too much? Or maybe four? And anyway, I can quit anytime I want!

At the moment I’m working on the next music videos in the project, slowly building them into a single, longer work.  During that process, while trying to figure out some sound effects to fill a few quiet seconds of animation, I accidently created several more tracks, enough for a new short EP.  There’s also a new novel in the works, and I create at least one drawing a day, usually in a public place.

Yes, that strange behatted person drawing aliens in your local cafe is probably me.