Columns
The Voice
Book Review—Fall Down 7 Times, Get Up 8 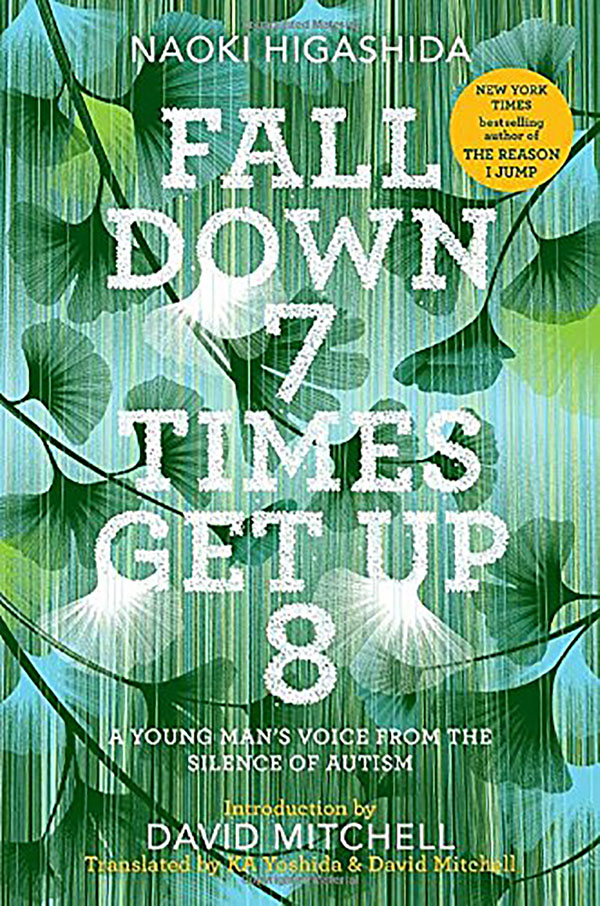 To a great extent, autism is mysterious disorder.  Its possible causes have been a mystery for a long time and are still being investigated.  Some early psychoanalytic researchers held the view that “refrigerator mothers” were responsible for their children’s autism.  More recently, anti-vaccinators seized upon childhood inoculations as the culprit and refused to have their children immunized, leaving many children and young adults vulnerable to harmful viruses.  Currently, it is thought that genetics are a contributing factor but the effects of parental age, bacterial or viral infections, and exposure to pesticides, heavy metals, and even electromagnetic radiation are being considered by some researchers.

While investigators work to uncover the causes of autism, the perspective of someone with severe nonverbal autism is, to a great extent, also a mystery.  Nonetheless, it is possible to find insights into the mind of one young man who struggles with this form of autism.  Japanese author Naoki Higashida has written more than twenty books, two of which have become international bestsellers, The Reason I Jump, and, most recently, Fall Down 7 Times Get Up 8: A Young Man’s Voice from the Silence of Autism.

For many people, writing can be a struggle, but for Higashida it is an especially difficult task.  It requires him to point to the letters of the English alphabet printed on paper in a QWERTY keyboard arrangement and vocalize the corresponding sound in the Japanese hiragana alphabet.  Meanwhile, another person must transcribe his words.  (Videos such as his series “What I’d like to convey as a writer” on his YouTube channel give one a sense of the tedious process involved).  An image of an alphabet grid, smudged and obviously well-used, is reproduced in Fall Down 7 Times Get Up 8.  Alternately, Higashida can write using a computer but he gets distracted by the phonetic text-converter.

The Reason I Jump and Fall Down 7 Times Get Up 8 were translated into English by KA Yoshida and David Mitchell.  Mitchell is an accomplished author, having written several popular novels including The Bone Clocks and Slade House.  He is married to co-translator Yoshida and the couple have an autistic child.  The couple became aware of the original Japanese edition of The Reason I Jump as they searched for information to help them understand their own child.  Mitchell also provides an introduction to Fall Down 7 Times Get Up 8, helping readers to understand the depth and significance of Higashida’s writing, and how it influenced the way in which Mitchell and Yoshida interact with their own autistic child.  Apart from the difficulties in raising an autistic child, Mitchell explains that he also struggles with society’s ignorance of autism.  He confronts the beliefs of some critics that a person with severe autism could not write books, that the young Japanese author or someone around him is orchestrating a hoax, or that Higashida was misdiagnosed and is not really a severe autistic.

In particular, some critics of The Reason I Jump, written when Higashida was 13 years-old, suggested that facilitated communication – a communication technique in which a caregiver gently touches the hand of a disabled individual in order to help them point at letters on an alphabet board or press keys on a keyboard – had been used in writing the book.  The concern with this controversial method is that the words produced are those of the facilitator, rather than those of the disabled person.  In Fall Down 7 Times Get Up 8, Mitchell and Higashida respond to the controversy associated with the earlier book and deliberately emphasize that the author has no physical contact with anyone else when he is using his alphabet grid for writing.

Higashida not only addresses critics who refuse to acknowledge him as an author, but also disproves the assumption that people with severe autism must be intellectually disabled as well.  Through short, insightful passages, Higashida demonstrates an awareness of himself and the world that surrounds him, as well as the assumptions that people make about him.  He is aware that he is different from neurotypical people, aware of his own struggle to work through emotional meltdowns, and aware of the difficulties that his parents are faced with.

He shares the frustration he experiences when he tries to communicate with others and explains why he sometimes involuntarily utters some seemingly random phrase that he may have learned in school or heard in an advertisement, describing these compulsions “like a replay button that I have no control over.” He writes about the challenge of dealing with his obsessive behaviours, the involuntary sounds and motions that he makes, and the judgments made by strangers.  The short stories, commentaries on his everyday experiences, poetry, and excerpts from a newspaper interview demonstrate that, in spite of severe disability, he is ultimately a thoughtful observer of himself and others.

Poignantly, the first and last stories in Fall Down 7 Times Get Up 8 are about Mother’s Day.  “Mother’s Day 2011” is but a single paragraph in length, nevertheless Higashida conveys his profound sadness about being unable to simply say “thank you” to his mother.  In the final story, “Mother’s Day 2013”, he is able to tell his caregiver of his wish to buy a carnation, which he later presents to his mother.  His small request, “Carnation …  Buy”, is no simple task for someone with his disability, and he explains the difficult process he had to undertake to produce these two words.  Taken together, the two stories illustrate his passionate ambition to connect with other people.

Through his writing, Higashida has managed to take away some of the mystery surrounding autism.  Through translators Yoshida and Mitchell, he has managed to bring that to English-speaking readers as well.  Mitchell’s introduction, written from the perspective of co-translator and parent of an autistic child, complements Higashida’s insights from the realm of autism.  In translating Fall Down 7 Times Get Up 8, Mitchell and Yoshida bridge a language gap, while Higashida, through his books, bridges a gap between the world of severe nonverbal autism and the neurotypical world.