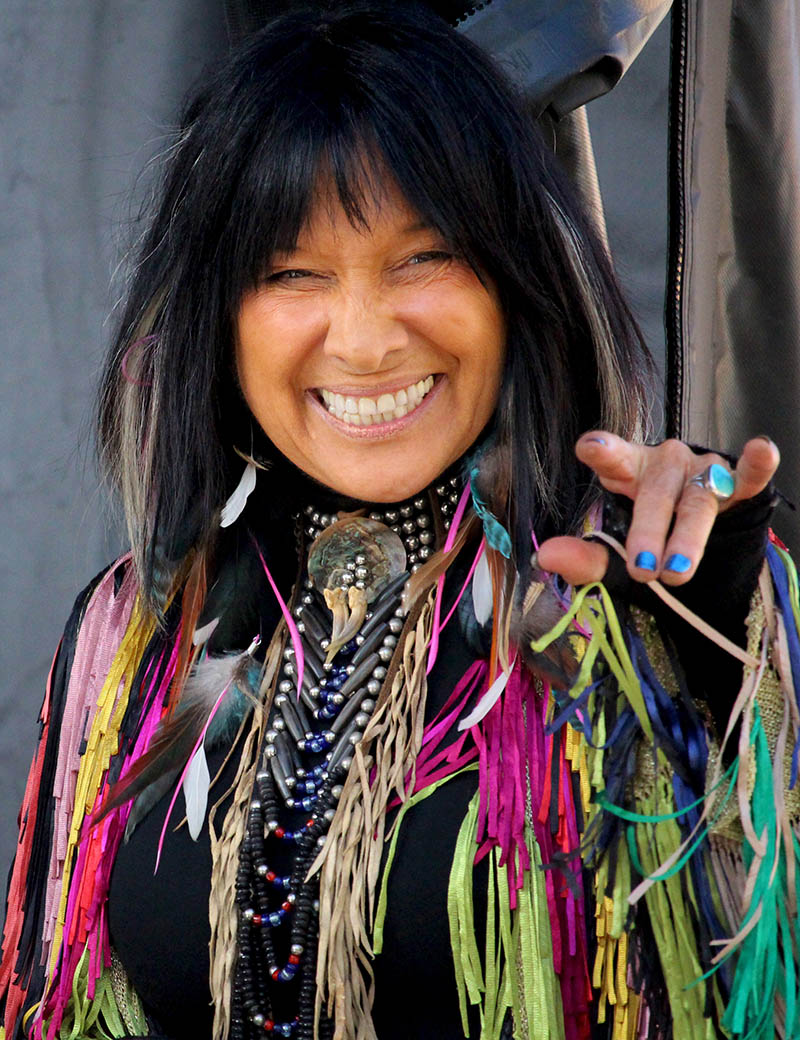 Buffy Sainte-Marie is a Canadian singer, songwriter, pacifist, and humanitarian who was a fearless advocator for the issues faced by Native Americans. She has received many accolades and honors for her work in education and social activism, including both an Academy Award and a Golden Globe Award for the best Original Song in 1983 for “Up Where We Belong.”  Also, that same year, she received an Honorary Doctor of Fine Arts from the University of Massachusetts.  Sainte-Marie was inducted into the Canadian Music Hall of Fame in 1995.  She became an officer of the Order of Canada in 1997. And these are just a few of the many honors and awards Buffy Sainte-Marie received in her over forty-year long career.

Buffy Sainte-Marie was born Beverly Saint-Marie, February 20, 1941 in Qu’Appelle Valley Saskatchewan, Canada, on the Piapot Plains Cree First Nation Reserve.  Shortly after birth, she was adopted by a couple from Massachusetts who were of Mi’kmaq descent.   Buffy graduated from the University of Massachusetts Amherst with a degree in teaching and Oriental Philosophy.  In 1968, she married her first husband, but they divorced a few years later. She had a son with her second husband, but that marriage also ended in divorce.  Her third husband died of a heart attack.

Immersed within the 1960’s folk scene, Buffy spent a lot of her time in the coffeehouses of Toronto’s Yorkville district and New York’s Greenwich Village alongside other Canadian singers including Leonard Cohen, Neil Young and Joni Mitchell.  After witnessing wounded soldiers returning home from Vietnam while the government denied any involvement, Buffy was inspired to write her protest song “Universal Soldier” that later became a hit for Donovan.  In the 1970’s Buffy claimed she had been blacklisted by American radio stations, as Presidents Johnson and Nixon had been sending letters to radio stations praising them for not playing her music, thus putting the protest movement out of business.

Buffy Sainte-Marie released 13 albums throughout the 1960’s and 1970’s. She continued working in television and composing music throughout the 1980’s and 90’s.  In 2008 a double CD was released titled Buffy-Changing Woman/Sweet American. She also made a comeback within the Canadian music scene with the release of her album Running for the Drum.   Also, Buffy Sainte-Marie appeared on Sesame Street sporadically during the 1970’s as she wanted to show the young people that “Indians still exist.”

Buffy’s 19th album Medicine Songs won the 2018 Juno for Indigenous Music Album of the Year. Throughout her long and prolific career Buffy Sainte-Marie has been a voice and an inspiration to many indigenous and female artists.

People sometimes ask me, because of the blacklisting, “Do you hate the government? Don’t you hate white people?” No, it’s greed that’s the problem.”
— Buffy Sainte-Marie

Additional information on this remarkable woman is available at:
https://www.inspiringquotes.us/quotes/Ye5B_QnvSID6e
http://buffysainte-marie.com/

Women You Should Know – March Women