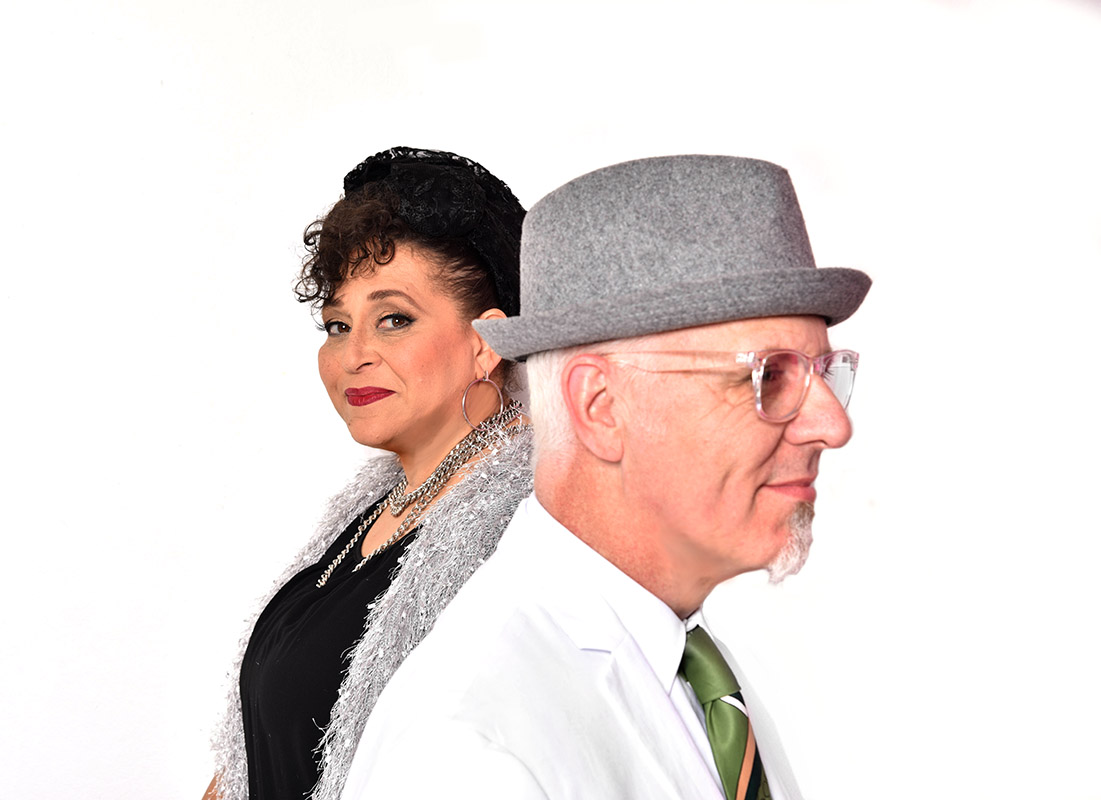 BlissBliss is the husband-and-wife duo Lang and Renee Bliss, music industry veterans known for a sophisticated, jazzy-pop sound that’s the perfect vehicle for their upbeat, triumphant-sounding lyrics.  The couple manifests a glowing positive energy that’s utterly infectious.  A case in point: A video of one of the songs, “Right Where You Are,” is just the thing to make you fall in love with your squeeze all over again.  Their third project together, a new EP aptly named 3, is set for release November 16.  Recently Lang and Renee took the time to answer our questions about their backgrounds, their projects, and what it’s like to share both a marriage and a musical career.

What kind of childhoods did you have?

RENEE: I grew up in Indiana in a multi-racial, low-to-middle class neighborhood.  I was the oldest of four siblings, and my father was from Cuba.  I had a pretty average childhood for a kid growing up in the ‘60s.

I grew up roller skating to Motown, Soul, and R&B music; it had a huge impact on me.

LANG: I was born in Richmond, Virginia.  My father died of cancer when I was four.  My mom remarried, and we moved up to the Shenandoah Valley of Virginia.  My mom played piano and my stepdad played sax.  I grew up listening to classical and swing music.

Were you trained in music or did you teach yourselves?

RENEE: A little of both.  I used to sing along to the songs I heard on the radio and at the skating rink.  I wanted to play piano really badly but ended up playing flute for a short time.  In high school I was in choir, where I learned the basics of music theory.  I ended up teaching myself guitar and took voice lessons in college.

LANG: I started playing drums when I was 13, when my mom and dad bought me a little jazz drum kit.  I would play along to the radio every day after school for a few hours in the basement and then lots of time on the weekends.  I ended up putting a band together with some friends and that was pretty much the end of any other pursuits for me.

I took music through all of my high school years and then went on the road playing for a company that produced bands and did high school and junior high school assembly shows through the school year.  I did that for four years traveling throughout the US, Canada, and Australia.  After I had begun playing professionally, I wanted to get more training, so I went back to school in New York City and studied percussion and drum set.

Who—or what—has been the best influence on you as an artist? As a human being?

RENEE: Outside of my mom, the woman that encouraged me the most was Dee Miller, who was a teacher of mine.  She told me that I had a gift and to share it with others, and she put me on stage to do my very first solo performance when I was nine.

How do your songs come to you?

RENEE: For me, the songs mostly come to me in a melody and/or lyric idea.  Usually my lyrical and musical ideas come from observations of life around me.

LANG: I think they come out of both the musical influences I grew up with and the worldview that I have about life.

What’s the story behind the song “Right Where You Are?”

RENEE: I think Lang should answer that!

LANG: I wrote the first verse of the song initially inspired by an argument that I got into with my younger sister! I felt like a schlep, but it lead me to think about relationships in general, and we decided to make the song about the process of forgiveness and reconciliation.

Can you tell us a little about 3?

LANG & RENEE: This project was recorded differently than our previous ones.  On the other two, we primarily worked in an overdub approach.  We had the basic chord progression of each song finished as midi parts and then added to and/or replaced them with live players.

We had always wanted to record with players all in the studio together at the same time to get more interaction between them, so that’s what we did this time.  We got three other friends of ours—a keyboard player, a guitarist and a bass player—and we tracked all five songs in one day.  We did go back and re-cut the vocals and add some bits and pieces afterwards, but the songs were very close to finished that day.

Has anything funny or weird happened while you’ve been creating the EP?

LANG & RENEE: One thing that happened over this time period was that the bass player, Tim Gaines, who played on the project, moved out of state.  He had also been playing with us live, so when he left, we needed to find someone to fill that spot.  Our oldest son, Zane, who had been learning bass and practicing for the previous year or two, came home from living and going to school in Colorado and really surprised us with how much he had developed; we just freaked out at how good he was! So we excitedly added him to the group.  He ended up playing on one of the tracks on the EP, “No Apology.”

Can you tell us a little about how you reconcile your creative relationship with your relationship as a couple?

LANG & RENEE: We both have a love for music and are on the same page with what we want to accomplish both musically and business wise, so there aren’t really any places that we find that we don’t agree on things.  Our relationship as a couple just flows over, for the most part, to our relationship creatively.

How do you regenerate after giving yourself heavily to your art?

RENEE: For me, I try to spend time doing things I enjoy that are not music-related but still creative.  I love gardening and art.

LANG: I mostly just want to veg out.  I love relaxing at home and watching a good movie and not having a schedule that I have to follow.  I love making a good latte, and I like to hear Renee say, “Man that’s good!” Ha!

What conditions do you need in your life in order to maintain your creative flow?

LANG: Peace.  I have to spend time most every day getting alone with God and finding peace.  That affects my creative flow more than anything.

RENEE: Yeah, what he said! And I would add staying focused on the bigger picture and not getting bogged down with the daily grind of life.

RENEE: “I’m Coming Through” was written based on our love of spy movies.  I love stories about people who beat the odds, and that inspires a lot of the lyrical content in the songs.

LANG: There are so many albums and influences, in terms of music, that I’ve been inspired by.  We both love pop music from the ‘60’s, ‘70’s, and ‘80’s, but we also love jazz and that as well, has found its way into my ideas about harmony and groove especially.

Do you follow a spiritual path that informs your art?

RENEE: Yes, we do.  Faith in God specifically informs our worldview and all that we desire to live out in our daily lives as well as our art.

LANG: We both are believers in Jesus and try our best to live in a way that reflects the best that God has designed for humanity and write and sing songs that inspire all people.

LANG & RENEE: BlissBliss creates musical experiences for friends and fans of a retro yet modern world, and the citizens of that world awaken to follow their dreams.

RENEE: We’re releasing our EP in November as well as a video for the final single on the project, “Bulletproof.” It’s currently being edited and the single releases on November 2nd.  We also have a batch of dance remixes of our song, “I’m Coming Through” coming out soon after that.

LANG: We’re hoping to get back into the studio soon to record the next batch of five songs, and we’ll be heading out to the west coast to do some live shows in the beginning of 2019.

Be sure to pick up our EP 3 at any of your favorite digital stores on November 16th!