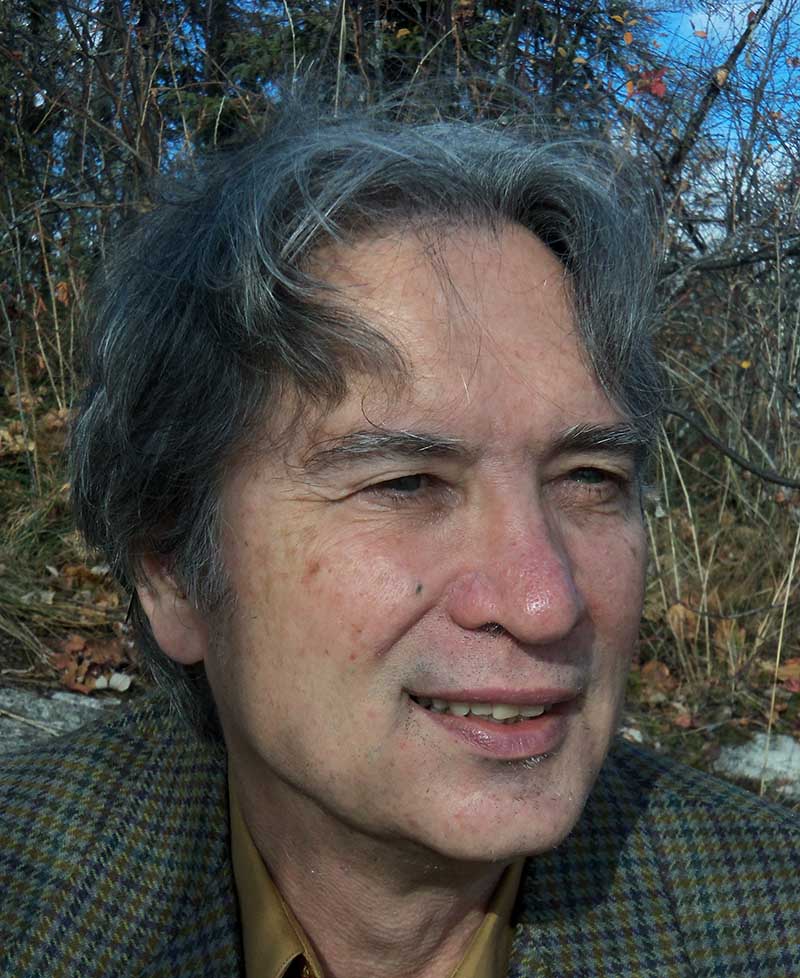 Hawkeye Robertson is a Faculty Member in the Master of Arts – Integrated Studies Program of Athabasca University, who is now in career transition.  He has a private practice as an educational psychologist and counsellor.  Here we get to know about his life and views.

How did you grow up, e.g., place, time, language, and religion or lack thereof?

My parents were fundamentalist Christian.  More correctly, my mother was fundamentalist Christian.  When my stepfather proposed (I was seven at the time), my mother insisted she would marry him only if he found the Lord.  He had been a nominal member of the United Church but this did not count as Christian in her view. The Church of Christ, that she belonged to, was what was acceptable.

Meal time was a bit of challenge in our home.  Mom had a deck of cards with scripture on one side (King James Version) and chapter and verse on the other.  Each person who wished to eat had to first read a scripture and then, without looking at the back, name the chapter and verse.  Failure did not mean unplanned fasting.  One simply read the next card and so on until one found a known scripture.  When that got too easy mom flipped the deck over and we had to read the chapter and verse and then recite the passage verbatim.  Because I had a healthy appetite, I learned a lot of scripture.

Baptism, in this variation of Christianity, involved making a choice to set aside a life of sin and lead a life of righteousness.  The second last song of every religious service was a hymn of invitation inviting sinners to make this choice.  I responded to the call at age 12.  No one in our congregation had previously been baptized so young.  Tradition had it that Christ was baptized at age 12.  The council of elders was immediately convened in a board room and as my worried stepfather looked on, I had to answer questions about the nature of sin, redemption, and my purpose in pursuing baptism at my age.  As each succeeding question was answered with quoted scripture, my father began to smile.  After a gruelling two-hour ordeal, the elders came back to the waiting congregation and announced that the baptism would proceed.  We did not have a baptistery.  So the minister led a caravan of believers to a small lake north of Lloydminster where men of the congregation cut a three foot square in the January ice and then punched a hole in the bottom allowing unfrozen water to bubble up filling the crevice.  The minister and I went down into the icy water as the congregation, holding candles, sang hymns.  As I was lifted out of the immersion process, I believed the holy spirit had entered my body.

As a baptized male, I had the rights of an elder.  I could lead singing, say prayers for the congregation, give sermons, and of course, vote on the affairs of the Church.  My mother, who was the devout one in our family, could do none of these things.  This troubled me and may have led to my identification with Women’s Liberation some years later.

When did you begin to develop an interest in psychology, psychotherapy, and the qualitative sciences of the mind?

I would like to blame one of my profs at the University of Regina.  He berated me for wasting my time on three undergraduate degrees.  Then, in 1982 or early 1983 he called and informed me that I had been accepted.  I asked, “Accepted into what?” He said “Graduate school, the committee met and you have been accepted.” I replied, “But I haven’t applied.” He said, “We discussed that too, the papers are on my desk ready for you to complete.” But I think my interest in psychology probably predates this interaction.

I entered puberty when I was 12.  One night, an aunt accommodated my erection.  I believed that I had committed a grave sin and my sensual pleasure was a sign of my wickedness.

Unlike the Catholics, who could confess their sins in private, members of the Church of Christ were expected to confess their sins before the entire congregation.  I could not see me walking to the front of the church during the song of invitation and describing the incident while my mother and aunt sat together in the second pew to the right.  Baptism was meant to wash away undisclosed sins, and it struck me that I had been innocent when baptized earlier, I had had no real sins from which to repent.  Therefore, my baptism was not legitimate.  Now I needed to be truly baptized.  Again, there was a council of elders and I was able to convince them that the first baptism may have been conducted for the wrong reasons, but if not, a second baptism would merely be a reaffirmation of my faith.  As far as I know, I was the only member of the church to be baptized twice.  Ever since, I have had an interest in how people build worldviews and rationalize their behaviours.

You are now the Vice-President of Humanist Canada.  Freud, famously, regarded God as an illusion; indeed, an infantile need for a father figure with great power.  Has psychotherapy influenced your personal views on faith and spirituality?

I was an atheist long before I studied Freud.  I was questioning religion by the time I enrolled in the University of Saskatchewan at age 17.  It wasn’t just the status of women in the church.  It was the illogic of salvation.  How was it I had the good fortune to be raised to be one of the saved who would go to heaven when the church did not even exist in many parts of the globe? I did a count of church membership worldwide and half were from Texas.  The idea that heaven was populated by people who speak English with a slow drawl did not strike me as authentic.  The Church of Christ was started by Joseph Campbell in the early part of the 19th century but members of the church are taught not to believe that.  They believe their church has existed continuously and have an elaborate conjecture on how this could be.  By this time I had some experience with how people rationalize their worldviews in the face of conflicting evidence.

Humanism has its roots in classical Greek writings in Europe, the atheist Siddhartha Gautama in India, and the collective voices that have come to be known as Confucius in China.  The starting point of humanist thought is almost axiomatic in modern society – that reality exists outside of our subjective understandings and humans have the cognitive abilities to gain a clearer understanding of that reality.  An alternative view, and one that the held sway during the Dark Ages in Europe, was that reality is unknowable except as may be provided through divine revelation.  Freud chaffed at the latter suggestion, and in particular, the Cartesian dualism that set back the scientific study of psychology by as much as two hundred years.  You will recall that Rene Descartes reached an understanding with the Catholic Church that the natural world may be studied scientifically but the mind or soul could not because it was of God.

You’ve been teaching the History of Psychotherapy at AU.  How does psychotherapy provide a lens into the human mind and our motivations?

Psychotherapy is, of course, applied psychology and it has been subdivided into hundreds of schools each resembling sects in a world religion.  In recent decades, however, psychotherapists are increasingly describing themselves as eclectic as they borrow from various traditions.  This is possible because these schools share common basic understandings such as each person is a unique individual who is nonetheless part of a social system.  All psychotherapies believe in the interrelatedness of emotion, thought, and behaviour.  Interventions at one level are understood as holistically affecting the entire person.  Interventions using appropriate verbal and non-verbal communication, community resources and the client’s natural support systems, building a supportive client-counsellor relationship, and the co-construction of goals and interventions are common across schools of psychotherapy.

In my own work, I have mapped the selves of individuals from both individualist and collectivist cultures noting similarities.  I believe the modern self with qualities we now associate with mind such as the capacity to form objective beliefs and internally consistent thought, were the product of cultural evolution prior to the Axial Age.  I have published on the idea that the concept of mind is tied to our self-definition as a rational species and that the project of psychotherapy is to teach our clients to exercise these qualities of mind in their personal lives.

And a few questions just for fun, if you could have a meal with one person in history, who would it be? What would the meal be?

George Catlin.  He was an artist who partnered with a Plains Cree woman in the early 19th century and described the Cree as “A nation of atheists.” I suspect we could have a good conversation on this topic.  The meal would be bison, wild rice and Saskatoon berries.

What is the one thing in life to never forget on a road trip?

In northern Saskatchewan, where I am from, an extra spare tire.  Seriously, the roads up here are that bad especially during spring “break-up” and fall “freeze-up (the northern Bush Cree incorporated freeze-up and break-up as separate seasons for a total of six).  More generally, I would say take your sense of humour.  Why? Because the unexpected can and will happen and appropriate humour helps to put things in perspective.

If you could do it all over again, what would you be?

I think I would like to come back as a sentient Douglas fir living in a protected area on the west coast.  Why? They live a long time and I have a curiosity over what comes next.  Of course I would want all my memories and the power of observation.  The internet would be nice.

With respect to living my life over, I think we would all make different decisions; however, those decisions would only be possible if we carried with us the wisdom and knowledge we have developed to date.  In my case, I was driven by an undisciplined curiosity that led me in different directions.  I am tempted to say if I had it to do over I would have gotten a PhD.  before I was in my fifties; however, then I would have had to eliminate some of the choices I made tangential to this goal.  How would I have known to eliminate that which I had not first experienced?