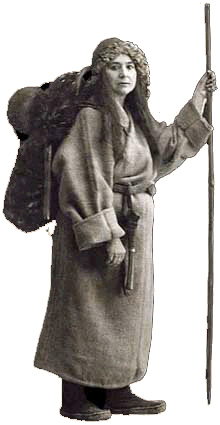 Alexandra David-Neel was an explorer and author who studied Buddhism and other Eastern religions extensively and brought their teachings back to the Western world.  In 1924 she was the first Western woman to visit Lhasa.  Lhasa is the center of Tibetan Buddhism.  One of the highest cities in the world, it has been the religious capital of Tibet since the 17th century.  David-Neel wrote over 30 books on Eastern religions along with her extensive travels.  Her writing influenced many writers including American poet, Allen Ginsberg, and Jack Kerouac, a novelist, who were both prominent figures during the 1950’s Beat Generation.

Following is an excerpt from a letter written on January 15, 1917, from Alexandra David-Neel to her husband, while on a trip to  Singapore:

“I am invited to Buddhist monasteries where the rule of silence is said to
be austere.  It’s a start! But it is not enough for the ears to be at peace:
the eyes must also be at rest, they must escape the whirling of beings,
jigging about awkwardly, spoiling the serenity of landscapes, soiling the
earth and sky with their industries, their factory smoke, destroying all
beauty by making «useful» things.  It is so beautiful, a river flowing as it
can, clearing its way alone, and unpruned trees, unmanaged plants that
live their natural life of struggle, defeat and triumph among their fellows
and mountains that are not transformed into shelves to support hotels or
pedestals for lighthouses or wireless telegraph systems!”

Alexandra David-Neel was born in Sainte-Mande, a suburb of Paris, on October 24, 1868.  She claimed to have been plagued by a desire to travel from an early age, and her parents found it difficult to even keep her contained in the backyard.  By the age of 18 she had travelled on her own to England, Spain, and Switzerland.  She became involved in the study of Theosophy, a religious movement founded by Russian emigrant, Helena Blavatsky that mainly includes the study of Asian religions.  David-Neel joined many secret societies and was sought after by various feminist and anarchist groups, which piqued her interest.  In 1899 she composed an anarchist treatise, but publishers refused to publish it.

In her diary, which was published in 1986, David-Neel wrote that she converted to Buddhism in 1899.  At the age of 23 she travelled to India where she studied Sanskrit and became interested in yoga.  Eventually she returned to Belgium where her family lived and began to study music and became a professional opera singer.  During her tours as an opera singer she met and married millionaire Philip Neel.  After seven years of marriage David-Neel and her husband separated and she returned to India where she lived for 14 years.  She learned the Tibetan language and studied extensively under the leadership of a Buddhist monk, even living in a cave for two years.  In 1913 David-Neel met with the 13th Dalai Lama in Kalimpong and received his blessing.  Her life consisted of extensive travels to all parts of the world and she continued writing until her death in 1969 at the age of 100.

Addition information about this interesting woman can be found at the following websites:
https://www.alexandra-david-neel.fr/home-page/909-2/
http://www.faena.com/aleph/articles/alexandra-david-neel-the-extraordinary-experience-of-a-spiritual-traveler/
https://en.wikipedia.org/wiki/Theosophy_(Blavatskian)