Columns
The Voice
The Mindful Bard—The Ballad of Buster Scruggs 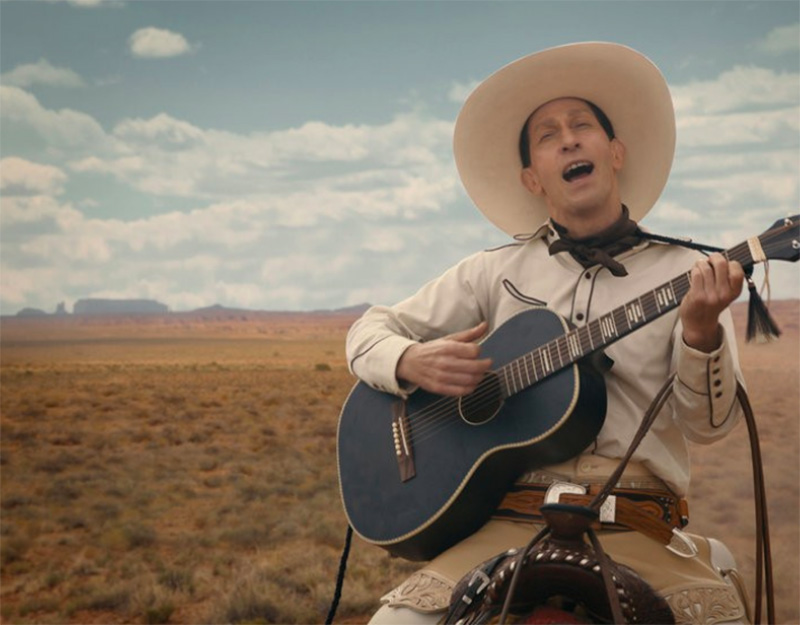 Film:  The Ballad of Buster Scruggs

It would be too easy to claim this film as an indictment of the United States alone, but its historical setting predates any solid sense of Canadian identity.  The characters, like my parents and great grandparents, freely moved back and forth across the border, with a freedom we can now only wistfully imagine and without a sense of having moved from one political ideology to another.

For the most part the cowboy, the pioneer, the prospector, the gunfighter, and the travelling actor didn’t see themselves as belonging to any nation aside from the wild, unsettled west where they could exercise the most rugged of rugged individualisms.  Using these archetypes, the Coen brothers present the human condition as well as the flaws in the descendants of North America’s European settlers in a form we can all immediately grasp.

The Ballad of Buster Scruggs is comprised of a series of six separate anecdotes, unrelated except for a common thread: the contest with our mortality and what it reveals about us.  The film employs the familiar but effective device of beginning each tale with the opening of an old book, showing us first a sheet of rice paper and then a beautiful watercolour illustration with a cryptic caption—one we’ll only understand once the story ends.

The whiff-of-the-absurd that permeates the film is established in the first scene when Tim Blake Nelson, as gunfighter Buster Scruggs, wanders through a stony canyon, his horse ambling along unreined as its rider plays a guitar and sings “Cool Water,” the classic thirsty-cowboy ode to a mirage.  Buster Scruggs represents a host of old cowboy acts like those of Roy Rogers, Hank Snow, and Gene Autry.  His first stop is a wretched tavern (every hero’s journey has one) in the middle of nowhere, no roads leading to it and no horses tied outside.  Realism this is not.

Scruggs teaches us that those who live by the gun, though they be the sharpest guns in the west, will die by the gun.  You’d think we’d know that by now, but apparently it bears repeating.

“The Girl Who Got Rattled,” based on a story by Stewart Edward White, tells the story of the beauty of the glorious hope that keeps springing up despite one disastrous event after another, and how blind fear can bring down that hope in a second.

In “Meal Ticket” we’re brutally reminded of how our cultures are founded on high ideals and values that we continually fail to embrace.  The gumption to pull ourselves up by the bootstraps becomes less admirable when we exploit and abandon the things in life that are beautiful but not useful.  We trash beauty in our pursuit of wealth, and, given a choice between high art and cheap entertainment, the lowest denominator is what gets our money.

The vignette “All Gold Canyon” is based on a short story by Jack London.  An aged prospector wanders into a valley untouched by human hands and proceeds to hack up the virginal landscape in search of gold.  The perfectly cast Tom Waits plays a role that seems to have been written for him, and his performance is historic.

“All Gold Canyon” is one instance of sitting back and watching others do all the work before throwing them to the curb and reaping what they sowed.  Will this come back on us? It certainly should.  But there’s a caveat: A respect for life and beauty may somehow bring justice and delay demise.  The old prospector steals an owl’s eggs for his breakfast, but seeing the owl eyeing him puts three back and keeps one, telling himself that birds can’t count.  This simple kindness, coupled as it is with his own need to survive, grants him a miracle later on.

Naturally we hear “Streets of Laredo” early in the film.  At the end a stagecoach passenger, the assistant of a “bounty hunter” (entirely symbolic of a darker and more primal vocation) sings the same tune but in the much older Irish song from which it originated, “The Unfortunate Rake,” in which a man’s death results from gambling his health with ladies of the night:

Kudos to the Coens for the songs they chose to include: Most of the ditties in the soundtrack predate the rise of commercially recorded “country and western” music whose purpose was to evoke nostalgia for the cowboy days with all their hardship, hidden blessings, and existential courage.

The Ballad of Buster Scruggs manifests five of the Mindful Bard’s criteria for films well worth seeing:

In Conversation With . . . The Spinney Brothers