Columns
The Voice
Fly on the Wall—Entitlement Through the Ages

‘Entitlement: Old as the Hills’ etc

Nobody wants to be called entitled, even if it’s true.  As university students we’re at risk of becoming branded with this pejorative term regardless of our age; protesting our innocence may seem of no avail.  After all, only an entitled person would complain that the label was unfair!  And hey, life’s unfair, right? Like the torture method of looping described by the Mannville, AB sociologist Erving Goffman, where compliance itself is taken as a sign of resistance and punished accordingly by the aggressor. There may be no way out of how others choose to ghettoize us (Kim Ser, online).

Looping works as follows: “A ‘permissive’ atmosphere is felt to encourage the inmate to ‘project; or ‘act out’…Through the process of looping, the inmate’s reaction to his own situation is collapsed back into this situation itself, and he is not allowed to retain the usual segregation of the these phases of action” (Goffman, 37).  In other words, if we admit to our privilege and show appreciation for it, we are saddled with a negative stigma.  Guilty as charged!  Like a kangaroo court, any admission of privilege or comment of gratitude may be taken as a sign of entitlement and looped back onto us so that we feel guilty for what we have and, ontologically speaking, for the essence of who we are.  There’s no escape, it seems.  No egress, that is, until we examine the history of the matter of entitlement more deeply.

We could just accept our status as denizens of a supposedly spoiled category of university students.  Or, we could provide ourselves some perspective; we at AU are far from a homogenous Millennial group, we’re a mix of all ages and backgrounds.  Because our student body runs the gamut, what entitlement we may possess transcends time and place.  Our education is rootless and protean; it transcends cultural boundaries and terminologies compared to the rooted nature of brick and mortar schooling.  And anyway, what is entitlement really?

Let’s consider the context of the epithet entitled.  Know thy enemy, as they say.

Urban Dictionary states that an entitled person is: “someone who thinks something is owed to them by life in general; or because they are who they are” (UrbanDictionary, online).  Goffman notes that “It is strange that today, when an individual can get almost everything else off his back, there remains the cross of personal character, the one he bears, albeit lightly, when he is in the presence of others” (Goffman, P.  37).  It stings to be called entitled, but that doesn’t mean it’s true.

To succeed at AU, we diligently adopt our own schedule amid hectic lives; we must work hard and consistently to prioritize our studies.  To be a distance student is to perpetually ask oneself “have I done my homework?” Sounds pretty responsible to me.  However, others might hear that we’re students in, say, the social sciences, and assume that we just sit around reading blogs and complaining about current events.  After all, high school social studies is, and was, about an easy an A as you can get.  And anyway, “what are you gonna do with that degree?”  If we have a job already why not work harder and seek a promotion, or, if we’re looking for a career shift, why not just take some re-training or polish up that magic wand of success manifestation: the resume.  To some observers, the privilege of restarting our post-secondary education may smack of the same privilege received by 18 year-olds as they ship out to a big glorious campus in a land far, far, away.

Normally, let’s be honest, the label entitled is affixed to folks who post birthdays in the last quarter century.  Millenials.  From this seeming fact one might conclude that previous generations were more respectful of their elders and circumspect about the voicing of any criticisms lest they bite the hand that feeds.  As the phrase goes, let’s unpack this belief a bit.

Summer of Love, Summer of Entitlement?

Imagine my surprise when, watching a classic Hollywood movie from 1967: Guess Who’s Coming to Dinner, I was faced at the climax was this monologue spoken by a son to his father:

“You listen to me.  You say you don’t want to tell me how to live my life.  So what do you think you’ve been doing? You tell me what rights I’ve got or haven’t got, and what I owe to you for what you’ve done for me.  Let me tell you something.  I owe you nothing! If you carried that bag a million miles, you did what you’re supposed to do! Because you brought me into this world.  And from that day you owed me everything you could ever do for me like I will owe my son if I ever have another.  But you don’t own me! You can’t tell me when or where I’m out of line, or try to get me to live my life according to your rules.  You don’t even know what I am, Dad, you don’t know who I am.  You don’t know how I feel, what I think.  And if I tried to explain it the rest of your life you will never understand.  You are 30 years older than I am.  You and your whole lousy generation believes the way it was for you is the way it’s got to be.  And not until your whole generation has lain down and died will the dead weight of you be off our backs! You understand, you’ve got to get off my back!” (Rose, online).

Not Until Your Whole Generation Has Lain Down and Died

This angry son wasn’t some raging millennial but Sidney Poitier’s character reaming out his own father.  In the movie, a liberal-minded white couple see the crows of their tolerance come home to roost when their daughter brings home a white-collar black man as her fiancé.  Shortly, amidst quirky calamities ranging from botched ice cream tastings to arguments over fender benders, Poitier’s character comes face to face with his own father.  His Dad, a lifelong postal clerk who had saved and scrimped to the point that Poitier’s mother even did without a good winter coat, is made to endure this assault.  Supposedly there was no chance Father would understand Son, nor did his son feel gratitude or loyalty after having his education and career opportunities paid for.

The fact that Hollywood of the era found this a normal and expected response by a young man speaks volumes of the cultural climate of the 60s; youth weren’t denigrated as snowflakes, they were encouraged to tell off their elders.  Something was in the air, all right.  At this climactic moment Poitier, the viewer can only assume, speaks for broad segments of Hollywood and an entire generation of baby boomers and incipient world leaders.  Out with the old and with a shovel!  Is this not the ultimate expression of entitlement, arrogance, and selfishness?  Has a movie of the 21st century approached the vitriol Poitier’s character hurls at his parents?  (Please write the Fly on the Wall c/o Voice Magazine if you’ve seen such a film!)

And that’s not all, at the same time as this movie was storming cinemas during the supposed decade of love and peace and flowers, the Who were singing gleeful lines like “I hope I die before I get old,” and “Why don’t you all just fade away” (Green Day, online).  Their classic song ”My Generation” is just one minnow in a streaming cultural inundation.  In my case, Green Day’s cover was the first version of “My Generation” I heard, on their 1991 album Kerplunk.  Thus, rebellion seems embedded in the nature of youth.  And meanwhile, during the demographic intermundia when Generation X were in their teens, the classic punk band the Dead Kennedys sang:

“I would rather stay a child/And keep my self-respect/If being an adult/Means being like you” (Dead Kennedys, online).

Earning our Stripes as Rugged Individualists

Disagreeing with one’s teachers, parents, and elders clearly transcends generations.  Everyone was entitled at some point to some extent.  What doesn’t break this time-space barrier, however, is the value of education which we at AU are privileged to receive.  It’s not easy studying in a corner, a closet, a laundry room, or perhaps even a woodshed while peers and family suspect we are just avoiding them.  Even the most understanding of loved ones note our relative absence during our departure into the murky netherworld of online higher learning.

And as for ourselves, at the risk of making this all about us and failing the first “am I entitled” meme-ocracy test, AU studies are hard.  Whiney-hard, take a stress leave hard, hard like writing a novel while under lock and key in solitary confinement.  The Shining has nothing on AU deadlines, but it’s all worth it!  Unlike showing up at work and screwing the pooch all day, or working at the craft of looking industrious, it’s possible to fail a test or botch an essay and have no one to blame but ourselves! And that’s the existential joy of it.  At AU the buck stops with us.

But wait, there’s more: skipping is tantalizingly easy with no classroom to show up at; Ferris Bueller’s Day Off would be the story of our lives if we didn’t intermittently play taskmaster and crack the whip upon on our own backs.  Having said that, little is more gratifying than to complete a course and realize that it was us alone who were the predominant alpha and omega of our academic motivation and success.  Us alone, and whomever raised us to be intelligent students and aided our education along the way, and to whom we feel gratitude.  After all, somebody clothed us and made sure we went to school in our younger years, right?  We were trained for this mission!

If we were really entitled, we’d ignore our own history and its benefits we’ve reaped.  Little wisdom can surpass the sense of reaching a higher plane of intellectual existence such that any look over our shoulder is a soul-shuddering vertiginous gaze down, down, down, like Jack from his beanstalk.  Jack disobeyed his elders, distrusted their wisdom, and look at the trouble he got into! So let’s stay grounded at AU; we’ve earned our success and our perspective, but our lives and loved ones are the ones who nurtured us so we could thrive! 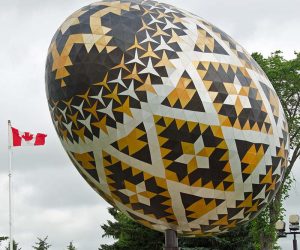 Fly on the Wall—Entitlement Through the Ages

Fly on the Wall—