Articles
The Voice
Excerpts from The Expeditious Vindicator, 1901

While visiting my brother in Whitefield, New Hampshire in 2013 I took the opportunity to browse the attic of his 150-year-old home.  There I found a box filled with yellowed copies of a newspaper whose cover was boldly emblazoned: The Expeditious Vindicator: Lofty Thoughts And High Ideals For a Brighter Tomorrow In Coös County.  The articles were so fascinating and well-written that I soon myself lost in them, and after several hours I felt quite steeped in the culture of Edwardian New England — and reluctant to escape it.

In 2017 a fire destroyed, among other valued goods, the contents of the attic.  I was glad I’d taken away a few copies of the paper but deeply regretted not having fetched away the entire box.  I’ve copied out here, for your reading pleasure, a few excerpts from a late summer edition of 1901. 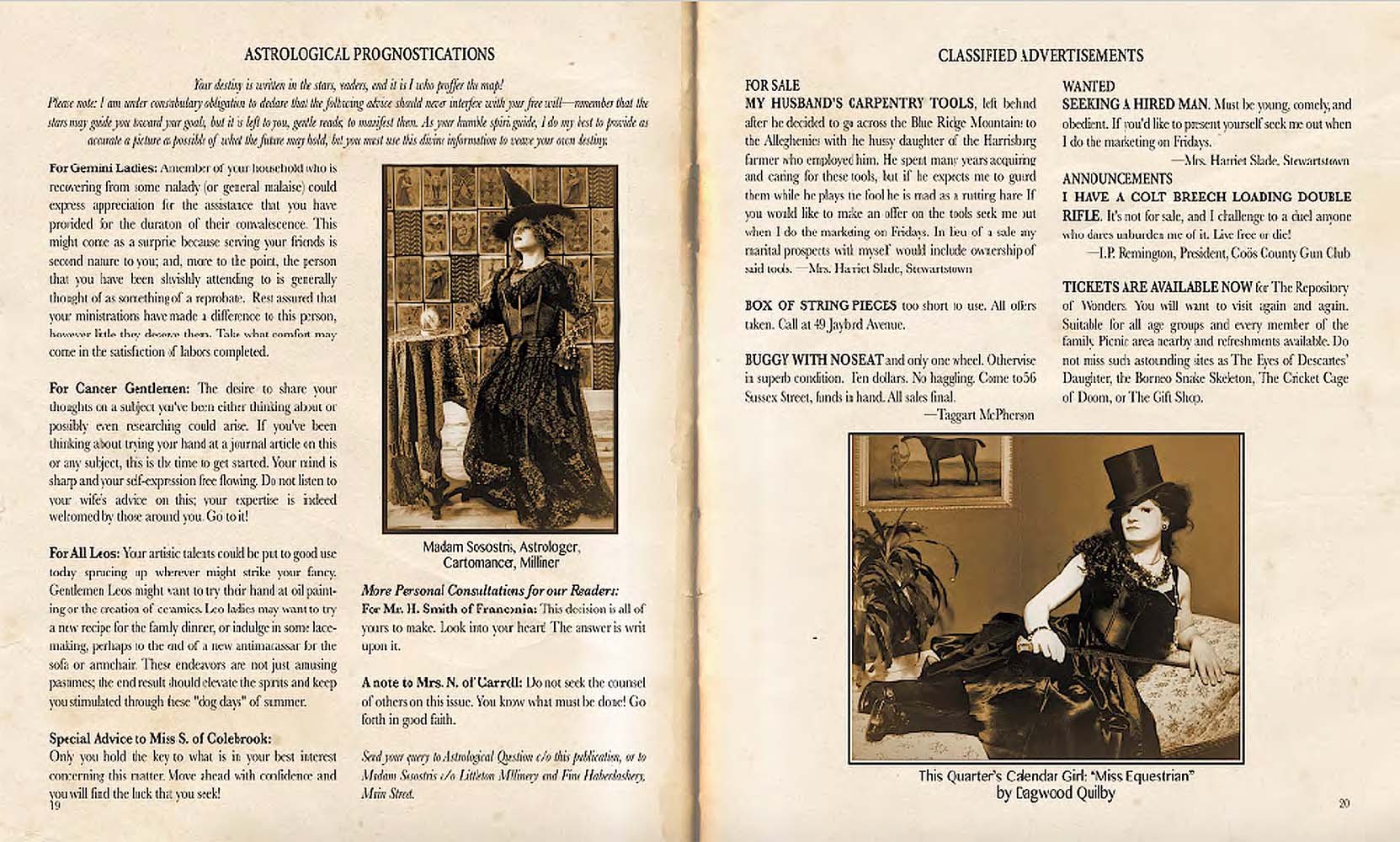 Errol, Coös County, August 2, 1901— Shortly after midnight police were summoned to a brawl on the lawns of “The Manse,” a boarding house drolly named for its jarring contrast to a typical preacher’s home.  A resident couple known for frequent and noisy squabbles had awoken a sufficient number of neighbors to arouse complaints.

The police arrived to find both Maggie and Big Feller Ainsworth two sheets to the wind and swinging at each other, the first with an iron ladle and the second with a shoehorn.  The police intervened and posthaste elected to arrest the male in the hopes that the fairer sex would then retire quietly.  When they had finally succeeded in clamping the irons onto Big Feller’s wrists (drawing forth first the filthiest of curses and then the most pitiable of moans) a sympathetic chum from the Manse shouted from a third storey window, “Lie down, Big Feller! Lie down!”

Big Feller brightened up immediately and threw himself to the ground.  Six and a half feet tall and weighing well over 400 pounds, it was impossible for the police to lift him, and so it was necessary to load him onto the wagon as one would drag a recalcitrant steer, by means of ropes and pulleys.

As they were taking him away Maggie Ainsworth, a tear rolling down one cheek, was heard to remark, “He never left a mark on me, and ’twas always I who threw the first punch!”

Pizzle rotgut was believed to have been involved.

My husband’s carpentry tools, left behind after he decided to go across the Blue Ridge Mountains to the Alleghenies with the hussy daughter of the Harrisburg farmer who employed him.  He spent many years acquiring and caring for these tools, but if he expects me to guard them while he plays the fool he is mad as a rutting hare.  If you would like to make an offer on the tools seek me out when I do the marketing on Fridays.  In lieu of a sale any marital prospects with myself would include ownership of said tools.  —Mrs.  Harriet Slade, Stewartstown

Box of string pieces too short to use.  All offers taken.  Call at 49 Jaybird Avenue.

Buggy with no seat and only one wheel.  Otherwise in superb condition.  Ten Dollars.  No haggling.  Come to 56 Sussex Street, funds in hand.  All sales final.

Seeking a hired man.  Must be young, comely, and obedient.  If you’d like to present yourself seek me out when I do the marketing on Fridays.  —Mrs.  Harriet Slade, Stewartstown

I have a Colt breech loading double rifle.  It’s not for sale, and I challenge to a duel anyone who dares unburden me of it.  Live free or die! —I.P.  Remington, President, Coös County Gun Club

In keeping to the tradition of unearthing the unknown and holding it up to the gaslight with a magnifying glass, we bring you these nuggets of obscured epiphany.  Enjoy with a cup of chamomile tea and a vinegar tart.

Poets have been mysteriously silent on the subject of cheese.         ~G.  K.  Chesterton

(Aside from the 2013 visit and the 2017 house fire everything here is made up out of whole cloth.  Happy April Fool’s Day! ~WW)