Articles
The Voice
Why Zombies? 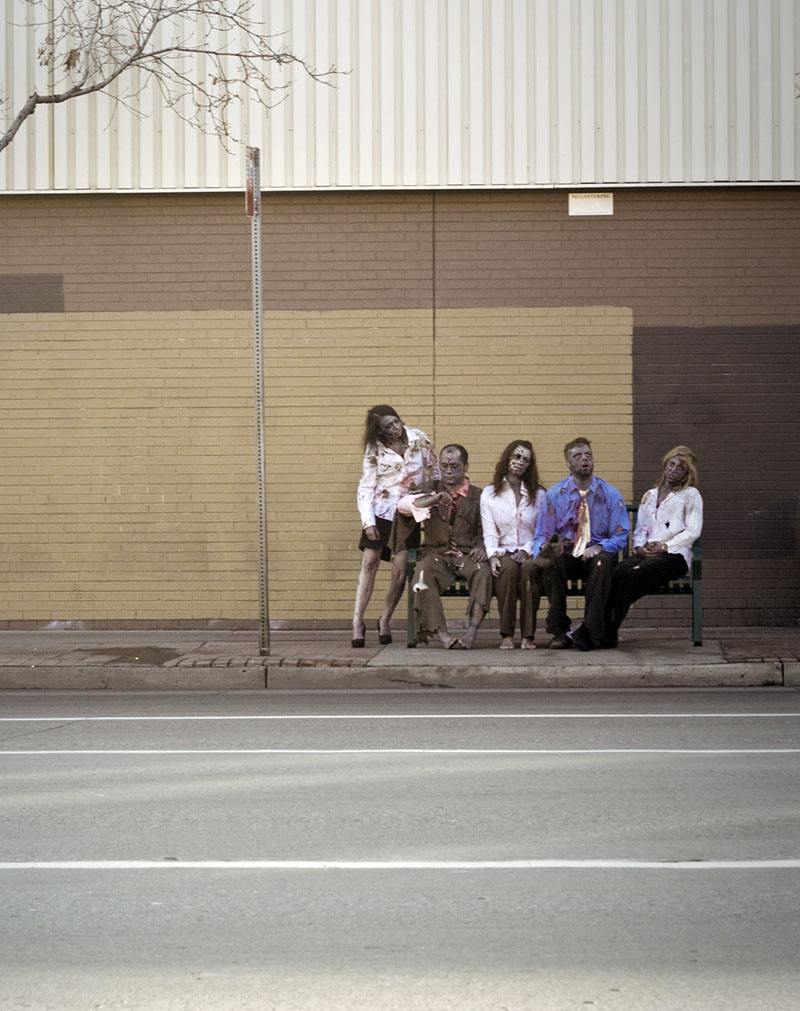 “Zombie stories are by nature dystopian.  Zombies signify failure–of political will and social cohesion, of technology and medicine, of the human body and soul.”
– Elly Blue

Having been born in the last two weeks of the baby boom, I was finding myself increasingly flummoxed by my adult Gen X brother’s obsession with zombie films and television series.  I didn’t get it; you could practically smell those rotting husks of humanity lurching through whatever landscape, urban, rural, underground, or what-have-you in a raging lust for the taste of living human brains.  The images alone made me want to toss my brunch, and yet there were all my brother’s cohorts sitting entranced before them, often munching popcorn.

So one day I asked, “Why is it that your generation is so fascinated with zombies?”

As usual my brother hemmed and hawed while his clever wife provided a ready answer: “Because we are zombies.”

We’ve Found the Zombies, and They are Us

I’ve been turning this statement over in my mind for years, and its meaning is finally becoming clear.

The word “zombie” is said to have originated in Haiti (“zonbi” in Haitian Creole), where visitors observed dull, plodding shoe-gazers shuffling out to the fields to work.  When the master was asked about them he said they were “zombie slaves,” that is, dead people who’d been magically brought back to a semblance of life so that they could be exploited as free labour.

(We see this kind of thing today when a drug addict is no longer able to pay their dealer even after they’ve sold all their furniture, and so the dealer puts them to work in return for a continued supply, or when people who can no longer afford the internet are obliged to sit in wi-fi hotspots all day in order to feed their addiction to social media.  But back to the mythology.)

On closer examination it turned out that the so-called “zombies” were mentally ill, brain-damaged by drugs, or being drugged regularly, and in the last case observers couldn’t say if they’d begun their zombie sojourn as addicts kept supplied by masters or if they’d been captured and then drugged to ensure their compliance.  It was probably some of both.

From Field Hands to Brain-eaters

This is the historical origin of the zombie archetype, but how it morphed from there has more to do with the state of third millennial pop culture in the West than it has to do with labour injustices in Haiti.  On the screen the zombie quickly moved from a shuffling field hand to a monster that arises from the grave, or from wherever it was slain, mindless, decaying, and driven by a raging hunger for human flesh.  As the archetype developed zombies slowly manifested a predilection for human brains.

Movies have explored this myth ad nauseum.  Why? Because that’s what the movies do: They help us negotiate change to figure out how we ought to think and feel about it.

So what new reality do zombie films and shows help us navigate? I think my sister-in-law hit the nail on the head, but let me elaborate.  Zombies have been drugged.  They’ve been drugged by video games, music, images, and moving pictures whose production and place in our lives began going haywire somewhere in the eighties and has been going more and more nuts ever since.

It’s no surprise that Steve Jobs didn’t allow smart devices in the house while raising children; he’d seen the danger writ large.  Meanwhile the youth of the West were becoming the 24-7 slaves of entertainment technology, and where that failed the growing street drug market was poised and ready to numb whatever consciousness remained.

Hence the brain-eating aspect of the zombie, which wasn’t part of the myth’s origins but rather developed with the horror movie genre.  Zombies crave consciousness.  When anyone from Generation X on watches zombies on the screen they’re watching themselves.  Their sympathy is in small part with the zombies, which is why once in a while you see zombies portrayed sympathetically, with the living trying to reform them, befriend them, give them the break they need.

What do the undead really want?

The “undead” crave awareness.  Knowing.  This is why they want to eat our brains, but only occasionally does eating a brain result in consciousness for a zombie, as it did in Warm Bodies.  This is how far civilization, or at least some of it, has fallen into decline.  Many of those born after 1960 could have, like Steve Jobs, put strict limits on their consumption of mind-altering substances and entertainment.  But there comes a point when it’s almost too late, when the healthy human urge for awareness becomes subverted into a terrifying bloodlust.

Kids, don’t let this happen to you.  Wake up, tune in, and put limits on everything that has the power to blind you, even a little, to what is.