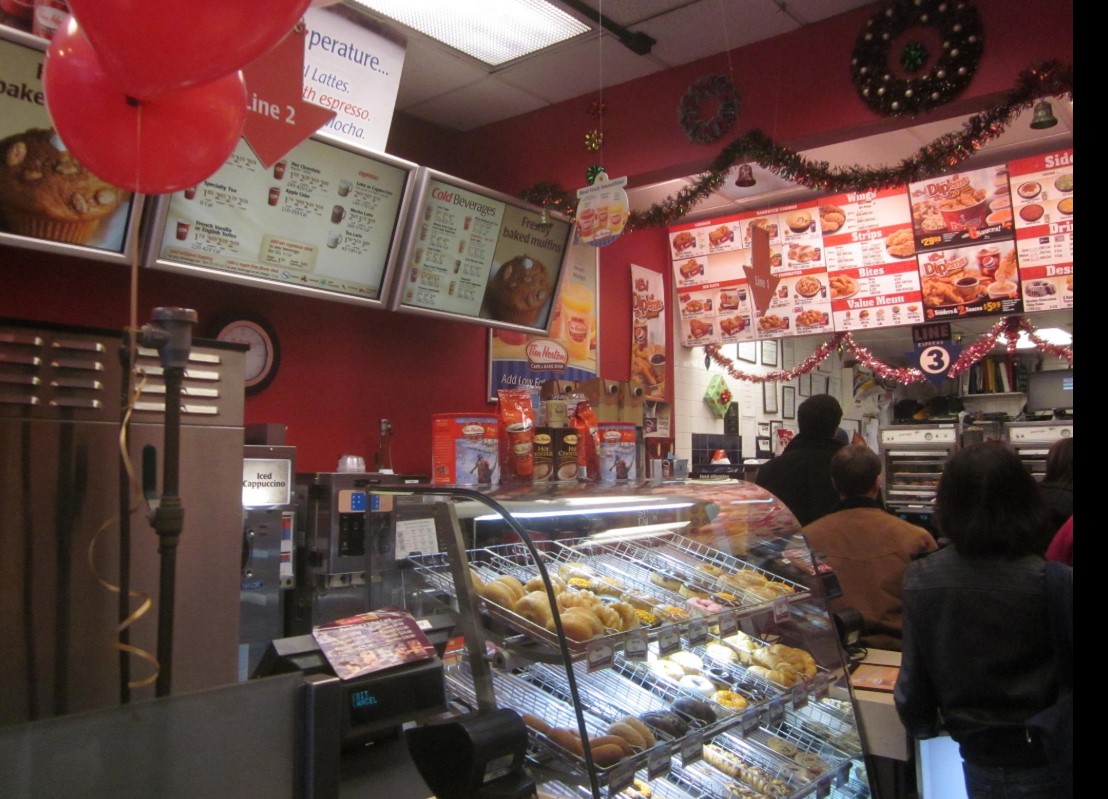 For many, Tim Hortons brand represents Canadian identity almost as well as our hockey fanaticism and our cravings for the iconic maple syrup. Halfway across the world, I came across a rare find – a Tim Hortons Cafe in the middle of a bustling street in Shanghai, China. I was also feeling slightly homesick and the discovery brightened my day. Taking a stroll inside the lounge I realized that this was quite unlike any other Tim Hortons that we’re familiar with in North America. But, before I start, I’d like to make a disclaimer that I am not affiliated or sponsored by Tim Hortons in any way. 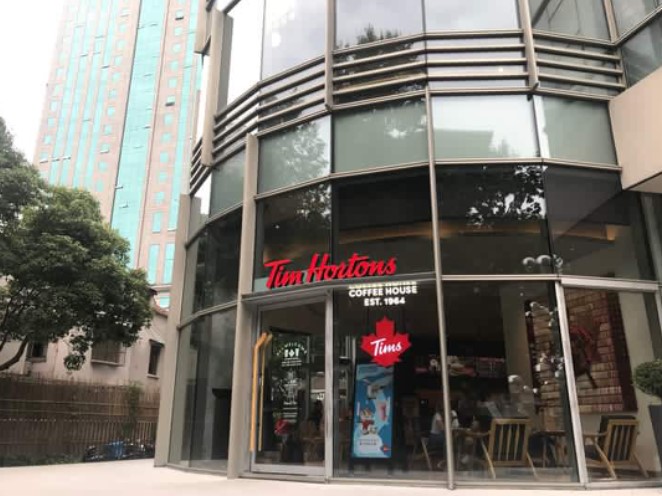 For one, the lounge was well-lit, cozy and even up-scale. The interior decor was symbolically Canadian with a large maple leaf artwork, but some might say it had the aura of a Starbucks or a hipster cafe rather than your average Tim Hortons. Of course, it made sense that in a wealthier region of Shanghai, the Tim Hortons would appeal to the local population. The stereotypical Tim Hortons in Canada has a fast food feel that’s meant for a quick dine in or take-out. Very few people would spend hours in one, whereas for its Shanghai counterpart, it was inviting enough to sip premium coffee under a chandelier. 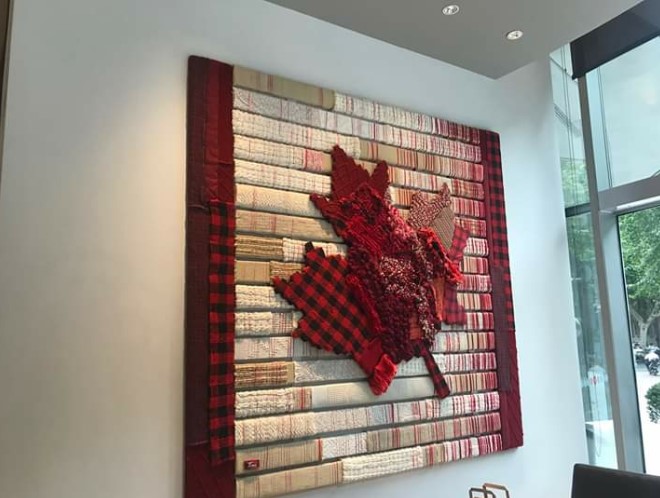 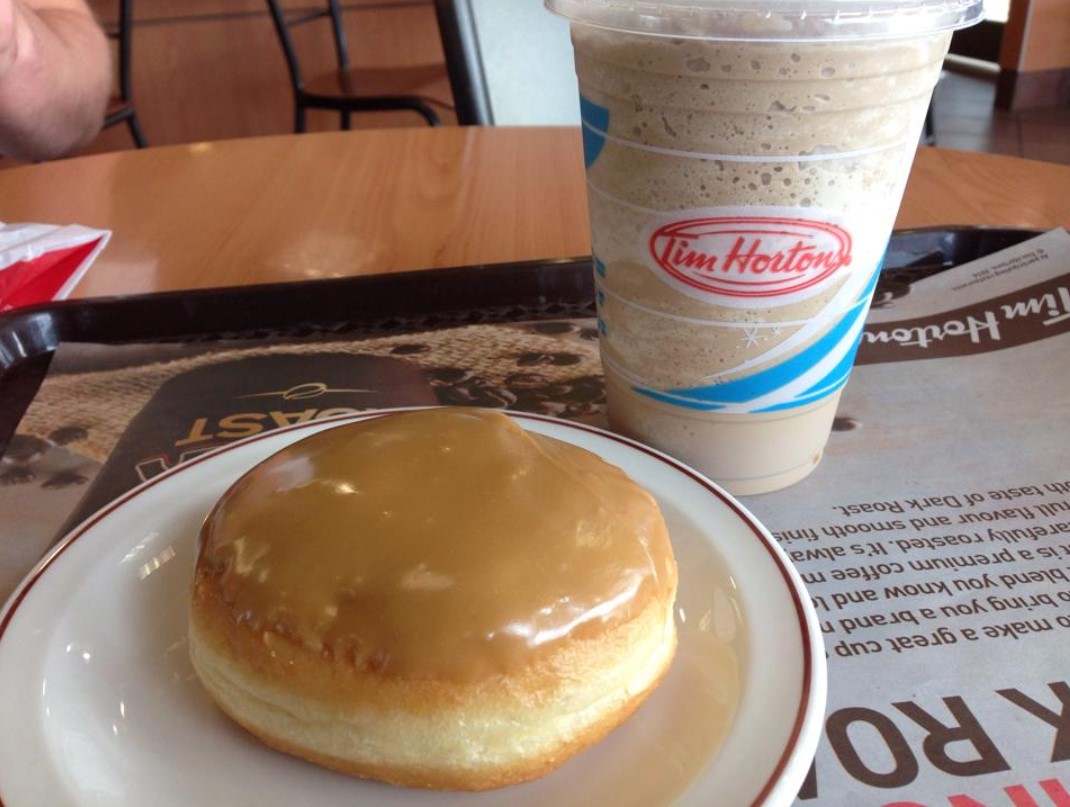 So let’s talk about the food. After touring the interior and finding a snug couch to laze about, I took a peek at the menu which consisted of both hot and cold beverages as well as food items. The menu was written on a chalkboard not unlike that of many premium cafes. Having the advantage of being bilingual I was able to navigate the menu of ciabatta sandwiches and exotic-sounding drinks. One thing that caught my eye was the flavor of the Timbits available. Some unique offerings included the salted egg yolk flavor and black lemon peach oolong tea. Moreover, the sandwich fillings included prawns and black pepper, beef quite unlike the typical BLT or grilled chicken available in Canada.

One of the things Canadians love about this brand is that not only is it convenient to grab a coffee or snacks at one of the many locations across Canada, but also because of the affordable prices. So how does Chinese Tim Hortons stack up with the western counterpart? I made a comparison chart of the most popular items on the menu. All the values are in Canadian currency and all taxes (Alberta’s) are included.

It was very obvious after stepping into the Shanghai Tim Hortons that this cafe wasn’t for everyone. Unlike in Canada where individuals from almost all types of backgrounds can enjoy a cup of coffee, that wasn’t the case here. In fact, some of the prices, even after converting to Canadian, were nearly double that of the Canadian menu prices. Hence, not many average Chinese people can afford a cup of coffee and doughnut here. 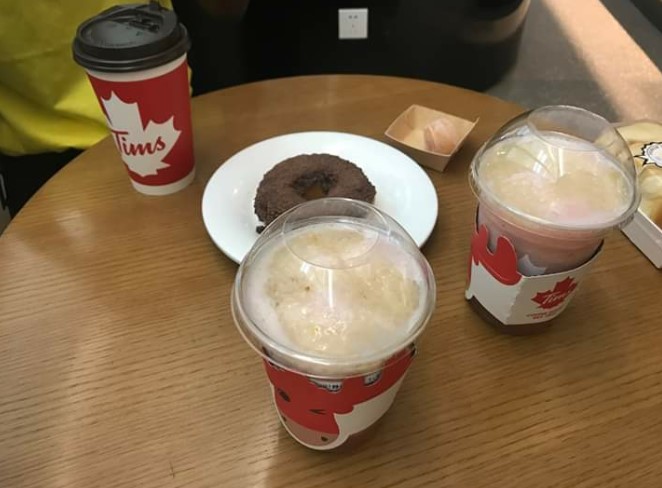 In Shanghai, I made an order of black forest doughnut, salted egg yolk Timbit and a peach fermented rice slushie drink 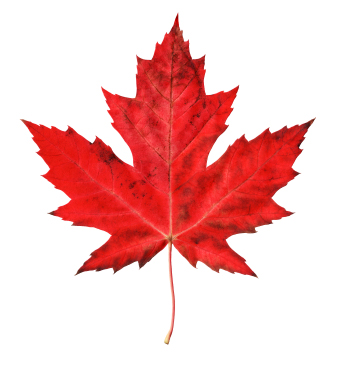