Like an enemy repeatedly coming back to life, the fact remains that even our best academic efforts are no guarantee of success.  Putting in the study time, like doing good works seeking heaven, may not guarantee us a happy ending.  And that’s scary! Scary too is the fact that learning itself is dependent upon approval from authority structures; sometimes the right answer depends on who you ask.

Martin Luther, by realizing the forces he unleashed by liberating people from the chains of an authoritative church, at some level anticipated the YouTube era where anyone without a textbook or assignment deadline can watch some online videos and pronounce themselves edumacated.

Friedrich Engels, in his assessment of the peasant uprising that followed Luther’s revolutionary pronouncements about the need for liberation from an authoritarian institution, wrote of how the dreams of the time almost became a nightmare for those with much to lose.  The peasants saw potential for great improvement in their lives at the expense of their wealthy masters.

“The lightning thrust by Luther caused a conflagration.  A movement started among the entire German people.  In his appeals against the clergy, in his preaching of Christian freedom, peasants and plebeians perceived the signal for insurrection.  Likewise, the moderate middle-class and a large section of the lower nobility joined him, and even princes were drawn into the torrent.  While the former believed the day had come in which to wreak vengeance upon all their oppressors, the latter only wished to break the power of the clergy, the dependence upon Rome, the Catholic hierarchy, and to enrich themselves through the confiscation of church property.  The parties became separated from each other, and each found a different spokesman.  Luther had to choose between the two.  Luther, the protégé of the Elector of Saxony, the respected professor of Wittenberg who had become powerful and famous overnight, the great man who was surrounded by a coterie of servile creatures and flatterers, did not hesitate a moment.  He dropped the popular elements of the movement, and joined the train of the middle-class, the nobility and the princes.  Appeals to war of extermination against Rome were heard no more.  Luther was now preaching peaceful progress and passive resistance” (Engels, 1850)

AU allows us freedoms far surpassing those at a traditional university, and, yet, our schooling still requires deference to authority.  So much depends on our solitary selves as we forgo the brick and mortar security blanket.  But we don’t want to wall ourselves in like some horror movie victim.  That’d be an awful way for our academic dreams to die.

Reminding us to retain levity in the face of a leviathan, Desidirius Erasmus’ In Praise of Folly a half-millennia ago used irony to illustrate the foibles of earthly institutions.  “Wisdom commonly makes men scrupulous, which explains why these men are usually to be found in hunger, poverty, and smoke; they live unheeded and inglorious as hated men.  The fool on the other hand, seems to live in a profusion of wealth, and sometimes as the head of state” (Erasmus, 160).  Not a few college students live up to their stereotype as pseudo-academic clowns with little wisdom but much entitlement; at AU we don’t have to don that Hallowe’en mask, however.  Our academic setting enables the virtue of being our own classroom of one (or in grouped study a few more but only connected by invisible wire).  Erasmus would have appreciated our unmediated contact with coursework, I think, as he poked fun at the corruption and bias that circulates wherever humans abide in hierarchical social structures.

Erasmus was speaking theologically, but academically there are many parallels.  The simple belief that hard work will be rewarded is perhaps one of the greatest myths of brick and mortar schooling.  Even if we theoretically excel at a subject we must, in classrooms, learn to tow the line with our instructors and give answers expected of us of us.  This can retard our creativity and shackle our thoughts even as we receive good grades in a gilded scholarly cage.  Erasmus wrote of the ability of some folks to play the game without much critical thought: “Almost all Christians being wretchedly enslaved to blindness and ignorance, which the priests are so far from preventing or removing that they blacken the darkness and promote the delusion: wisely foreseeing that the people (like cows, which never give down their milk so well as when they are gently stroked), would part with less if they knew more…” (https://www.azquotes.com/quote/497953)  And AU education provides a beacon to our free-thinking and fearless minds.

Escaping the Labyrinth by Thinking Outside the Outside

Accepting our fate to be naturally more gifted in some disciplines than others can be like accepting that there will be nightmares; as adults they rarely trouble us the way they did as children.  The greatest nightmares, though, are, of course, ones that turn out to be real.  Displacing the sense that we must suffer with coursework beyond the scope of our capabilities is like fighting demons that are impossibly large and scathingly viscous.  Sometimes we just have to pinch ourselves to arrive at a place of scholarly serenity.  We all have talents and engaging with them will lead us to victories; there’s no dishonour in picking our battles.  School may not always be fun, but it ought not be torture!

The concept that all hard work will be rewarded is based on a logical assumption beyond which lie abysses and expanses in all directions.  Sometimes logic itself is the problem; Sometimes instead of our usual flashlight we may need to illuminate the truth differently; trying out some relevant material prior to taking a course is a great step.  It’s not bad to test our limits and we may be pleasantly surprised; after all, our own internal logic may limit our potential.  Questioning our preconceptions is a bit like enjoying Hallowe’en for all its camp.  We know ghosts and monsters are fiction, but don’t these untruths reveal new realities hitherto unthought?

Beyond the cozy comfort blanket of logic’s confines lie terrifying and intriguing possibilities.  Even Ockham’s razor, the axiom where the most obvious answer is probably correct, brings a certain creepy vivisection on reality.  Our academic abilities are many and our potential can surprise us; many a student, myself included, underestimates their abilities and especially (such as when fearing math like it were a swamp monster) when our fears define part of our identity.

But AU allows us to personalize our academic passion and give ourselves purpose in whatever way works for us.  We have limits but they too are limited in a reflexive way.  And that fact is unquestionable.  Like pinching oneself during a nightmare, we can, with lucidity, conquer any fear if we set realistic goals (less coursework done well is better than more time spent in half-hearted fashion) with realistic assessments of our true interests and inborn abilities.  Lipstick on a pig may be a hilarious Hallowe’en costume but if we really aren’t machinic mathletes, or erudite essayists, then no amount of hard work is going to yield the rewards we are hoping for.  Scary as it is, our lives are sometimes not our own.  Yet we need not be haunted by our shortcomings.  Once identified we can open our eyes from the nightmare of possible failure and see the bright and beautiful possibilities for success in reality.

Out of the Scary Woods And Towards the Castle of Success

We at AU know how much hard work goes into achieving our good grades.  Like Luther seeking the good graces of God without earthly human intervention, the fear of failure easily grows for us because we don’t have a safety net of fellow students and a student services office down the hall.  No comfort ponies for us, that’s for sure.  And no class picnics on sunny fall days either.  It’s just silent study at any hour of day or night.  Sometimes it can feel like a day of the dead if we wear ourselves out with our coursework; yet the sense of accomplishment, on our own time and as our own master, is unparalleled.  Like vanquishing any cyber or sidereal beast, success at AU means our dreams are coming true.

Fly on the Wall—Effort Without Reward? 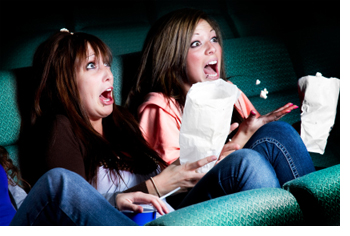 The Good Life – Put Some Mustard On It