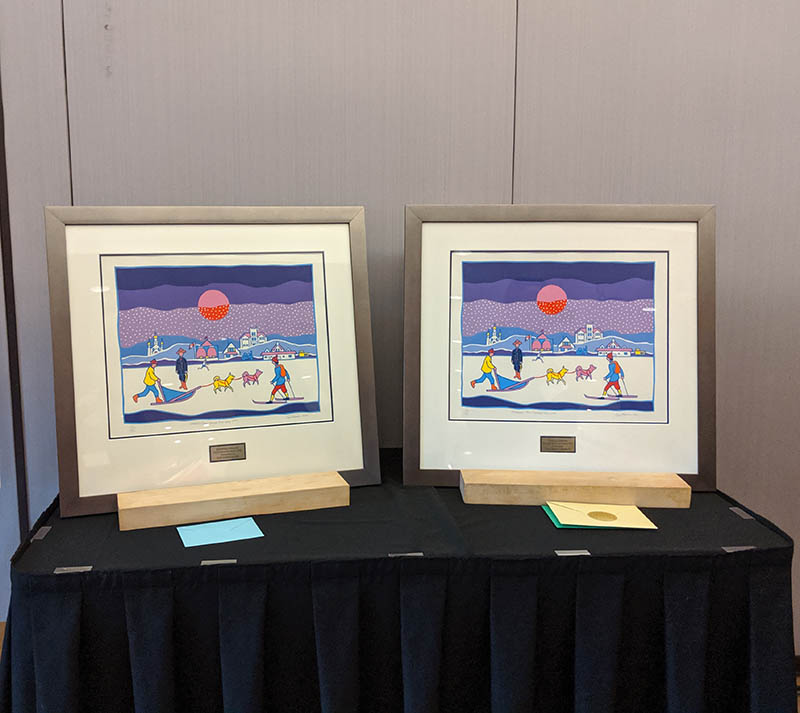 On Monday, October 21, while many people settled down in front of their televisions or with groups of fellow minded citizens to watch the results of the federal election roll in, a small group of AU staff and faculty, and an even smaller number of students, gathered in Fort Calgary to celebrate the AU Alumni Awards.

At this event, two awards were given, the Future Alumni award, honoring a person currently attending AU who it is felt would be making a significant difference in the world on their graduation, and the Distinguished Alumni Award, honoring an AU alumnus who embodies the AU experience and the positive effects that it can have on people.  Each award comes with a limited edition print representing the Athabasca region.

If you’ve never been to one of these and you get the opportunity, you really should go. And not just for the free drinks that are offered.  The event took place in an upstairs room at the Fort Calgary interpretive centre.  Walking in, we quickly got handed pre-printed name-tags from the many still left on the table. Each one came with two tickets for free alcoholic beverages, and we were reassured that non-alcoholic beverages were also available for free.  Having arrived about a half hour into the initial meet-and-greet of the event, it was a bit surprising to see how many name-cards were still on the table at the time, but many of those got taken up as we approached the official award ceremony. 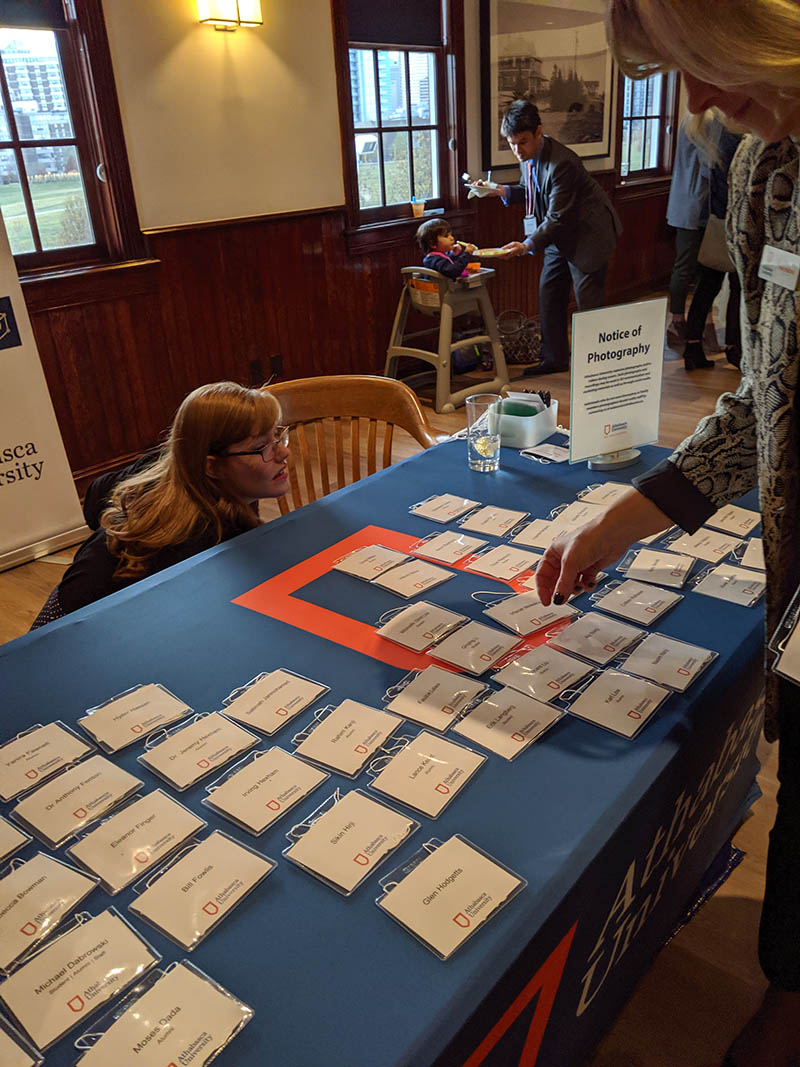 As we mingled, we were able to help ourselves to various small hors d’oeuvre that had been made available for the evening.  Both hot and cold were available, but the hot ones tended to get snapped up so quickly there wasn’t time to be able to get a good photo of them,  you  can even see  it  happening in the background of each of the pictures here.  You’ll just have to trust me that they were quite tasty.

And while this was welcome, the real reason for the evening came when the award winners were officially announced, and each asked to give a short speech.  Barb Tiedemann, the recipient of the Future Alumni Award gave a speech about her passion, developing mental health programs for young girls—giving us statistics along the way that pointed out the desperate need for this to happen, and how AU was helping to make her goals possible.  Her speech was well received by the crowd, even as she had to break a couple of times from the wealth of emotion brought forward by explaining her goals and the recognition of the award. To me, these breaks, where she frequently referred to a bet she had with one of her family members as to whether she’d cry or not while giving the speech, served to humanize her even as she inspired.

The second recipient, Esmail Bharwani was also an inspiring story-teller, but for him, the story was of a struggle from being unable to take even his high school education back in Tanzania, to eventually attaining an accounting degree and practice, gaining a Bachelor’s of Administration from AU, and going on to take and practice law.  He has been vigorously dedicated to his own learning, and to helping other students learn, for literally longer than I’ve been alive.

But simply hearing me tell you about how their stories and speeches are inspiring doesn’t hold a candle to hearing it yourself.  Fortunately, you can do that, as AU has recorded the event, and it’s absolutely something you should take some time to watch if you’re having any doubts about your own progress with AU.

My biggest complaint about the evening is that when it was just the crowds mingling, the noise in the room reached a volume that would rival many a bar, and made it difficult to hear even the person right beside you.  I didn’t even mind missing watching the election coverage, though I wonder if it might have made more sense for AU to have planned the night for when there wasn’t a federal election being announced.  My biggest complaint with the event as a whole is simply that AU does not seem to push these things strongly enough.  One of the detriments at AU is that it can be hard for student to develop a sense of identity and community about their university.  They should make extra efforts to ensure that events like these are not only well attended in person, but well publicized online, so that all students can share at least a little bit of the experience.