Articles
The Voice
The Zen of Sullivan’s Travels 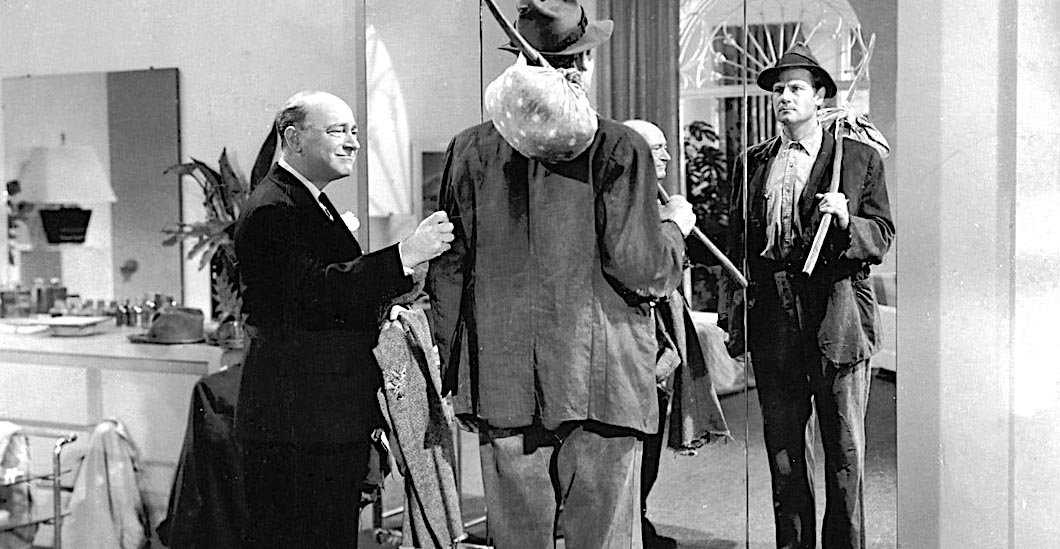 “There’s a lot to be said for making people laugh.  Did you know that’s all some people have? It isn’t much, but it’s better than nothing in this cockeyed caravan.”

It’s the earlier film that I’ll be talking about today, because it wasn’t only the Coen Brothers who saw in it a cinematic treatise on karma, dharma, maya, enlightenment, and salvation.  (Spoiler alert: You may want to watch the movie before you finish reading this article.)

John Sullivan has had a pampered and sheltered upbringing.  His high station, work ethic, and creative gifts have granted him access to the higher echelons of Hollywood’s film industry, wherein his very person is identified with valuable capital—a mind that can generate mountains of dough for a lot of people.  But his education has granted him a yearning for social justice, as well as a rather naïve love for the common man.

Sullivan wants to make films that dignify the poor yet feels ashamed that he himself has never suffered want.  He believes that for his new film project (O Brother, Where Art Thou?) to be authentic he must understand poverty first-hand.  His assistants try to talk him out of it, pointing out the danger of placing his inexperienced self in harm’s way as well as the fact that the poor prefer prosperity to being “understood.”

The historical setting looks like the year the film was made—1941.  The boys are still at war and the country is suffering the hangover of a long economic downturn, one that has allowed a large and manifold culture to grow up around the hobo life.

Sullivan is smart enough to know he needs awakening but not quite smart enough to know a tiger can’t change its stripes.  He’s certain that to be truly awake he must experience hardship firsthand (he’s wrong, but he achieves enlightenment anyway).  Despite his best efforts Sullivan keeps getting bounced back to Hollywood, or else his crew shows up to rescue him.  Karma can be a bitch, but it can also save our butts.

A reversal of Sullivan’s good karma appears in the form of a hobo who wants to be rich and pays for his hubris with his own life.  There are penalties for trying to hand back the cards life has dealt you, and this turns out to be just as true for Sullivan as for the dead hobo.

How to really help the poor

Our hero discovers that the poor are the best at delivering themselves from their own misfortunes because they’re in the best position to understand each other’s true needs.  It’s not the nobleman in the castle that frees the serfs but rather the serfs themselves.  Sullivan sees that anything he gives them will just be sucked into a poverty vortex, and nothing will change.  The real reason for his failure is suggested in the words of Jesus when he told the young rich man that if he wanted to be whole he would need to give all his wealth to the poor, which of course the rich man could not do.  Neither can Sullivan, who’s only playacting in the world of shadows.

When he gets truly cut off from his highfalutin world Sullivan realizes that no one who experiences extreme want would choose it voluntarily.  He also learns how poverty degrades the character, compelling people to commit crimes they would never have done had they had enough and been treated with respect.

In the most moving scene a black preacher exhorts his congregation that all men are created equal and leads them in singing “Let My People Go.” The small church is about to open its doors to a horde of dirty prisoners chained together at their ankles, treating them to a series of comic films.  For one brief shining hour their troubles are forgotten, their burdens lifted.  The kindness with which these descendants of slaves welcome in these prisoners of all races, allowing them to sit up front to enjoy the films, is both touching and illuminating.

A Call to Awakening

Eckhart Tolle has pointed out that laughter is a means of awakening us to what is, that is, a way of not taking things seriously, of allowing the light of acceptance to flood our beings, of recognizing that our pain is brief and that contentment can be found only in gratitude for reality.

After Sullivan is rescued, he goes back to Hollywood deciding to make comedy films instead of the cinematic pity parties he’d planned.  He foregoes work on O Brother, Where Art Thou, and that’s fine; the Coen Brothers took up the torch in 2000, with superb results, telling the comic tale of three escaped prisoners and their constantly changing fortunes.  It made us laugh– and helped us accept.