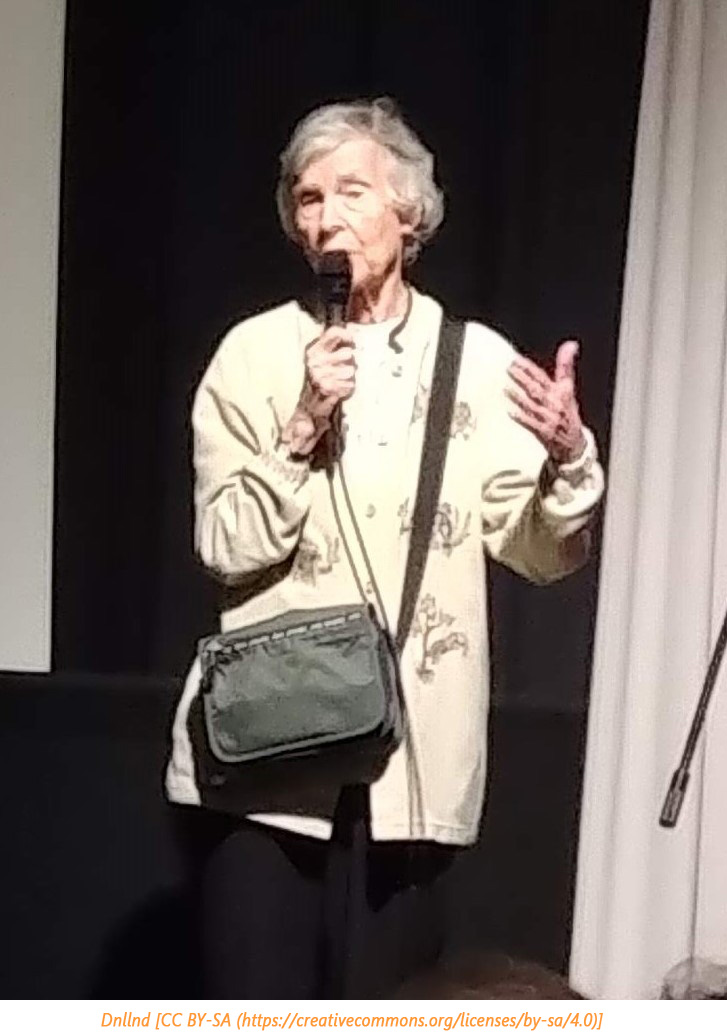 Anne Innis Dagg was known as “the woman who loves giraffes,” and was the subject of a 2018 documentary by the same name.  When Anne was three years old, she saw a giraffe for the first time at the Brookfield Zoo in Chicago, and it became her favorite animal—as she wrote in her memoir Smitten by Giraffe: My Life as a Citizen Scientist.

Anne is Canadian, born January 25, 1933, in Toronto, Ontario. She received a B.Sc. in Biology and an MA in genetics from the University of Toronto. Her PhD in animal behaviour was granted from the University of Waterloo. Dagg was a zoologist and a feminist who wrote many books, but her love remained the study of giraffes. In 1956, at the age of 23, she travelled to the continent of Africa and was the first person in the world to embark on a study of animal behaviour in the wild. At the Fleur de Lys Ranch in South Africa she pursued her study of giraffes. Her trailblazing steps were later followed by Jane Goodall and Dian Fossey who became much better known. One year later, in 1957, Dagg came back to Canada armed with mounds of pioneering research from her time in Africa. Soon after returning she married physicist Ian Ralph Dagg (1928-1993) and they had three children.

Anne was hired by the University of Guelph as an assistant professor. She published over 20 scientific papers but was denied tenure, supposedly because of concerns about her qualifications, and because she lived outside of the town of Guelph. Although she was told by one of the Deans that he would never give her tenure because she was a married woman and had a man to support her. Dagg describes her treatment as “demoralizing” and this is seen as a precursor to her becoming actively involved in feminism.  In 1972, Dagg was hired as a professor at the University of Waterloo and again was told by the Dean that she could not apply for tenure because she was a married woman.  She continued to work at the University of Waterloo for 35 years, as a resource person, senior academic advisor, and academic director.  Anne Innis Dagg wrote extensively about the gender bias she faced in the academic world.

Although Anne was best known for her study of giraffes, she also studied other animals including Canadian wildlife. While a professor at the University of Guelph’s Department of Zoology (1968 to 1972), she taught courses on wildlife management, mammal gaits, and other topics.  In 1972, after going to the University of Waterloo, Dagg founded the Otter Press, a publishing company, and her first publication was Matrix Optics written by her husband Ian Dagg. In 1974 she published her first book on Canadian Wildlife, which was co-written by C.A. Campbell, titled Mammals of Waterloo and South Wellington Counties. Her first book about her study of giraffes was published in 1976 and was co-authored by Bristol Foster, and titled Giraffe: Biology, Behaviour and Conservation and was considered by many zoologists to be the “Bible” on giraffes.

Dagg received many accolades including the Batke Human Rights Award in 1984, the Lane Anderson Award in 2017, and was named Honorary Member of the Canadian Society of Zoologist in 2019. A documentary about Anne Innis Dagg titled The Woman Who Loves Giraffes was released in 2018, and the site for the documentary contains more information about this almost forgotten woman of interest.