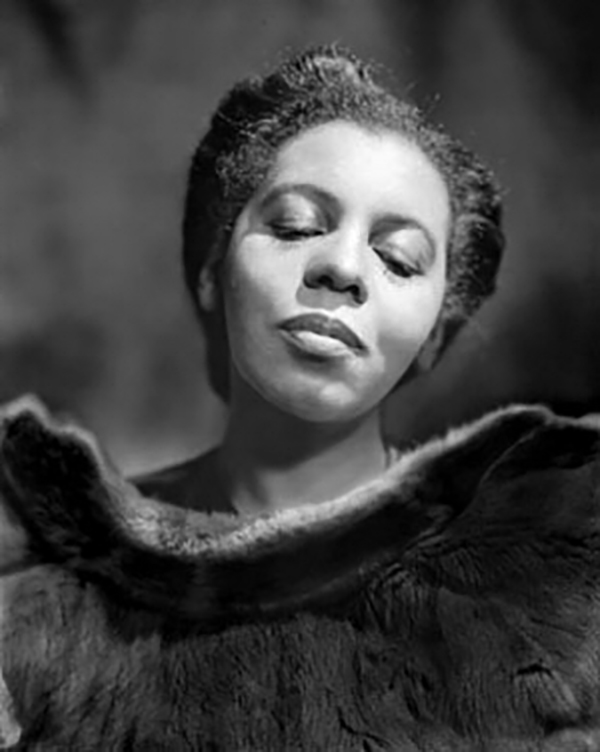 February is Black History month and it is a time when Canadians celebrate the contributions made by Black Canadians who helped to make Canada the culturally inclusive nation that it has become.

Portia White (1911-1968) was the first Black Canadian contralto singer to win International praise.  Her voice was described by critic Edward Wodson of the Evening Telegram as a “gift from heaven.”  Another reviewer wrote “she sings spirituals with pungent expression and beauty of utterance…”

Portia White was one of 13 children.  Following the war, the family moved to Halifax where William White, Portia’s father, became the pastor of the local Baptist Church.  Portia began singing in the church Choir at the age of six.  She loved singing and was so determined to pursue a singing career that she walked 10 miles a week for singing lessons.  In 1939 Portia won a scholarship to the Halifax Conservatory of Music but continued her education and graduated from Dalhousie University and began teaching within the Black communities in Nova Scotia.

In 1941 White gave up her teaching career to spend more time on her singing.  She encountered many difficulties acquiring bookings because of her race.  The high point of her career was reached on March 13, 1944, at a highly celebrated recital at New York’s Town Hall.  She was the first Canadian to perform there.  She performed two more concerts at Town Hall in 1944 and 1945.  Unfortunately, in 1952 White’s career was cut short as she experienced vocal difficulties and had to retire from performing publicly.  She moved to Toronto to teach voice while also performing the occasional concert.  One of her final performances was in 1964 at Confederation Centre of the Arts in Charlottetown PEI, when she sang for Queen Elizabeth and Prince Philip.

She received a lot of praise and accolades in her life.  A quote in the Halifax Chronicle-Herald credited White with being “the singer who broke the color barrier in Canadian classical music.”  In 1995 the Government of Canada named White a “person of national historic significance.”  A postage stamp bearing her image was issued by Canada Post in 1999; also, in 2004, a life-sized sculpture of White was carved from a tree in front of Zion Baptist Church in her hometown of Truro Nova, Scotia.  At the 2007 annual East Coast Music Awards Portia White was posthumously presented with the Dr. Helen Creighton Lifetime Achievement award.  This award, as described by the East Coast Music Association “recognizes an individual or group who has had a profound and lasting effect on the Atlantic Canadian music industry.” Portia White died in 1968.

An exhibit which includes photographs, recordings and many of White’s personal items has been gathered together and is on display at Don Heights Unitarian Congregation in North York Ontario to commemorate 50 years since White’s death.  There are plans to circulate this exhibit throughout Canada before putting it on display permanently in Truro Nova Scotia.