Articles
The Voice
The Search for Roots 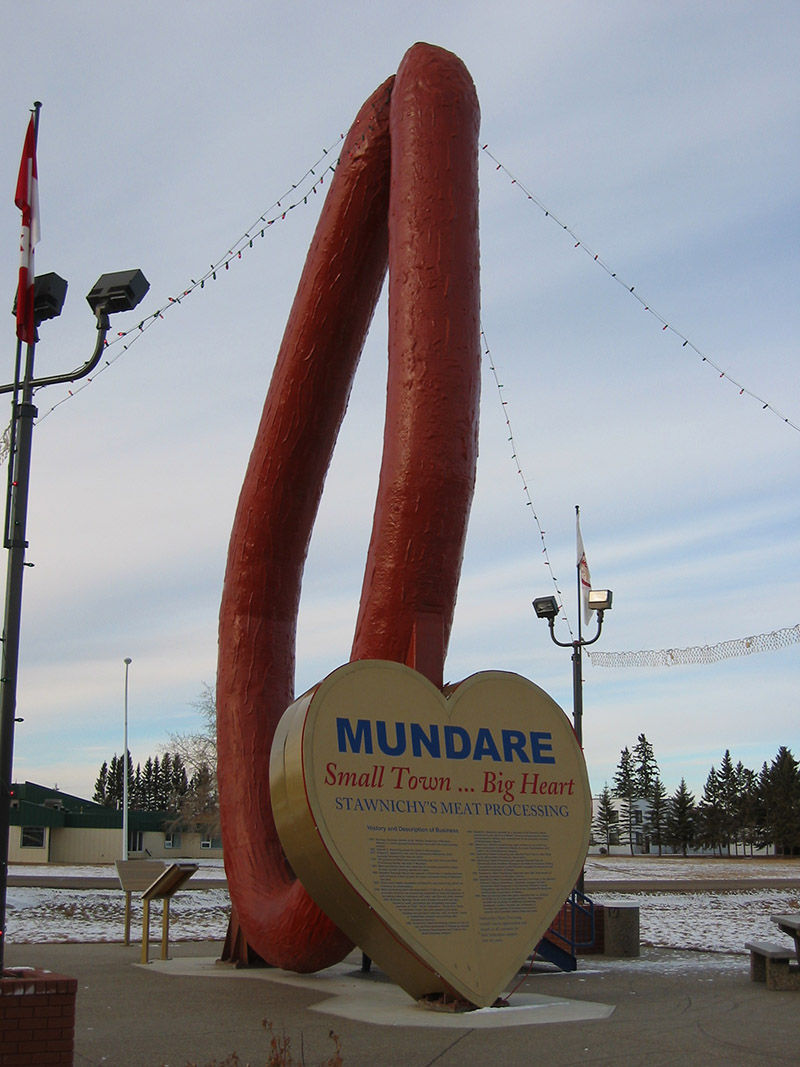 Albertan travel brochures frequently attract visitors to the province with glossy images of aquamarine waters, majestic snow-capped peaks, and roving wildlife.  This marketing technique has proven effective, as thousands of visitors, myself included, flock to Banff, Canmore, and Lake Louise each year.  Although I settled in Calgary in 2012, and Edmonton in 2015, my fondest memories of Alberta occurred two years after I left the province.

Landing at the Edmonton airport one frigid January morning, with sudden clarity I realized that what was truly lacking in my life was a glimpse of the world’s largest sausage.  Thus began the “World’s Largest” tour, a never fully assimilated Ontario transplant’s road trip through oil country.  As I braved harsh road conditions in a tiny rental car surrounded by impossibly large pickup trucks, I realized that I had never truly understood Alberta.

Perhaps this feeling of not belonging and not fully understanding stems from my heritage.  As a member of the Ukrainian diaspora who immigrated to Toronto during the 1980s, I often feel that I exist between two worlds, constantly switching between languages, customs, and mannerisms.  Ukrainian diaspora often suffer from common experiences as many immigrants, such as anxiety over assimilation and language barriers, to deeper issues, such as collective and intergenerational trauma.

With so many unanswered questions, I set out to learn more about the history of Alberta, including its Ukrainian community.  Unlike eastern Canada, which is often the first stop for newer Ukrainian immigrants, Albertan Ukrainians have settled and assimilated over the years.  Ironically, the road trip that began as a search for history and roots turned into one filled with old bones, cemeteries, ghost stories, and hauntings.

It is only fitting that I began my trip into the past with a visit to where it all began.  South of Edmonton, Drumheller’s impressive Royal Tyrell Museum dedicates itself to the collection, preservation, presentation, and interpretation of paleontological history, with extensive fossil displays and mounted dinosaur skeletons.  The surrounding Albertan Badlands, with their memorable reddish surfaces and signature hoodoos, are home to spectacular rock formations and fossil beds.

Continuing north, I officially began my “World’s Largest” tour.  Bypassing the world’s largest Golf Tee in Trochu and the world’s largest Oil Lamp in Donalda, I hurried north on Yellowhead Highway to see the world’s largest Pysanka (Easter Egg) in Vegreville.  The Pysanka, 25.7 feet long, 31 feet high, and 18 feet wide, is a large jigsaw puzzle, with 524 star patterns and triangles, facets, nuts, bolts, and struts.  In 1973, the Alberta government established the Alberta Century Celebrations Committee to coordinate the following year’s centennial celebration of the RCMP.  The Vegreville Chamber of Commerce chose the Pysanka to represent the peace and security that the Mounties had offered the area’s multicultural citizens.  It is also a symbol of harmony, vitality, and culture.

Leaving Vegreville, it was finally time to see the famed sausage.  Mundare’s 42 feet tall and 12,000 pound sausage, built as a tribute to Stawnichy’s Meat Processing, a sausage factory famous for its kielbasa – and for serving the best Ukrainian sausage in all of Canada.  Further north, in Andrew, the world’s largest Mallard Duck weighs an impressive one tonne and has a 23-foot wingspan.  Erected in 1992, the duck commemorates the duck breeding grounds in the surrounding wetlands.  Continuing along, the world’s largest Mushrooms in Vilna celebrate the mushroom hunting traditions of early Ukrainian settlers.  At over 18 feet tall, the statue weighs over 18,000 pounds.  Built in 1967, the world’s first UFO landing pad in Saint Paul is adjacent to tourist information centre with UFO exhibit built in 1990.  Finally, in Glendon, the massive perogy and fork, symbolizes the traditional Ukrainian dish, often filled with cheese and potatoes or sauerkraut and mushrooms.  Erected in 1993, the monument is 27-feet tall and 6,000 pounds.  Glendon’s Perogy Park Restaurant at 12-4 Street East serves Cental Alberta’s best perogy and kielbasa, or varenyky i kovbasa in Ukrainian.

In addition to the “World’s Largest,” this Central Albertan area is filled with beautiful old Ukrainian churches, which can be read about in Historical Driving Tour: Ukrainian Churches in East Central Alberta.

Continuing east, no trip through central Alberta would be complete without a different sort of history.  Fort Kent, northeast of Bonnyville, is famed for its Fort Kent Wendigo.  Legend states a local doctor, grieving the death of his wife after a smallpox outbreak, became possessed by a Wendigo spirit.  After killing approximately eleven people, he fled into the woods; to this day the spirit preys on the weak and his been blamed for a great deal of animal deaths in the area.  However, many believe that the story actually began in 1879 with the possession of Cree trapper Swift Runner.  Nearby Cold Lake has its own interesting history.  As of the largest and deepest lakes in Alberta, Cold Lake is believed to be home to the great fish Kinosoo of Cree legend.  During the 1920s and 1930s, people from all over Canada travelled to the lake in hopes of spotting the giant.

I ended my road trip in a place that tied everything together.  The Ukrainian Cultural Heritage Village, east of Edmonton in Lamont County, details the impact Ukrainian immigration had on Albertan identity and culture.  The first Ukrainians arrived in Montreal in 1891, and later spread throughout Canada, with the majority in Alberta, Saskatchewan, and Manitoba.  150,000 Ukrainians arrived between 1891 and 1914.  In Alberta specifically, Ukrainian settlement began in 1896, reaching its full proportions in 1898, with many from Galicia and Bukovyna, Ukraine.  They settled east and west of the North Saskatchewan River, and further north of Lamont County.  During this time, the Canadian government classified Ukrainians from Galicia as enemy aliens and interned over 5,000 in camps.  The second wave of immigration came in 1922, with Ukraine’s incorporation into the USSR, while the third wave come after the Second World War.

Looking beyond the obvious and digging deep, figuratively and metaphorically, can yield surprising results.  With what began as a historical tour and desire to see famous landmarks, turned into one of increased understanding of this province, to a greater degree than in all my years living here.  Thank you for the memories, Alberta.

From Where I Sit – In My Backyard

From Where I Sit – Canada Day AIESEC-Style