On March 9, 2020, the Canadian government introduced Bill C-8 to ban conversion therapy, a discredited practice that attempts to change the sexual orientation and gender identity of the LGBTQ2 community through various means, including therapy and medication.  This bill is premised on the fact that conversion therapy undermines the dignity of the queer community and challenges the fact that one’s sexual orientation and gender identity can or should be changed.

The Department of Justice Canada’s official news release states that conversion therapy “reflects myths and stereotypes about LGBTQ2 persons, in particular that sexual orientations other than heterosexual, and gender identities other than cisgender, can and should be changed.”  In addition, it states that, “Criminal law reform is an important step toward protecting LGBTQ2 persons and promoting their rights, but more remains to be done.  The Government of Canada is committed to working with provinces, territories, municipalities and stakeholders to ensure that Canada is a country where everyone – regardless of their gender expression, gender identity, or sexual orientation – can live in equality and freedom.”

The bill can be traced back to a 2019 petition by Devon Hargreaves of Lethbridge.  Petition E-1833, which received 18,200 signatures.  Although the petition was initially rejected in March 2019, on the basis that conversion therapy was a provincial or territorial issue, a June 2019 letter by Justice Minister David Lametti, Health Minister Ginette Petitpas Taylor and Edmonton Centre MP Randy Boissonnault, restarted the process.

A 2019 University of British Columbia study revealed that 20,000 Canadians have been subjected to conversion therapy.  In addition, 2019-2020 Community-Based Research Centre Sex Now Survey revealed that 1 in 5 gay, bisexual, trans, Two-Spirit and queer, or “GBT2Q” individuals have “experienced sexual orientation, gender identity or gender expression change efforts … and of them, nearly 40 per cent (or as many as 47,000 GBT2Q men in Canada) have experienced conversion therapy.”

In the medical field, the Canadian Psychological Association (CPA) opposes conversion therapy.  In a released policy statement, they stated, “Conversion or reparative therapy can result in negative outcomes such as distress, anxiety, depression, negative self-image, a feeling of personal failure, difficulty sustaining relationships, and sexual dysfunction.”  In October 2019, the College of Alberta Psychologists officially banned conversion therapy, with “updated standards of practice prohibited members from providing any treatment aimed at changing or modifying a client’s sexual orientation or gender identity and expression.”  According to Dr.  Richard Spelliscy, chief executive officer of the college, explained that this is because “same-sex attraction is not a mental health disorder, in fact hasn’t been considered one for at least 40 years.”  No official positions on conversion therapy are available from the Alberta Medical Association and the Canadian Medical Association.

Despite this progress, critics state the bans have limited scope, and many grey areas exist.  For example, in Vancouver, while the ban prohibits business from providing services in conversion therapy, including changing sexual orientation or gender identity, it becomes grey in terms of faith groups, which claim that they offer social support or identity exploration.

In June 2019, The UCP disbanded the NDP’s working group to deal with this issue, originally established by former NDP Health Minister Sarah Hoffman in February.  According to Health Minister Tyler Shandro’s press secretary, Steve Buick stated this was because “It’s not practised in Alberta and it cannot be, because no health professional regulator would permit it.”  However, co-chair of the working group NDP MLA Nicole Goehring retorted, “It’s not advertised, the language is vague, but it’s still occurring.”

When contacted for a statement, Dr. Travis Salway Assistant Professor at Simon Fraser University’s Faculty of Health Sciences stated, “A federal conversion therapy ban is a critical step toward eradicating conversion practices from Canada.  It sends a clear message to parents, practitioners, and LGBTQ2 people themselves, that their identities are valued, and that any attempts to repress or deny their identities are tantamount to abuse.  I would add that while no bill is perfect, we should look carefully at the bill and share feedback with our MPs about ways the bill can more effectively get at all forms of conversion therapy, especially those targeting gender identity and expression.”

Dr. Kristopher Wells, current Canada Research Chair (Tier II) for the Public Understanding of Sexual and Gender Minority Youth at MacEwan University provided The Voice with a statement as well, replying that “Yes, we would expect there to be wide all party support for this legislation.  All federal parties, except for the Conservatives, had prohibiting conversion therapy as part of their election platforms.  Recently, several prominent conservatives have come out in support of the new government legislation.  Although, a good start, the proposed Bill could be strengthened to also include protections on the grounds of gender expression, a more comprehensive definition of what conversion therapy is and what actions are permissible, and the prohibitions should be extended not just to minors but all adults.  Since conversion therapy is a fraudulent and dangerous practice, no adult can truly “consent” to something that is known to be harmful and poses a well-documented threat to public health and safety.”  Wells continued, “We hope that amendments will be brought forward through the consultation process that will help Canada enact the strongest and most comprehensive conversion therapy prohibition legislation in the world.”

While conversion therapy is no longer advertised, it still exists underground.  In an interview with CBC News, Wells stated, “It might be happening after business hours.  It might be happening in a basement, or unfortunately, it’s still happening in some faith communities and cultural communities, under the guise of praying away the gay.  Or that homosexuality doesn’t exist in that community, and anyone who shows same-sex tendencies or who’s gender diverse needs to be fixed or cured in order to gain acceptance in their community.”  In an interview with The Calgary Star, Salway stated, “They’re borrowing largely outdated theories and notions around psychology and development.  But what’s changed is who’s practising them, and how they’re being advertised or promoted.  And …  that does create a lot of challenges in banning the practice.”

As a final note, as positive changes are occurring for the queer community nationwide, Alberta has also found itself in the midst of discriminatory policies.  As a reminder of how far the community has come, Albertans, as well as all Canadians, can turn to Edmonton’s Vriend case, which altered the lives of queer citizens countrywide.  In 1994, Delwin Vriend was fired from his job at Edmonton’s The King’s College, now The King’s University, a private Christian school, for being gay.  Receiving no help from the Alberta Human Rights Commission, which, at that time, offered no protection against discrimination based on sexual orientation, Vriend took the case to court.  Although he initially won, the case was lost on appeal in 1996.  However, in 1998, the Canadian Supreme Court found Alberta’s legislation to be unconstitutional and sexual orientation was read in into Alberta law, with the Klein government choosing not to invoke the notwithstanding clause to override the decision.  This unanimous Supreme Court ruling was a one of Canada’s monumental moments in the struggle for queer rights.  In later years, this precedent led to eventual law changes to marriage, inheritance rights, pension rights, and adoption rights for the queer community Canada-wide.

For students who would like to learn more about Alberta’ queer history, Queer Youth in the Province of the ‘Severely Normal’ by Gloria Filax, an AU assistant professor in the Master of Arts, Integrated Studies is a start.  The book title refers to a statement by then-premier Ralph Klein who said that most Albertans, who he described as “severely normal,” did not support homosexuality being protected under Alberta’s human rights code.  The book presents voices of the province’s queer youth, with the juxtaposition of expert voices.  AU students who wish to learn more about the community in general are encouraged to consider (WGST) 301Women’s and Gender Studies, which “aims to provide students with a deeper understanding of the ways in which gender, identity and sexuality operate in contemporary North American society.”  Topics include femininity, masculinity, disability, as well as queer and transgender politics. 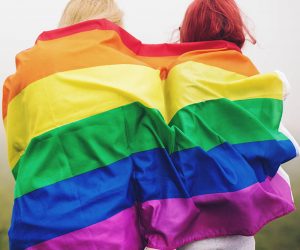