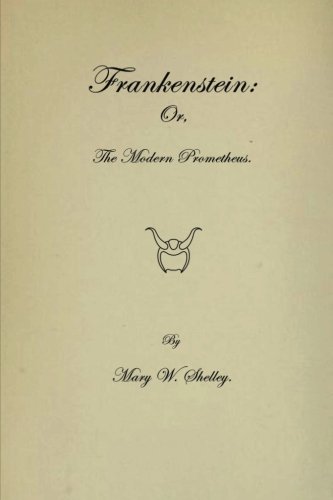 Book: Frankentstein; Or, the Modern Prometheus

Faced with the current COVID-19 pandemic, the implementation of social distancing, travel restrictions, and self-isolation, many of our regular pursuits and pastimes have been curtailed.  This situation has affected schools, offices, stores, restaurants, bars, concert venues, airlines, public transit, and even fitness facilities.  With everyone staying home and cocooning, it may be a good time to revisit at least one influential example of classic literature.  While it may be more difficult to get our hands on a new copy of any book right now, several sources, including public libraries, provide online access to Mary Shelley’s Frankenstein (originally titled Frankenstein; Or, the Modern Prometheus).  A quick search of my local library’s site, for example, brings up numerous e-book editions of the novel, including Frankenstein: Annotated for Scientists, Engineers, and Creators of All Kinds, a Spanish language version, downloadable audiobooks, and streaming video adaptations.  Clearly, it’s an extremely popular story.

First published in 1818, Mary Shelley’s Frankenstein belongs to the horror category, but was also instrumental in creating the science fiction genre.  In the novel, Victor Frankenstein collects and connects parts from dead bodies, creating a living being.  As soon as it’s brought to life, however, the scientist is repulsed by his creation, leaving it rejected and abandoned.  As revenge, the creature murders Victor’s younger brother William.  Even though Victor knows that his creation is the murderer, William’s nanny, Justine is blamed for the death, tried, and executed.  There are three more deaths in Victor’s circle: the murder of his friend Clerval; the murder of Elizabeth, his new wife who also happens to be his adopted sister (suggesting that Victor’s experiment wasn’t the only problem affecting the family); and Victor’s father, who dies from the combined grief of losing his son William, the beloved nanny Justine, and his daughter-in-law / adopted daughter, Elizabeth.  Frankenstein eventually loses his own life when he attempts to hunt down and destroy his creation.

Modern readers may find the novel’s pace slow, and dialogue wordy and overly elaborate, yet it’s consistent with the literature of that era, and frankly not particularly intimidating.  It’s interesting to note how the narrative’s point of view also changes over the course of the novel.  It begins from the perspective of Robert Walton, the captain of a ship exploring the arctic, and his encounter with Victor Frankenstein.  Frankenstein continues the story, relating his early life, scientific studies, his single-minded effort to improve upon humanity, and the creation of the being that he instills with life (but never names).  The creature then describes how he teaches himself to read and write, his struggles and his loneliness, and his demand that Frankenstein build a mate for him, a demand to which the scientist initially agrees.  Afterward, Frankenstein again takes over the narrative.  He decides to abandon his efforts to create the companion, and then witnesses his creature’s retaliation.  Finally, the story concludes with Walton as the observer as Frankenstein dies and the creature disappears.

While it may be written in an older literary style, Shelly’s novel successfully conveys an eeriness surrounding Frankenstein’s single-minded scientific pursuit, and then the threat posed by the creature turned stalker and killer.  In some ways, this early 19th century story seems to be a predecessor of the engineered and weaponized superheroes and supervillains that are part of the recent X-Men series.

Shelly’s novel exhibits the spirit of discovery and enquiry that characterized the early 19th century.  Captain Walton, who relates part of the story through his letters, is on an arctic expedition when he encounters Frankenstein and the creature.  Though Shelley provides no details about the manner in which the creature is brought to life, we do know that around the time of the novel’s writing, there was speculation that electricity could be used to reanimate the dead (which Shelley hints at in the introduction to the 1831 edition of the novel).  Shelley’s story also reflects the grim practices of medical science in the early 19th century, since in order to build his creation, Victor Frankenstein harvests tissues from the dead.  At the time, body snatchers were actually stealing corpses for use in medical education, and over 10,000 bodies were stolen from British graveyards between 1800 and 1810.

While the practice of body snatching may have ended, Frankenstein’s continued relevance comes from the ethical questions which it raises.  Shelley’s novel about a man taking on the role of God – and unleashing a monster – has implications for scientific experimentation on humans, genetic manipulation including the merging of human and animal DNA, the development of synthetic life and artificial intelligence, the harvesting and sale of human tissues and organs, human-induced climate change, and environmental devastation.

Unfortunately, many people are only familiar with cinematic versions of Frankenstein.  (Many people also mistakenly believe that the creature is named Frankenstein).  These films tend to feature an assortment of electrical contraptions that arc, spark, and crackle, the mandatory laboratory assistant (Fritz or Igor), and a mob of angry torch-bearing villagers chasing a monster with a flat skull.  (Did Victor Frankenstein forget to replace the dome of his creature’s skull after he inserted its brain?) Most of these images come from a 1931 Universal Pictures film directed by James Whale and starring Boris Karloff as the creature.  None of these dramatic touches appear in the novel.  More importantly the films usually fail to give a sense of the novel’s depth and complexity, and they overlook Shelley’s suggestion that parenting and education make vital contributions to the development of character.  Her intelligent, articulate, fast, and nimble creature is often depicted in film as unthinking and silent, only able to move slowly and awkwardly.  Frankenstein’s abandonment of his creature, which is so central to the original story, and which turns the creature into a monster, is rarely explored in cinematic adaptations of the story.  While Shelley’s novel reflects the issue of nature versus nurture, most films fail to consider this debate.  For readers who might have an interest in this original, profound, and compelling story, the novel is well worth the effort.

Book Review—Making the Monster: The Science Behind Mary Shelley’s Frankenstein