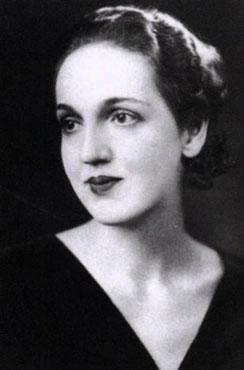 Mona Louise Parsons was the only Canadian female civilian to be imprisoned by the Nazis during the Second World War.  Parsons and a few of her closest friends formed a resistance group with the intention of hiding Allied airmen who had survived being shot down over Holland.  Parsons and her millionaire husband built a secret apartment in the attic of their home, Ingleside, where they could safely harbour British airmen.  Unfortunately, things did not turn out as planned.

Parsons was born on February 17, 1901 in Middleton, Nova Scotia.  She began her career studying acting and taught elocution at the Conway Central College in Conway, Arkansas.  Parsons moved to New York City in 1929 and became a chorus girl in the Ziegfeld Follies.  After a brief time in the arts, Parsons became a nurse and worked in a doctor’s office on Park Avenue.  Parsons’ brother introduced her to a Dutch businessman, and on September 1, 1937, they married.  Willem Leonhardt and Mona Louise Parsons spent six months traveling across Europe before returning to Amsterdam to build their dream home, Ingleside.  They managed to hide many Allied airmen before the resistance was infiltrated by a Nazi mole.  Upon that discovery Willem went underground, assuming that the Nazis would leave Mona alone as she was a female.  Within days, she was captured and sent to jail.

On September 29, 1941, Parsons was sent to Weteringschans Prison in Amsterdam.  Her trial followed on December 22, 1941, where she was found guilty and sentenced to death.  After an appeal, her sentence was commuted to life with hard labor.  Parsons worked on an assembly line where she frequently became ill and lost a tremendous amount of weight.  She was moved to another prison in Vechta where she was subjected to more abuse and was kept in a tiny cell with four other inmates who slept on a bed of straw.  On March 24, 1945, the prison was bombed and Parsons and another prisoner escaped.  During the next three weeks they walked 125 km through Germany before becoming separated.  Parsons met a Dutch farmer who was able to assist her in getting to the Nova Scotia Highlanders.

Mona and Willem were reunited after the war, but Willem died soon after.  Following his death, Mona discovered Willem had had a mistress. One quarter of his estate was left to this mistress and the other three quarters were given to his biological son, of whom Mona had not been aware.  Subsequently, Mona was involved in a legal battle for many years, but lost and ended up with nothing.  Parsons returned to Nova Scotia and became reacquainted with a childhood friend and they married and lived the rest of their lives in Lobster Point, Chester Nova Scotia.

Nothing was even mentioned about Mona Parsons’ heroic acts until Andria Hill-Lehr wrote Mona’s biography in 2000.  Mona Parsons: From Privilege to Prison, from Nova Scotia to Nazi Europe describes Parsons’ courageous and daring acts attempting to save British Allied airmen from capture and death.  Further recognition for Parsons came when Historica Canada released a Heritage Minute about her arrest and eventual escape.  A statue was erected in Wolfville Nova Scotia in Parsons’ honor titled The Joy is almost too much to bear.  Mona Parsons died November 28, 1976 and is buried in the family pot in Wolfville Nova Scotia.

From Where I Sit – Mother

Write Stuff – Forget Me Not