Columns
The Voice
The Creative Spark—Shakespeare’s Guide to Dialogue 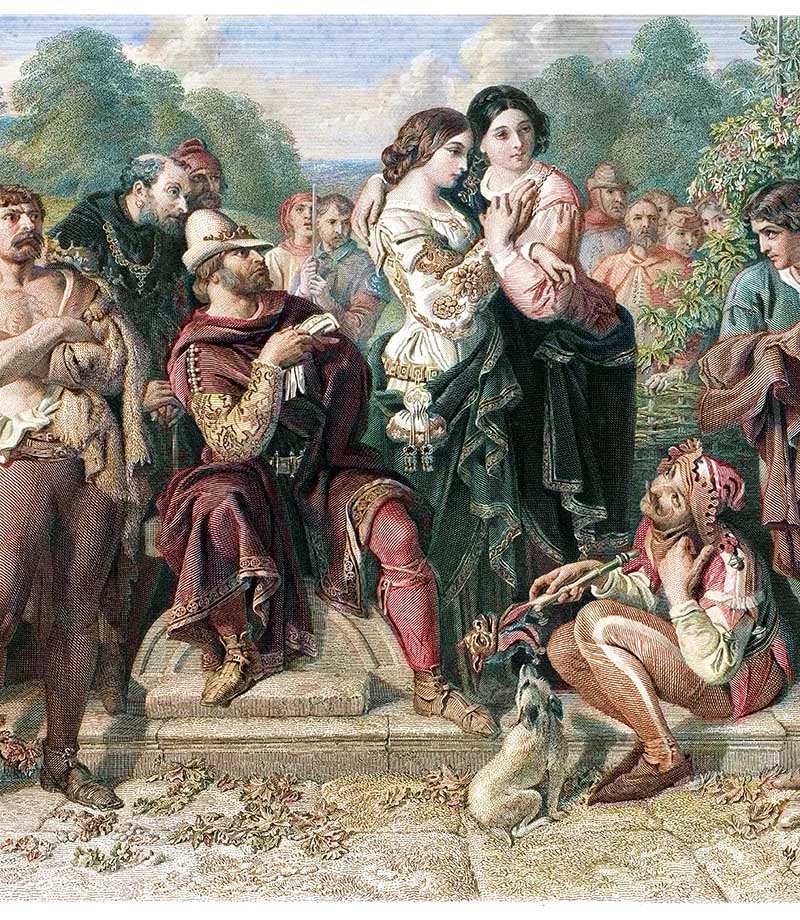 Okay, so Shakespeare didn’t write this guide.  Nor did Chekhov, Tolstoy, or Mama June.  Didn’t Mama June publish?  Regardless, if any of them wrote what follows, they’d be beaming.

With that said, here is Shakespeare’s guide to character dialogue:

Tip #1: Hey, have you tried cutting out words?

Cut out words, even if it hurts.

One playwriting professor of mine had many wonderful qualities but was vindictive to an extreme.  And I was his target.  He took my script, and no-one else’s, and crossed out over 80% of my dialogue.

He showed my bad example to the class and sent me home with the edits.  I felt like crying, but instead I studied it.  From that day on, I wrote tighter dialogue.

Now, imagine your vilest enemy crosses off every unnecessary word on your page until you’ve got 1/5th left.  That’s how tight your dialogue should be written.

Author Rayne Hall says, “Ruthlessly cut anything that doesn’t drive the plot forward.  Where real people use several to-and-fro exchanges, condense it to just one.  The best candidates for cutting are greetings, courtesies, and ritualised small talk.  In real life, they’re polite and often crucial.  In fiction, they’re tedious ballast that puts readers off” (14%).

Here’s an example of dialogue that goes from wordy to tight:

“Wordy: ‘I’m not sure I understand what you’re saying, Mary.  Let me get this right.  Are you saying that you’re leaving me?’

Zingers are the tightest of dialogue.

How do you make dialogue zing?

Author Rayne Hall answers, “Pick an existing dialogue line in which an important character says something impactful or provocative.  Prune it.  Shave off every word that’s not absolutely necessary, until you’re left with the bare essence.  Replace dull words with short vivid ones.  Now it zings” (17%).

If you can give that zinger a double meaning—or a twist—you’ve got a zinger jacked on steroids.

Here is an example:

Sharyn: “This bank heist will be easier to nail than a free beer.”

Get more from your stories with zingers.

I saved the best for last.  Here it is:

How do you give each character a unique personality?  It’s easy!

Just look at author Rayne Hall’s system: “Think of each character’s key personality traits.  Define them in adjectives, for example, honest, sensitive, ambitious, greedy, pessimistic, resentful.  I suggest five for the main protagonist, four for main characters, three for minor characters and two for walk-on roles.  (Of course your characters are more complex than a five-word description, but for this technique, it’s best to focus on the key traits)” (18%).

I’m gentle, affectionate, loyal, nurturing, insecure, and oversensitive.  If I started with the bad traits and said I was oversensitive, insecure, gentle, affectionate, nurturing, and loyal, you would’ve liked me less.  (I read about that in a psychology book.) Keep order in mind when introducing your hero’s and villain’s personality.  Start off with the hero’s best to win over a reader; the villain’s worst to make ‘em bristle.

Here is the key to giving your character dialogue personality:

Rayne Hall says, “Whenever the character speaks, [let] her words reflect one of those [personality] traits, either in content (what she says) or in style (how she says it) ….

Here are some examples of how the content can reflect the personality.

Resentful: ‘Without Mary’s meddling, we would have won the award.’

Me: “If I had been more encouraging toward Mary, we could’ve won.  Next time, I’ll help Mary strengthen her form.”

Obey your personality, at least when used as a character.

You see?  Just plan events that increasingly block your hero’s main desire from coming true.  In turn, your hero is forced to change to keep—or gain—his or her dream.

This works in real life, too.  If one of your traits keep you from getting your dream, do the opposite (or find a positive substitute.)  And so, even though Shakespeare wrote not a word of this, his guide is your safe place in this unsafe world.

The Writer’s Toolbox – Trailing Away