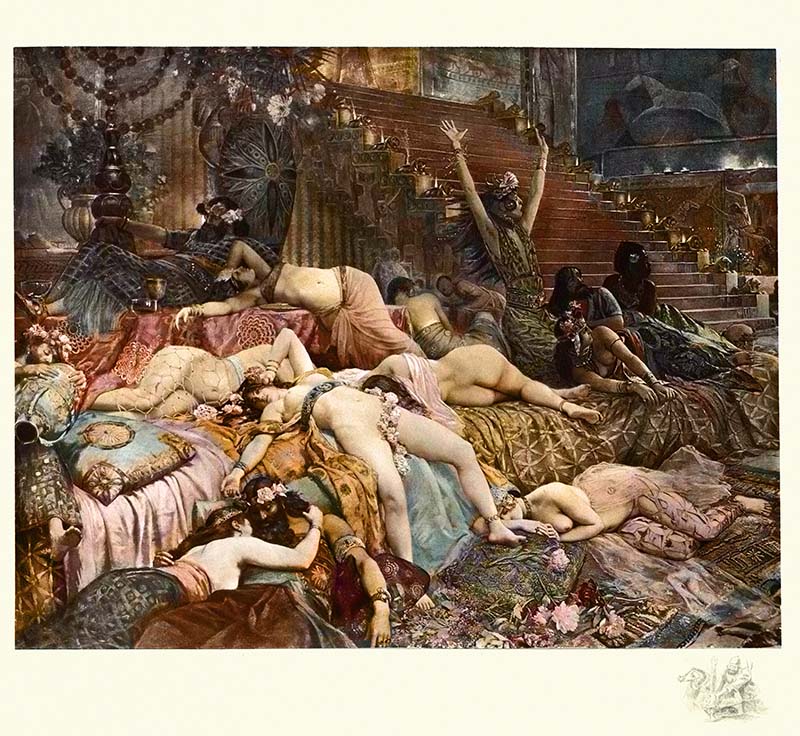 Adults though we be, and increasingly learned ones, we remain susceptible to the hubris our narrow mindsets invariably bring.  So, when pondering Alexandrina Victoria’s 201st birthday and the kicktail long weekend in May that bears her name, we run the risk of oversimplifying the era of her Imperial regime.  England was at the height of her powers and, even as the planet kowtowed to her flag, there at home were manifesting new forms of cultural expression to the shock and horror of traditionalists.

Here are a few quotes where the Queen made her views clear regarding the social changes of her time:

“Were women to ‘unsex’ themselves by claiming equality with men, they would become the most hateful, heathen, and disgusting of beings and would surely perish without male protection.”

And of course, maybe the most famous sexual prescription of all time:

Shifting times led to shifting counter-measures.  Suddenly weirdos, bohemians, and outcasts seemed to present and existential threat to society.  These did not begin in the 1800s, but perhaps reached a zenith during what Michel Foucault called “the great confiscation of sexual ethics by family morality” (Foucault, 89).  This roundup involved “efforts to reinstate the rites of courtly love and…attempts to create a sentimental solidarity or complicity” in the face of ascendant “bourgeois morality” (Foucualt, 83).  In other words: the times they were a-changin’ and lascivious licentiousness that had previously been tolerated now came increasingly under scrutiny.

Well-Adjusted: An Industrial Landscape of the Mind

Remember, how we feel individually is more than our private concern.  Sentiments and tastes always have and always will be socially enforced; only when our feelings clash with the majority do we notice the external and coercive strictures that govern our sensibilities.  Rule one in the social sciences is to know that our sentiments are in part a construction of the times we inhabit.  I’d wager that few of us at AU have a picture of a Queen on our walls but perhaps we keep her morality hidden deep in our hearts.

Anyway, more concerned with finances and business than trifles such as poetry and languid lie-ins after a starry night of tumbles in the English countryside, the ascendant bourgeoisie was interested in encouraging conformity that maximized productivity and a stable home-life.  (Foucault, 89).  This flew in the face of the first stirrings of modern feminist impulse that had emerged in the 19th Century after Mary Wollstonecraft published her famous Vindication of the Rights of Women in 1792.

Throughout Victoria’s reign, traditional rural family settings were breaking apart as labour moved to the factories of the city.  Mores of the past seemed to be sifting away like flour through a mill.  Family values appeared to be under attack.  The industrial revolution had incited a cultural shift that many feared was corrupting the morals of the youth (a charge levelled at Socrates in his time and hipsters throughout the past century).  Questioning tradition came with risks.  As Michel Foucault succinctly summarized: “To attack the family was to flirt with the world of unreason” (Foucualt, 91).  The label of madness came to be affixed to deviant sexual behaviour as well as to personality traits such as being a young lady deemed by her family to be “incorrigible” (Foucault, 81).  Floggings and imprisonment were the result and, wrote Foucault, this was the advent of our modern era that seeks to repress deviant sentiments and actions even as these change with the seasons of time.  Prior to this, village fools, travelling minstrels and local wing-nuts were accepted as part of daily life.  In the Victorian era it now appeared necessary to classify and demarcate the normal from the abnormal, the sane from the insane.  It’s the infancy of this world that we often associate with Victorian society.

Mental health industries emerged alongside factories of the industrial revolution.  An Empire, after all, is about the mind as much as about the goods.  But evening was a blind spot for Victorians; perhaps it’s no coincidence that the phrase ‘the sun never sets on the British Empire’ is associated with the combination of industrial power and social conservatism.  Foucault notes that after the 14th Century Renaissance there was slowly emerging a new consensus whereby “this power of repression…at bottom is not an illustration of the arbitrary nature of despotism, but rather of the newly rigorous character of the demands of family” (Foucault, 90).  What previously remained private, such as illicit affairs and kinky liaisons, came into the limelight as a new moral police state mentality that we now think of, although it began earlier, as Victorian society.

Foucault particularly noted that, even during the counter-cultural heyday of the 1960s and 1970s, Victorian assumptions about what defined rebellion and conformity held sway.  Even as tropes to be countered, the ghost of Victoria loomed large over fields of hippies with flowers in their hair.  Likewise, movies such as One Flew Over the Cuckoos Nest encapsulated this incredulity towards oppression of difference that mental health as an industry came to signify.  Foucault furthers his view of an emerging mental health apparatus alive and well in our time, with particular emphasis on the oppression of alternative behaviours, thought patterns, and lifestyles, in these choice quotes:
“The image of the imperial prude is emblazoned on our restrained, mute, and hypocritical sexuality.”

“Is sex hidden from us…kept under a bushel…? On the contrary, it shines forth.”

Perhaps, as labour became separated from daily life in shifts at a factory rather than toil outside one’s farmhouse, the division of sex and love came to appear as a contestable terrain.

Not A Cushy Job

I feel for Queen Victoria, though.  Born in Germany and expected by birth to rule a foreign country (not unlike hereditary indigenous chiefs of our day) while bearing a dozen children, she then lost the love of her life, Albert, far too soon.  I feel for Her Majesty, too, as one feels for someone whose context supersedes how we see her humanity.  Much of her time echoes our own, I’d argue, and some of her statements remind us that the stirrings of women’s liberation, sexual revolution, and plain old pragmatism toward the proletariat were already in the air.  Foucault noted that leading up to Victoria’s time “the new relations that were beginning to emerge between free thinking and the system of the passions” meant that all too often sexual digression from the norm expressed a corollary to intellectual creativity (Foucault, 82).

Invariably these non-conformist sentiments and actions were labelled as madness.  Likewise, in an act befitting the moralization about identity prevalent in our day, those who suffered from real debilitation were lumped in with those whose sexuality or personality did not jive with present expectations for well-adjusted behaviour.  The moralizing impetus for this belief was expressed by a “Maximilian in the 1495 Diet of Worms” who lumped all maladies social and medical as “sent by God to punish mankind.  Such suffering was of universal value, and in no way a sentence meted out for any particular act” (Foucault, 83).  In other words, all of society had to bear discomfort and, so to speak, think of England regarding their undesirable circumstances.

In every instance, perhaps now as much as in Victoria’s time, “this ‘therapeutic’ demonstrates a rich tapestry of fantasy, and above all a profound complicity between medicine and morality” (Foucault, 85).  Here we’re wise to recall that in academia and practice our education can easily serve to churn up our pre-existing predilections and give them a glossy patina, a veneer of credulity.  We must beware that our cultural inheritance can rear up and bias our minds even as we fill them with learning.  Happily, at AU, our tutors by and large check their egos at the door and apply themselves in a way that helps our learning more than their pet interests.  But if Victoria’s time, the time of the Oscar Wilde trials where homosexuality came to be seen as a public menace rather than a decadent frivolity reserved for the artful classes, deviance of all stripes came to be seen as everyone’s business.  Token weirdos were becoming an endangered species as their pariah status came to be labelled as a form of pathology.  This had political undertones, then as now, based on the reasoned assumption that well-adjusted personalities would conform and labour better while not asking too many tricky questions.  Victoria herself stated:

“Beware of artists, they mix with all classes of society and are therefore most dangerous”

Artists ironically speak of common humanity, as a global sisterhood and brotherhood, more consistently throughout history than any grouping.  This sense of being outside, or more properly above like an eagle or spy drone, lends an air of fartiness and untruth to their proceedings.  At times.  Yet despite their pretences, artists are too often the canaries in the cultural coal mine.  This fact Victoria clearly understood.  Yet we at AU are firmly rooted in the real world as our education propels us forward; we receive the best of academia in a context that keeps us rooted in the reality of Canadiana.

Twin Goals in the Womb of Social Observance

What we see, between Victoria and Foucault, is a concern with two sides of the same tracing paper; Her Majesty’s goal was social stability while Foucault’s interest was in how operations of repression functioned.  Both individuals saw the mental world as a contested terrain from which they remained somewhat aloof.  Is this possible though?  As AU students we seem to be absorbing new information like cells in a state of perpetual osmosis; yet what membrane separates us from the outside world?  Perhaps we are always-already contained by the ideologies in which we swim and which, like the air we breathe, appear to us invisible.

Louis Althusser addressed this possibility and its corollary conclusion: that we can never truly step outside the hegemonic ideological bounds of our context, “What thus seems to take place outside ideology (to be precise, in the street), in reality takes place in ideology.  That is why those who are in ideology believe themselves to be by definition outside ideology; one of the effects of ideology is the practical denegation of the ideological character of ideology by ideology: ideology never says, ‘I am ideological.’ It is necessary to be outside ideology, ie.  in scientific knowledge, to be able to say: I am in ideology (a quite exceptional case) or (the general case): I was in ideology.  As is well known, the accusation of being in ideology only applies to others, never to oneself.” (Althusser, p.  119.)

Whatever our thoughts about our times, our circumstances, and our education, we’re wisely informed to consider that even our certainties are in bed with the epistemic bounds of the ideologies of our times.  So to celebrate the advent of the camping season (with apologies to rightfully aggrieved Albertans if this goes to press and camping restrictions are still not lifted in your province), I leave you with this tenderloin quote from the Monarch (and Empress of India) who ruled the largest empire the planet has ever known (at least prior to globalization making us all one big…something):

“Give my people plenty of beer, good beer, and cheap beer, and you will have no revolution among them.” (https://www.azquotes.com/author/15079-Queen_Victoria).

References
Althusser, L.  (2001).  ‘Ideology and the State’ In Lenin and Philosophy and other essays.  Monthly Review Press: New York.
Foucault, M.  (2006).  History of Madness.  Routledge: London and New York.
Foucault, M.  In Pylypa, J.  (1998).  ‘Power and Bodily Practice: Applying an Anthropology of the Body to the Work of Michel Foucault’.  Arizona Anthropology.  Retrieved from https://journals.uair.arizona.edu/index.php/arizanthro/article/viewFile/18504/18155.