Multiple lifetimes ago I took a Horticulture Technician course in Creston, BC.  Our first unit was mechanics, and I vividly recall possessing a dull and listless gaze as I tried to wrap my noggin around the textbook’s schematics.  The instructor was the local high school mechanics teacher, and he made things interesting by telling stories about unusual engines such as the Slant 6 and about the magic of two stroke versus four stroke combustion.  For physical demonstrations he showed the strengths and weaknesses of metals by smashing a long thin file against a table; the file shattered in two with shocking ease amidst “oohs” and “aahs” and guffaws that enlivened the echoey metalwork shop.  How amazing it was that a delicate little tool could sharpen all the teeth on a mighty chainsaw blade!

The language of mechanics gave us the brain tools to understand lawn mowers and weedwhackers and chainsaws as we took them apart and put them back together.  Learning some of the (to me) foreign language of mechanics taught me a skill that served me well in my later AU years: for each way of seeing there is a particular language of operation, and that only with time does this epistemic naturalize itself in our mind.  This pedagogical process reveals the way our dominant viewpoints came to their place of hegemony; often our initial defence mechanisms resist these alternative discourses because what we already believe seems natural and inevitable.

Humpty Dumpty Was Built To Spill

At first, our beliefs or ideas may seem incommensurate with new material, and frustration can easily ensue.  Our first instinct is to limit the range of our thought to our hitherto unquestioned assumptions.  Who hasn’t thrown up their hands (and possibly tossed a textbook) in frustration at a particularly dense passage and said “what am I going to do with this, even!?”  However, challenging the authority of our naturalized beliefs is core to effective learning.  We tend to see knowledge as something acquired by blank slate selves, tabula rasa, waiting to be filled up and decanted with words and formulas that explain the external world to a T.  Learning’s not so simple, however.  Complex philsophy comes home to roost in practical rafters when we open our minds to the reality that our resistance mechanisms prevent the uptake of new methods.

For any topic or discipline there are multiple voices clamouring for precedence and this polysemy precedes even the formation of our conscious selves.  When we feel closed to a, for-us, unsavoury discipline, we are resisting the very essence of our life as learning subjects; we’re never standing pat, we’re always rolling forward like an egg down a lawny knoll.

Take the aphorism of the chicken and the egg.  Which came first, the identity chicken or the essence egg; does existence precede essence or is the opposite true?  Wendell Kisner, MAIS director, notes these  divergent directions in the philosophy of origin: “Whereas phenomenology concerns itself with tracing a path through successive presuppositions back to something seen to be fundamental, an approach that invites foundation quests, ontology is conceived in the Hegelian system as a matter of following the implications found with ontological determinacies, leading us from abstract determinacies to more concrete ones, and is therefore non-foundationist.” (Kisner, 244).  If an end point is knowable as inseparable from a flowing process, a dialectic, then learning can never lead us astray.  We’re always growing forward and suppositions, like suppositories, merely stab us in the backside.

The Poverty of the Practical

What counts as practical pedagogy claims that practicality, usually associated with hows more than whys, is a master discipline.  For most of us in horticulture, we knew that we needed to use the tools to do landscaping, but were less convinced that we’d have to service them ourselves.

Yet, what is practical in one context often falls with a splat when entering another realm.  At AU we often have to circumvent our first instinct when facing a difficult reading or assignment and allow ourselves to enter the flow of the discourse we encounter.  Gayatri Chakravorty Spivak describes how a learner “surrenders himself (sic) to and masters the text” by opening up to its methods and means (xxviii).  I made it out of that mechanics class unscathed by remembering that I was learning something that broadened my mind rather than considering how rarely I’d have to service my own chainsaw or retorque the blade on my own lawnmower.  And hey, you never know when you’ll use what you learn—and learning how to learn is something we use in every moment of life.

Labile Origins: Life as the Labour of Learning

Learning is about more than acquiring facts; it’s about absorbing new discourses, new modes of inquiry with their specific epistemics.  Think of our infant selves.  We may not have been born selfish in an adult sense, but we were certainly born without conventional communication skills.  Even the basic phonetics of language have been inscribed onto our beings prior to our conscious realizations that prescribe our view of reality.  In this sense writing, as an epistemic inscription illuminating particular forms of meaning, actually precedes speech.  Even numbers are not universal or self-evident; the number zero is a cultural import from an ancient Caka era!

Jacques Derrida and Judith Butler make the case that meaning itself depends upon an accepted, even metaphysical, framework of “what counts”.  Butler eloquently describes this process of development that seems natural but includes indoctrination: “we start to speak, and we are already in someone else’s language, translating what enters the ear—or registers with us through another communicative means—into a grammatical scheme that is prior to sound” (Butler, xxiv).  Perhaps we don’t speak and write so much as we are spoken and written by discourse; the tools in the room are limited by the room’s purpose.  Likewise, the mechanics of sound and syntax bring us to life like a mannequin or marionette even as we feel we are expressing ourselves from within the core of our private meaning.  To learn effectively is thus to allow new versions of ourselves to emerge.

Our misty birth into consciousness, at around the age of three, precedes our aware subjective speaking selves.  We can never know our origins beyond the tools of our mental trade—that is, our culture and language.  “The subject emerges in part through a repression of its origins.  Cutting off, or foreclosing, that origin is thus a condition of possibility of subject-formation.  A direct retun to the origin of the subject would involve contravening the very conditions that make the subject possible, so to return to that origin would be to undo the very conditions of the subject, ushering in psychosis”(Butler, xxi).

We might go nuts if we try to trace our origins without language.  On the other hand, many a painting career began by colouring feelings and many a brilliant poem began by tossing a word salad.  Butler adds: “we cannot even say, ‘there is an origin’ without attributing an ontological status to that which is outside the ontological field within which such claims could be made” (Butler, xxii).  History is inseparable from discourses of time and place; even a humble lawnmower is an artifact of particular middle-class values and norms.  The key to learning and creativity is openness to alternative viewpoints about discursive norms; unlike on a multiple choice exam, our first instinct is not always correct and “this sucks” is never as authentic a sentiment as it feels.

So, when the studying gets tough, don’t just throw up your hands and say “enough, what am I going to do with this even!”   Ask instead, “What of value can this discourse do with me!” We’re playthings of meaning even as we make meaning work for us, and, if we get used to thinking of life and learning that way, obstacles can appear as tests of our openness.  Our evolving pedagogical purposes can transcend any albumen and thus we become chicken and egg, if not chainsaw.

Lost & Found – Why it Pays to Know Someone Smart 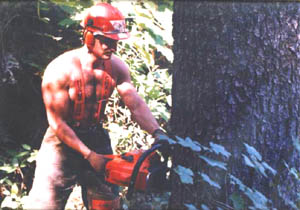