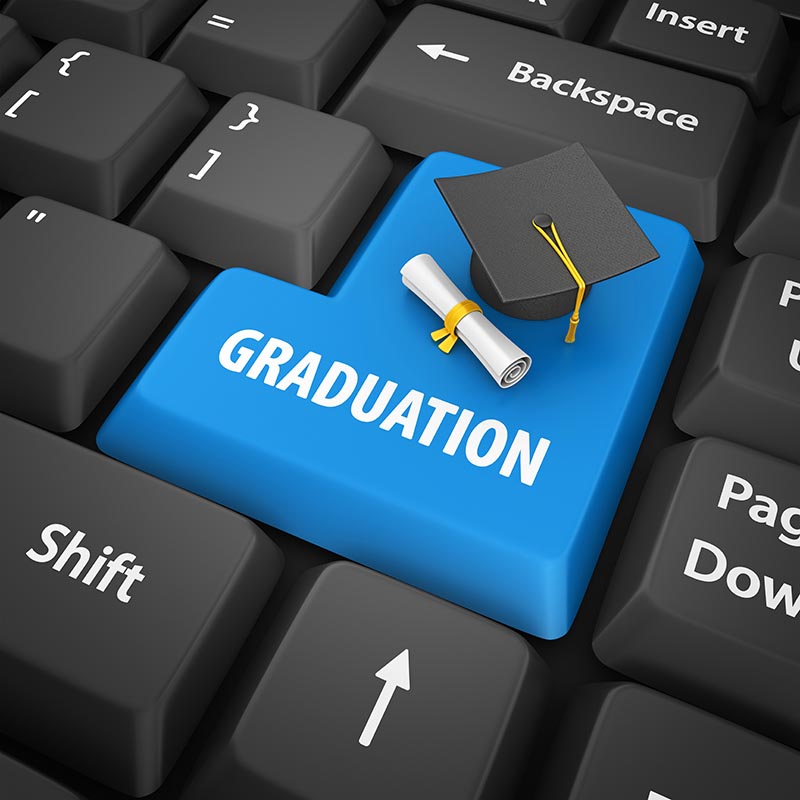 In this new monthly column, The Voice Magazine will be featuring upcoming and recent AU grads, as well as alums.  If you would like us to showcase your journey in an upcoming article, feel free to reach out!  This month, we were able to catch up with two recent grads from Calgary, Shara Kirk and Raphael Ugobi who both recently completed the Bachelor of Human Resources and Labour Relations (BHRLR) program.

Shara initially chose AU from a recommendation, stating, “My boss at the times’ wife had graduated from the HRLR program and that tipped the scales for me to attend AU.  However, I really liked that I could continue to work while earning my degree.”

Her journey to post-secondary studies was like so many AU students, as she revealed, “I didn’t know what I wanted to do after high school.  I took some time off, worked full time and bought my first house at the age of 21.  I had the best manager at my job at the time and I knew I wanted to further my education but wasn’t sure what I wanted to do.  He spoke to me about the program his wife took for Human Resources at AU.  I did some research on my own and on the program and decided I thought that, HR might be the path I wanted to take.”

Shara would definitely recommend the BHRLR program to future students, believing that “AU offers the flexibility to work at your own pace.”  She stated, “It allowed me to work full time, take care of a sick father, and be a Mom at different times in my life.  There was support when I needed it from AU but other than that it was on my schedule.”  Although she did not have a favourite course, she revealed, “I really enjoyed all the Human Resources courses; they were my favorites.”

Her proudest accomplishment “was finishing,” stating, “It took me what felt like a lifetime, but I made it.”  She feels that her family kept her motivated during her studies, revealing, “I watched my mom go back to school as a teenager and further her education.  I knew if she could do it so could I.  She kept me grounded and my husband and kids kept me motivated.”

Advising current students, Shara stated, “You don’t have to do it all at once.  That’s the beauty of AU.  Work at your own pace; you can work full-time, raise a family, and get a degree.  Don’t be so hard on yourself and take it one course at a time if you need to.”  As for future students, she counselled, “With everything going on in the world especially now online learning gives you the flexibility to further your education on a time frame that works for you.”

Moving on with her career, Shara is “happy to be done” with “no regrets.” When asked about this year’s online convocation, she stated, “To me finishing the program was the most important part of the journey.  Yes, it would be lovely to walk across the stage, but I am more excited to get my degree in the mail.”

Despite graduating, Shara plans to continue learning, stating, “I already work in Human Resources and have for years.  I am considering now obtaining my professional designation.  I want to keep growing and learning in my field.”

Similarly, Raphael, who graduated from the BHRLR program in April, chose AU for its flexibility, stating that “it allowed me to carry out my daily activities without many hiccups.”

“I attended a traditional university several years ago,” he stated, “but it did not allow me to incorporate my daily activities as much as AU did.”

Raphael revealed that he would recommend the program to other students, especially since it teaches how to establish and maintain working alliances in society.

When asked about his favourite course, he stated, “All the courses I took at AU in this program are relevant.  However, one of my favourites is PHIL: 333 Professional Ethics.  It opened my unassisted view to the corporate world and taught me how business are operated.”

When asked about his accomplishments during his time at AU, Raphael stated, “I enjoyed learning from the best tutors in the world and cherished the experience I gained as a member of the AUSU Advisory Committee.”  He managed to stay focused by keeping his eye on the prize and “gaining invaluable knowledge.”

Although disappointed in not being able to attend an in-person convocation this year, Raphael understands that “it is for the betterment of the society so, no regrets.”

He shared some advice for current AU students struggling to complete their degrees, stating, “Keep plugging away, you will get there through hard work, dedication setting goals, and allowing yourself to learn.”  As for future AU students considering online education, he stated, “It is well worth it” as he mentioned how AU “challenges you to read and write properly through their numerous research courses.”

Raphael revealed that he will miss the relationship he formed with his tutors and classmates but is excited to “give back” to both society and the world “through work and earning income.” When asked where he sees himself a year from now, he stated, “Only God knows, and I will continue to thank Him for another [year] of excellence.”

Congratulations Shara and Raphael!  Students who would like to learn more about AU’s Bachelor of Human Resources and Labour Relations (BHRLR), which examines employment relations in social, legal, political and economic contexts, are encouraged to check out the program website.