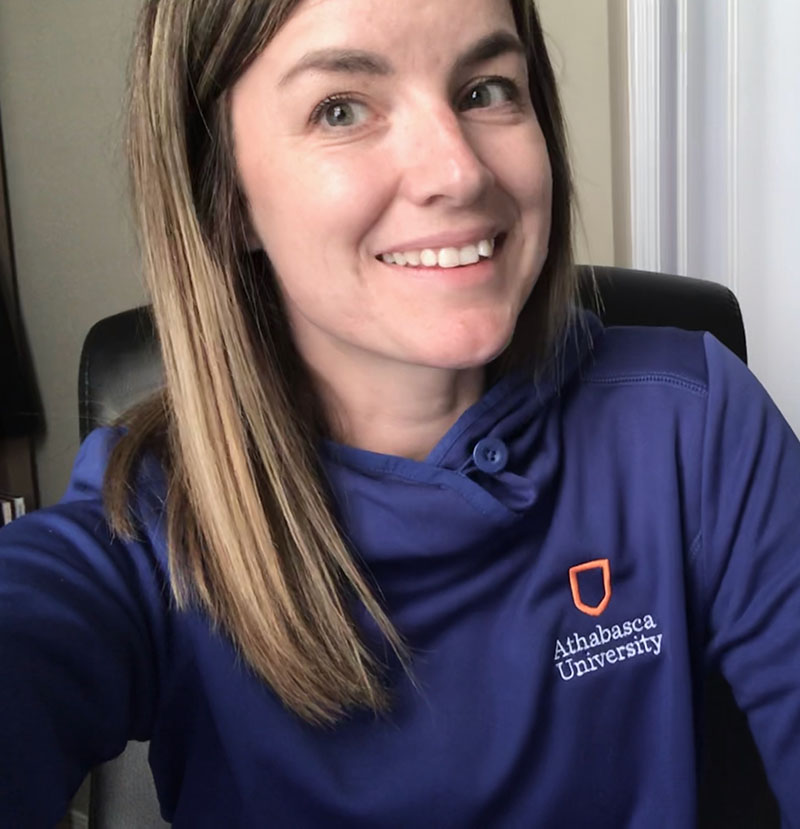 From Vancouver Island, Stacey Hutchings, the newest AUSU Vice President of External and Student affairs, has lived in Calgary for the last five years.  Born to military parents, she’s been as far east as Shawville, Quebec but has spent most of her life between Vancouver Island and Fort St. John, where she worked as a land administrator processing applications on behalf of oil and gas corporations to the BC Oil and Gas Commission, and also as a court clerk for a year before having her first child.  Raising her child became her full-time job for several years, but the break made it difficult to go back to work once it was time for her child to start school.  That’s when she decided it was time to pursue her university degree.

Her goal was to attain her law degree, as working at a court clerk in Fort St. John brought her into contact with a variety of judges.  “We get a lot of judges from all over the province coming up because lawyers who get promoted to judges can’t judge former clients,” and in a smaller town that only has a few lawyers, that means a significant portion of the population.  She found herself impressed by how she “saw how much judges cared.  How much they really want to help people go on a better path.”

She continued, “Being a stay-at-home mom I didn’t feel like I was making an impact on society, so I think that’s part of what my motivation has been.  I want to leave the world a better place than when I came into it.  I’m a big picture person, so there’s not one specific cause that gets me going, it’s all interconnected, I look at this big system we have, and see it’s not working it’s not benefitting”

Right now, she’s taking her Bachelor of Professional Arts, specializing in Governance, Law, and Management from AU, but she started at the University of Calgary with a goal to get into law school.  But, at a “brick and mortar school, you’re on campus full time, there’s labs and other things that are just not something that you can do as a mature learner with other obligations.”  She noted that being a parent made attending in person too difficult, “the courses I had to take I had to take.  I couldn’t pick and choose, so it meant if wanted to stay at U of C I’d be at school from 9am to 9pm.”

While law school is considered a challenge under most circumstances, Stacey has the additional complication of dyslexia factoring into her decision.  “It’s fine outside an educational setting,” she notes, “but the school system really breaks you.

“I can’t do multiple choice exams”, she explains, “I interpret the question differently, so, if I can answer as an essay, I can explain and get it right, but because multiple choice is standardized, I get it wrong.”

“That’s why I like AU.  The U of C was all multiple-choice exams, whereas here most of my exams are essays.  I know some people don’t like writing their answers, but I prefer it because I can just sit there and keep going and hopefully get something.  But trying to read what I write is a nightmare as I can easily fill several pages with a single question,” she laughs.

Still to take the LSAT, lately she’s found herself re-evaluating her goal and considering perhaps attending graduate school or moving into the workforce when she’s completed her degree.  With only eight courses left, she notes that she’d hoped that she’d have firmed up her decision by now.

I asked whether the dyslexia makes it harder to read her materials, and she notes “Basically I listen to everything. When I first started, I got a grant for software—it was like $2,000 for the software to convert text to audio—but now it’s just included as standard on PC and Macs, so it’s getting easier and easier.”

As to her experience with online learning, she notes “It’s been good.  Compared to brick and mortar it’s more work, but my GPA has gone up because I’m able to do more work.  Brick and mortar is more like high school, so I was able to coast.  Here there’s no professor telling you what you need to know, you actually have to know the stuff.”

Her favorite course at AU so far has been Criminal Justice 377: Issues in Access to Information and Privacy Protection.  “I always think this type of stuff would be boring, but I took this course and liked it because it reminded me of the book 1984.  I really like that book.  It’s pretty relevant for today too, with the pandemic and how much our privacy has shifted with that.  I liked the course because I never really thought about those issues before.” 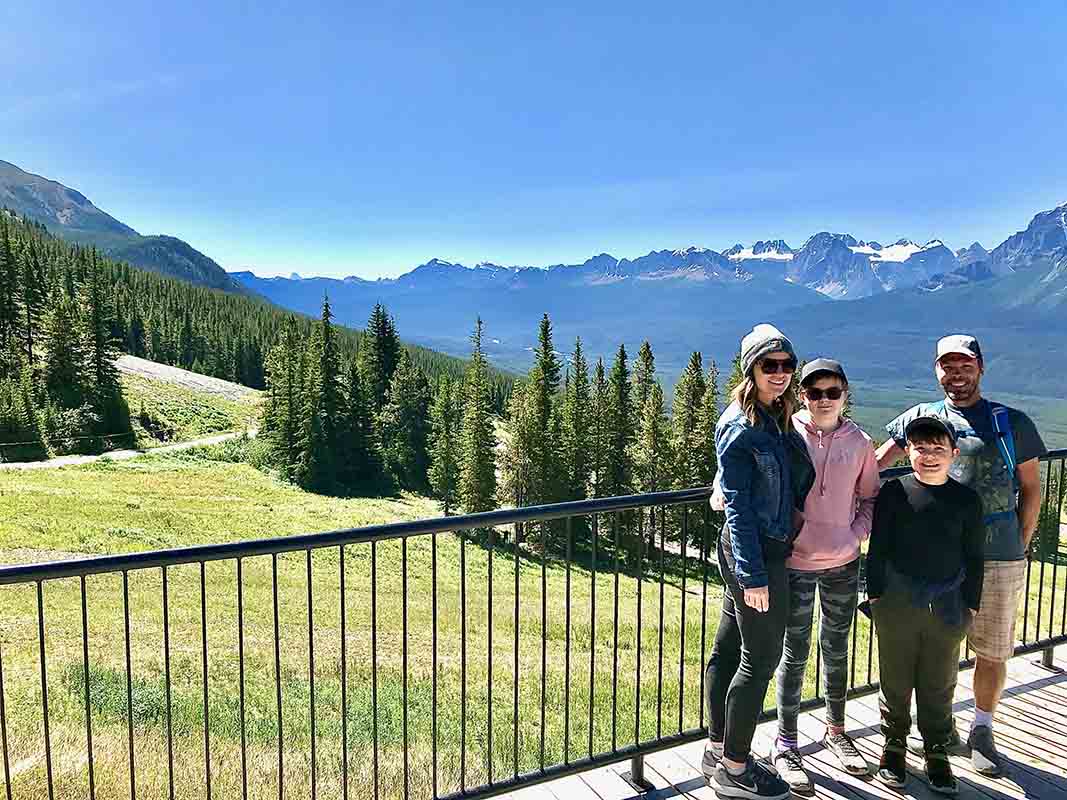 Of course, with that, I had to ask her about the ABTraceTogether App, and she responded, “I wouldn’t use the app; I don’t see the point in it yet because each province has their own.  If there was one app that Canada owned, that would make sense.  It’s kind of weird they need to go through an app, considering Google already tracks our movement, that’s how they know who’s in what store and what time.  The problem is that not enough people have bought into it.”

Having been to both brick and mortar and now Athabasca University, I asked how she found the communication with course tutors as opposed to her previous experience.  “Hit and miss,” she responded, “it’s weird to me, when you’re at a brick and mortar institution, even in the bigger classes, you can still get some face time with your professors.  It’s not the same at AU.  I hope that they will maybe shift in future.  I wish that there was more interaction, because as a student it’s hard to know what to do to reach out if you don’t have questions but you want to get to know your tutor.

“To get into law school,” she noted, “you need to have references from professors.  How do you do that at AU?  AU courses have mostly taken the course boxes you used to get mailed to you in the 90s and just put them online—for the courses I’ve had, at least—they haven’t gone into online or interaction with peers very much.  I ‘d love to see that integrated into the AU space, though I don’t know if it happens in other programs.”

On a more personal note, she points out that the most valuable lesson she’s learned in life has been “To reach out for help when you need it, something I still struggle with.  I’m dyslexic, so my first exam—first midterm in university—I got an F.  And then I had professors at the same time saying they were banning laptops in classrooms, and so I reached out to the university’s accessibility centre and they gave me all these tools to help me with my education, and I’d never had that before.

I think being dyslexic kind of made me aware that sometimes the system sucks, and I don’t even have a visible difference.  It has always been something I’m able to hide.”

As a final note, she’s also binging Schitt’s Creek.  “I know, I’m so behind, right when it ends, I discover it.”